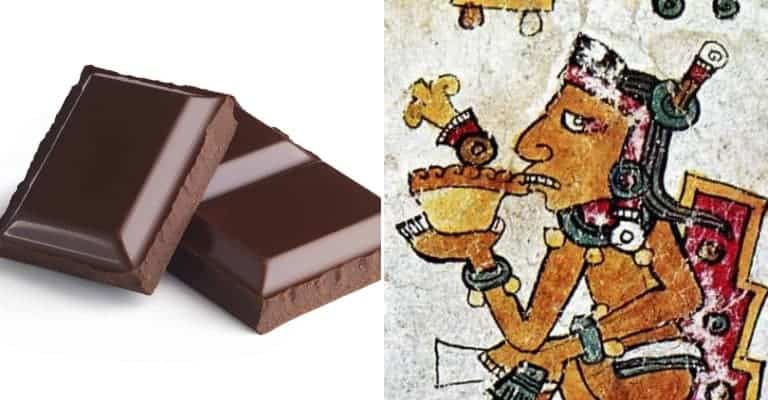 3. Modern chocolate was invented in the 19th century

As mentioned above, all chocolate consumed took the form of a drink until the early 19th century. The key innovation that led to today’s chocolate bar can be attributed to Coenraad Johannes van Houten (1801-87), a Dutch chemist, whose father, Casparus, owned a chocolate factory. In 1828, father and son patented a hydraulic cocoa press that squashed half the cocoa butter from the beans. This all sounds rather dull, but the resultant â€˜cake’ could be smashed into cocoa powder, which is used for making drinks and mixing with sugar to make today’s more familiar form of solid chocolate.

The bar itself, however, was not invented until 1847, when the British confectioner Joseph Fry (1777-1861) learned how to add the cocoa butter back into the mixture to make a mouldable substance that could be sold in bars. Other companies, such as the more familiar Cadburys, soon followed suit. Milk chocolate, the most popular form of modern chocolate, was invented in 1875 by the Swiss chocolatier Daniel Peter, who added powdered milk invented by his neighbour Henri NestlÃ© into the paste. The resultant product was so successful that the pair founded… you’ve guessed it, NestlÃ©, the world’s largest food company.

2. When chocolate arrived in Spain in 1528, it was used as a medicine

When the drink that HernÃ¡n CortÃ©s was served by Montezuma eventually found its way to Spain, it proved puzzling. Remember, this wasn’t the delicious, sweetened hot chocolate that we enjoy of a chilly winter’s evening today, but a bitter liquid flavored with chili peppers. The account of Jose de Acosta, a Spanish Jesuit missionary in Peru and Mexico in the 16th century, gives a sense of their befuddlement: â€˜loathsome to such as are not acquainted with it, having a scum or froth that is very unpleasant [to] taste… [and] yet it is a drink very much esteemed among the Indians’.

However, the Spanish colonists swore by chocolate’s medicinal properties: â€˜both men and women that are accustomed to the country are very greedy of this Chocolate… which they say is good for the stomach and against the catarrh’. Back in Spain itself, this is indeed how chocolate was first used, especially as a laxative. But tiring of the bitter taste, people began adding sugar and honey to the mixture to make it more palatable, and the resultant mixture was nothing short of a revolution. The sweetened remedy was so delicious that people soon forgot about chocolate’s supposed medicinal properties altogether.

1. The links between slavery and chocolate will turn your stomach

The huge demand for chocolate in Europe in the 18th and 19th centuries was met by the then-thriving slave trade. The cacao tree, as we have seen, was a difficult thing to cultivate, and to make the maximum profit from such a labour-intensive product, slavery was the natural answer. At first, the local population in Central and South America were forced to work on the cacao plantations, but when disease wiped most of them out, African slaves had to be imported to undertake the back-breaking labour. The chocolate industry was thus directly responsible for the enslavement of thousands of people.

But here’s something that will turn the chocolate you’re eating to ashes in your mouth: much of today’s chocolate is still the product of slavery and child labour. Across West Africa, where about two-thirds of the world’s cocoa is grown, children and adults are forced to work the plantations for little or no money, all to cater for the world’s sweet-tooth. In 2015, Tulane University researchers revealed that a shameful 2.3 million children were working on cocoa production in the Ivory Coast and Ghana alone, 90% of whom were slaves. The chocolate industry is yet to take any significant action.

Chrystal, Paul, and Joe Dickinson. A History of Chocolate in York. Barnsley: Remember When, 2012.

Green, Matthew. “How the decadence and depravity of London’s 18th century elite was fuelled by hot chocolate.” The Daily Telegraph, March 11, 2017.

Zarillo, Sonia, et al. “The Use and Domestication of Theobroma cacao During the Mid-Holocene in the Upper Amazon”. Nature Ecology & Evolution 2, no. 10 (October 2018).