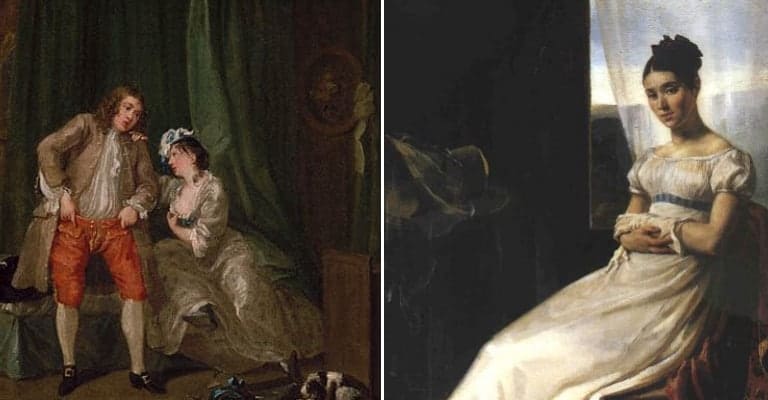 Wealthy residents of Regency England had rich diets full of fat and, most importantly for their teeth, sugar. Unfortunately for them, dental hygiene and practice was still incredibly rudimentary science. Consequently, the wealthiest people in the Regency Era had the worst teeth. Since rotted teeth were so widespread among the upper crust, dentistry was a booming industry. Jewelers, blacksmiths, wig makers, and other professions all jumped into the dentistry craze. False teeth were often crafted out of ivory, bone or porcelain at an incredibly high cost. The most expensive treatment was replacing a pulled rotten tooth with a live tooth, often from a live “donor” or fresh corpse, which spread disease.

In a morbid, yet fortunate, turn of events for those in need of teeth, over 47,000 soldiers died at the Battle of Waterloo in 1815. After the battle was decided in favor of the English, people scoured the battlefield harvesting healthy teeth from the mouths of the fallen soldiers to make dentures for the wealthy back home. “Waterloo teeth” became incredibly prized for dentures since they came from mouths of healthy young men and were relatively unaffected by decay. The teeth would either be fitted into a single empty socket or crafted into dentures with an ivory base. While this treatment is horrifying, at least it didn’t spread disease.

When the wealthy traveled in Regency England, they would often stay at the homes of other nobles as a guest. Regular working folks had no such luxury and were forced to remain at coaching inns. Such inns were a common sight along Regency roadways and offered a cheap frill-less overnight stop for poor travelers. Due to the high demand for such services, the inns were constantly packed. The owners of such inns were of low social status and didn’t have much wealth themselves, so expanding their inns and buying more beds was out of the question. So, what does an enterprising coaching inn owner due to meet demand? Make the guests share beds with each other, of course!

As horrifying as this sounds, communal bed sharing among travelers was standard practice throughout the west in the 17th and early 18th centuries. The method was so conventional that there were rules of etiquette surrounding the sharing of a communal bed. One was to lie still, be quiet, keep one’s hands to oneself, and not hog the blankets. Founding Fathers Benjamin Franklin and John Adams famously (and hilariously) broke these rules by spending a night at an inn fighting over whether or not to sleep with a window open.

5. Unmarried Couples Were Sewn Into Bed Together

Bundling, or tarrying, is an old tradition in which an unmarried couple that was courting would spend a night in bed together with some sort of barrier between them to prevent premarital relations. This practice was believed to encourage intimacy in a courting young couple without allowing for any sinning to happen. There were many forms of bundling including placing a board down the length of the mattress to create separation or using a rolled-up wad of bedding along the bed for the same purpose. Another way is having the man lay atop the covers and the woman under, wearing unique sack-like clothing that was difficult to get out of, or both people laying in a sack with a seam sewn down the middle.

While some religious leaders preached against bundling, it remained a widespread practice well into the 19th century, especially in the United States. The practice was especially popular among Pennsylvania Dutch settlers and Amish settlers. It is believed that bundling may still be used during courtship by the Nebraska Amish community today. While it is a charming system, in theory, it’s hard to imagine that amorous youngsters who intended to be married wouldn’t have been able to figure out how to outsmart a board or a sack.

Many older folks today complain about the lewd nature of today’s music. However, many of today’s rappers and pop stars had nothing on the troubadours of the Regency Era who sang songs that could positively make you blush. A favorite folk song of the era was “A Lusty Young Smith.” It is a rather frank depiction of a tryst between a married woman and a young blacksmith, with one surprisingly explicit verse describing the frequency of the encounter saying,

Another rather raunchy folk song of the period was “The Trooper Water His Nagg” which was a humorous story of a man stopping to water his horse and eventually whetting his appetite with the innkeeper’s daughter. The ribald end of the song is the man in woman discussing what to do together in bed, with the lines:

“But what is this hangs under his chin?”
“‘Tis the bag he puts his Provender in.”

Quoth he, “What is this?” Quoth she,” ‘Tis a well
Where Ball, your Nag can drink his fill.”

“But what if my Nag should chance to slip in?”
“Then catch hold of the grass that grows on the brim.”

“But what if the grass should chance to fail?”
“Shove him in by the head, pull him out by the tail.”

3. Pig’s Tongues Were a Delicacy

Pork was an everyday staple for middle and upper-class diners of the Regency period. Little of the animal went to waste, with the pancreas, called sweetmeats, and head being common delicacies of the age. At dances, finger foods were highly prized as they allowed revelers to mingle and continue dancing while eating. This was much preferable over a massive, multi-course seated dinner that would surely get boring quickly to the young attendees with courtship on their mind. One tasty finger food was chicken stuffed with pigs’ tongues. Pig’s tongues were, in general, considered a delicacy to be savored when served a whole pig’s head.

Beef was another favorite food during the era, taking on a primarily political air during the war against the French. Dining clubs sprung up that focused heavily on eating beef, as it was unpopular in France at the time and considered by the British to be an unpretentious patriotic food that set them apart from continental Europeans. Eating specific foods or renaming them for political purposes is an old tradition that persists into our time, with hamburgers being renamed “liberty steaks” during World War I and french fries being called “Freedom Fries” in the early 2000s when France refused to support the United States’ war with Iraq.

Anyone who has ever had to sport shapewear or an elaborate dress knows that it isn’t always convenient, or even possible, to remove your garments in a way that facilitates using the bathroom. Regency Era women certainly knew this, given the layers of slips, dresses, and outerwear that would have comprised their daily attire. It should be a little surprise, then, that the clever women of the era had ways of using the bathroom while hardly having to adjust their clothing at all. Starting in the 18th century, women used fanciful gravy-boat like vessels called bourdaloues to do their business.

The bourdaloues were typically made of porcelain or metal and genuinely do look like small gravy boats minus a spout. They had a handle on one end and were curved inwards in the middle to rest comfortably against the user. For wealthy women, a maid would be waiting nearby to enter the pot after use. A painting by Francois Boucher shows a woman in full dress preparing to use a bourdaloue. Reportedly, women would use them in public, merely standing in a dark hallway or behind a curtain to relieve themselves. The advent of water closets in the 19th century put an end to the practice of using bourdaloues.