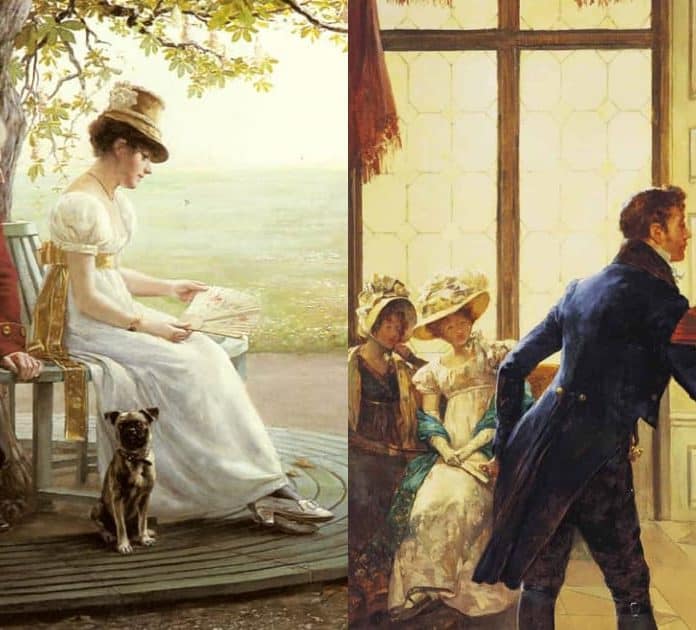 “A woman’s reputation is as brittle as it is beautiful,” notes Elizabeth Bennett in Jane Austen’s Pride and Prejudice, a classic of Regency-era England. Indeed, being a woman in these times was far from easy. Of course, ladies of the upper and upper-middle classes didn’t have to worry about ending up in the poorhouse or struggling to feed their children. However, even wealth and social standing were no guarantees that a lady would enjoy a fine reputation. Instead, a lady’s reputation was based largely upon how she behaved herself, both in public as well as in the privacy of her own home.

As anyone who has ever read a Jane Austen novel (or watched a TV or movie adaptation of one) knows, there were strict rules to follow when it came to matters of etiquette and decorum. For their part, gentlemen were expected to behave in a chivalrous but aloof, even cold, manner. However, it was ladies who had the most rules to follow. Indeed, there were rules for almost everything, from walking down the street to eating and dancing, and failure to stay within the lines of decency could stain a lady’s character for good. Since a Regency-era lady’s reputation could determine her future – including her chances of a good marriage – most were careful to keep up-to-date with the latest thoughts of proper etiquette. And, thankfully for the historian, some of the many etiquette guides published between 1800 and 1825 still exist today, allowing us a glimpse into this fascinating period.

So, here are ten of the rules a lady in Regency England needed to follow if she wanted to maintain a good reputation among her peers:

DO stand straight and walk tall

In the many etiquette manuals of the time, whole sections were often devoted to how a lady should move – or even how they should stay still. Indeed, there was nothing you could do that wouldn’t be judged by the rest of polite society. And, while some rules were very complex, and indeed sometimes contradictory, when it came to sitting and walking, it was quite straightforward: keep it elegant, refined and, above all, keep it ‘ladylike’.

Above all, the Regency era was obsessed with correct posture. This meant keeping your back straight at all times. While sitting up straight and walking tall was expected of gentlemen too, this was especially important for women. As the manuals of the time noted, a well-bred young lady should move with ‘grace and ease’, appearing the epitome of elegance even when walking from one room to the next or heading to the market in the morning. In order to achieve this ideal, many young ladies used a backboard. These were single pieces of wood, to run up the back, with leather straps to keep them in place. Obviously, with a plank of wood strapped to your back, you were guaranteed to sit up straight at all times. Comfortable or healthy? Definitely not. Ladylike? Most definitely, at least according to the standards of the times.

Ironically, the idea of ‘naturalness’ was highly promoted during the latter years of the Regency era in particular. Moving away from the rigid bodices and corsets of the past, the fashions of the time promoted free flowing gowns. Again, however, often backboards were hidden underneath such feminine fashions. Or, more commonly, bad habits such as slouching or even natural ‘deformities’ like a curved spine, were ‘corrected’ during childhood and early adolescence so that a lady looked as she should when she came out in society and was ready to court.