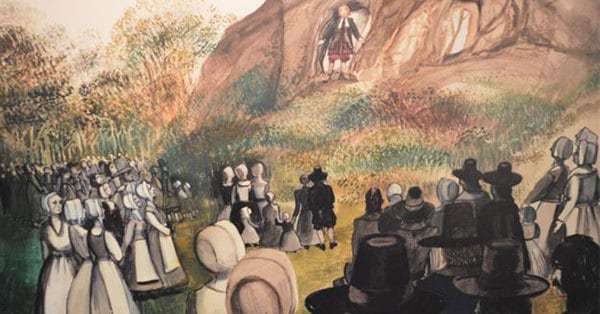 In 1665, the last major outbreak of bubonic plague came to England. Known as the Great Plague of London, it devastated the overpopulated city for almost two years. Thought to have come from an outbreak in the Netherlands, it killed up to 7,000 people a week and close to 100,000 people overall. There was chaos in the streets of London. The rich and middle-class left the city, leaving the poor and those who didn’t have the means to leave to perish. As the plague spread throughout the city, trade had almost entirely stopped, and businesses were closed.

Eventually, as the disease spread, people were prevented from leaving, whether they were healthy or not. Crosses marked the homes where infected people lived. The homes marked with crosses were barricaded, so even if you weren’t sick, you were sure to die soon. People left their dead family members in the doorways of their homes for the men driving the plague carts to pick up to bring to the plague pits. When the death toll reached its highest point, the pits looked like mountains of dead bodies.

Although the Great Plague was concentrated in London, it spread to other areas–wherever the fleas infected with the disease went. It is believed to have arrived in Eyam, Derbyshire in a box of cloth. Edward Cooper was a trader who lived in the village, and his servant George Vickers was the first person to touch the cloth. Vickers separated the samples and hung them up to dry since they were damp when they arrived. Within four days, he had died of the plague. Others in the household soon died, and Cooper himself was dead two weeks later.

The people of Eyam were beginning to panic. Another 26 people had died by the end of the next month. The deaths slowed down during the winter months, but by summer 1666, 1/5 of the town’s small population of 360 were dead. Many were threatening to leave the town, which would, according to scientific thought at the time, spread the plague further. The people of Eyam turned to the town’s religious leaders, Thomas Stanley and Reverend William Mompesson, for guidance.

Thomas Stanley, the former rector of Eyam, still lived in the small town. He was a Puritan dissenter who had refused to convert to the Church of England when the monarchy was restored in 1660. Although he lost his position, Stanley remained in the town to train his new successor, Reverend William Mompesson. When the plague broke out, Stanley and Mompesson joined forces to reassure the people of the town. The two men had an interesting idea, one that would take some major convincing.

Mompesson and Stanley convinced the people of Eyam to stay and help each other, instead of leaving the town and spreading the plague further into the district of Derbyshire and points beyond. How they managed to convince everyone to stay and face certain death is in itself an incredible feat, but they stayed. They established some ground rules to keep exposure to a minimum. Families would bury their dead family members near their homes, not in the communal churchyard. They moved the church’s religious services out of the closed-in church to the open-air amphitheater at Cucklett Delph to give everyone spiritual guidance, but to also allow people to separate the sick from the healthy.

Eyam’s neighbors recognized the efforts that Eyam went through to prevent plague outbreaks to save others. People from neighboring villages would leave food and supplies near boundary stones at the outskirts of town for them. The people of Eyam would then leave vinegar-soaked money, which was believed to kill the infection, on the same boundary stones as payment for the goods. Eyam effectually became a plague quarantine for over a year, closing itself off from the outside world. The town suffered greatly, losing ¾ of its inhabitants. Church records claim that 273 people died of the disease from 1665-1666.

Everyone who lived in Eyam lost someone. In some cases, people survived despite repeated exposure, while in others, whole families were wiped out. A woman named Elizabeth Hancock survived the plague but buried six of her children and her husband within an eight-day period. Marshall Howe, the town’s gravedigger, also survived, although he handled many infected dead bodies in a single day. However, the Reverend’s wife Catherine Mompesson, who spent her last days visiting the sick, was one of the last people who died during the outbreak.

We now know that the steps that Eyam took probably did them more harm than good. By isolating themselves the way they did, they probably increased the number of people that died. Plague still reached other areas of Derbyshire, with many deaths recorded in some areas. This was exactly what the people of Eyam were trying to avoid. Still, we will never know how much worse the death tolls in Derbyshire would have been if Eyam hadn’t taken the steps that they did.

Eyam now owns its history as the “plague village.” Since 1866, the two-hundred-year anniversary of the outbreak, the people of Eyam have celebrated Plague Sunday to honor the dead, and they lay a wreath on Catherine Mompesson’s grave. Eyam Museum has an exhibit that focuses on the town’s plague history. Eyam Parish Church houses many records from the time. The cottages where the outbreak is believed to have started, the boundary stones where people left food and vinegar-soaked money, and the gravestones where people had to bury their dead are now tourist attractions. So, was it worth it? To the people of Eyam, it is.

History Extra – Black Death Quarantine: How Did We Try To Contain The Deadliest Disease In History?

The Londonist – London’s Seen Much Worse Than Coronavirus: Remembering The Great Plague Of 1665

BBC Travel – Did This Sleepy Village Stop The Great Plague?

Associate Press – Village Remembered For Sacrifice Of Residents During Plague