Thousands Died From the Black Death in 1666, Leaving Behind Haunted Plague Pits in London 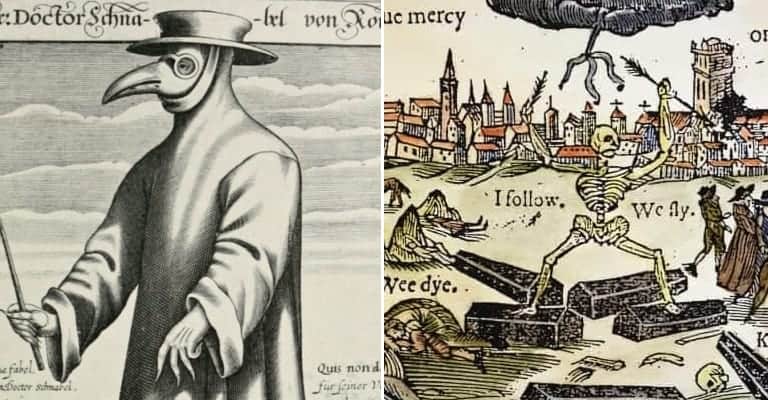 Thousands Died From the Black Death in 1666, Leaving Behind Haunted Plague Pits in London

From 1665 to 1666, London, England suffered an outbreak of the deadly Bubonic plague known as the Black Death. Over 100,000 people began to develop huge sores and black spots all over their body. They coughed up blood from their lungs, and died within just a few days. One-fifth of the city’s entire population had died, and there were so many bodies that piled up, they had to be picked up off the street and pushed in carts to be dumped in mass graves.

The citizens of London were terrified of getting sick, especially since no one knew where the disease came from. Red crosses were painted on the doors of the infected, and plague doctors wore masks that resembled some sort of hellish bird creature. Some people believed the plague was the work of the Devil, and that the sickness was a punishment for the world’s sins. It was, after all, the eve of the year 1666. Others thought the disease oozed from the gasses of the Earth itself. In reality, it came from fleas that were carried on rats, and it was spread through the air.

Hundreds of years later, construction workers in London still uncover clusters of plague pits beneath the city streets. In 2015, a particularly large grave was uncovered as workers were in the process of building a new subway station underneath the city. Some say that with these bodies dumped so carelessly into plague pits, the spirits of the Black Death victims still roam to this day. Even though these ghost stories are mostly likely figments of people’s imaginations, the legends still give us a look into just what happened during the Great Plague of London.

The Haunted Catacombs Under London Bridge

During the 17th Century, London Bridge was used as a spot to display the severed heads of men who were executed as traitors to the crown after they had been tortured to death. One of the most famous executions on the bridge was Guy Fawkes, who is remembered for his attack against British Parliament, and the rhyme that remained: “Remember, remember, the fifth of November, the gunpowder treason and plot.”

The bodies of these criminals were dumped at the base of the bridge without receiving a proper Christian burial. During the Black Death, cemeteries were filling too rapidly, and they ran out of places to bury people. More bodies were added to this same pile, since it had already been used as a mass grave, anyway. However, the bodies of the victims of the plague were treated just like the criminals of the past, and they were never laid to rest with respect.

In 2007, construction workers went into a tunnel under London Bridge to do some maintenance. They were shocked to find hundreds of human remains lining the walls. Concrete had been poured into the base of the bridge without any regard for the bodies that were there since the 17th Century. At first, they refused to go in the tunnel, because it gave them the creeps. However, they were reassured that they had nothing to worry about. One of the contractors, a man named Michael Buxton, said that he felt as if someone was watching him at all times, even when he was alone.

As the construction workers began to work on the project, their tools would mysteriously go missing while they went on their smoke or lunch breaks. This could be explained by a human thief, but over a dozen brand new light bulbs would also blow at random, plunging them into darkness at inconvenient times. They checked the electricity, and changed the light bulbs, and yet this kept happening over and over again. Imagine feeling as if someone is watching you as you stare at one of the man skulls encased in the wall, and suddenly, everything goes black.

After this story was reported to the BBC, curious ghost hunters started to visit these catacombs under London Bridge. Many people began to report far more extravagant ghost sightings like floating heads, and attacks from a poltergeists. After getting so much attention for this supposedly haunted plague pit, the tunnel is now a haunted Halloween attraction called “London Tombs”.

In the year 1863, the city of London began the construction of their underground subway system, also known as “the tube”. Looking at the London subway maps today, the design seems a bit odd, because the tracks go in a zig-zag pattern, rather than having the trains traveling back and forth in straight lines.

Once the workers began digging underground, they uncovered these massive plague pits. According to a researcher named Catharine Arnold, engineers found pits “so dense with human remains that they could not be tunneled through”. They had no choice but to go around the piles of dead bodies.

People working for the government say this is just a rumor, because there are no written records that indicate that the plague pits caused a problem during original construction in the 1800’s. However, it’s possible that the city did not want this on the record, because it may be interpreted as disrespectful to the dead.

Many people heard the stories that have been passed down over the years that the plague pits truly were the cause of the subway design, and the most recent 2015 expansion of the subway system uncovered a plague pit right away. With so many workers on the site, it was impossible to silence them. After all- with over 100,000 bodies buried in mass graves underneath the city streets, it would be impossible not to encounter at least one when digging tunnels under London.

In 2016, a reporter for the BBC did a lot of research into the construction of the London subway system, and learned that the workers did, in fact, find hundreds of bodies from plague pits, and that the government attempted to cover it up. In some cases, the bones were dropped inside of concrete arches and pillars, because they had no idea where else to hide them.

The Aldgate Station is rumored to have been one of the only spots where they had no choice but to build directly on top of one of the plague pits, instead of moving around it. This means that the remains of the dead were mixed with the concrete, or their bones were simply discarded during the construction process. There have been several reports of strange sounds echoing in the Aldgate Station, specifically by employees who are there alone at night.

The worst recorded event to ever happen at the Aldgate Station was when an electrician was working on some faulty wiring. Suddenly, he became electrocuted, and it sent a jolt through his body. His co-workers were nearby, and turned to look at their friend. Just as he began to convulse with electricity surging through his body, the co-workers say that they saw a ghostly woman wearing 17th Century clothing standing over the man and stroking his hair, as if to comfort him.

The Ghostly Orb In Knightsbridge and South Kensington

In 2016, a woman waiting for her train in the London Underground saw a ghostly apparition and a glowing orb inside of the tunnel at Knightsbridge and South Kensington Station. She pulled out her cell phone to capture the footage of what she believed to be paranormal activity. The only news outlet that was willing to run the story was a tabloid called The Express. Her video was posted on their website, along with a description of where and when she saw the ghosts.

The woman who submitted the video did not want her identity to be published, and she did not want any attention from the story. She just wanted people to see what she saw. According to rumor, that train station is home to one of the many plague pits, because it is near one of the curves in the subway line, which would indicate that it’s avoiding corpses. Of course, there are plenty of people who dismiss this story as a hoax, or a misidentification of some other lights that may have been on inside the tunnel.

For as long as people tell stories of the plague pits underground, people will probably continue to feel spooked by the possibility that the victims of The Black Death.

The Strange, Gruesome Truth About The Plagues Pits and The Tube. Amanda Rugeri. BBC. 2016.

The Subterranean Terror of the London Tombs. Buzzfeed. 2017