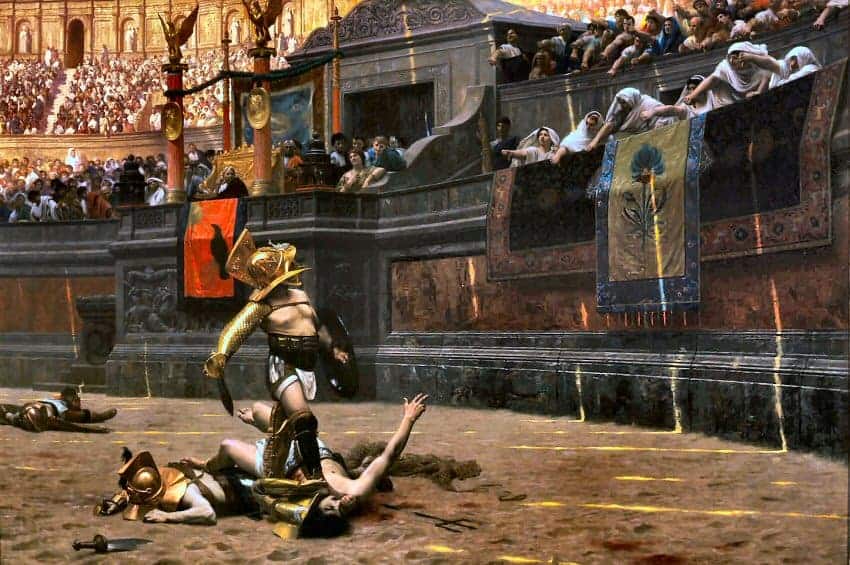 10. After Everything, Their Honor and Bravery Determines Their Burial

After all the valor and bravery, how a gladiator fought still determined their grave. Heroic gladiators who died bravely in battle were often cremated. Friends and family were allowed to recover the body for funeral rites. After the cremation, the ashes would be buried with offerings. In some places, the body’s would have single graves as we do today set aside for them. To this day these graves are being uncovered and shedding light on the lives of Roman gladiators.

As usual, cowards and disgraceful fighters weren’t given the same luxury. If the bodies remained unclaimed, they would be tossed into the river or dumped on a wasteland to rot. As they insulted their people, a body remaining unburied was also considered insulting. The Romans believed that a soul could not rest and move on until the body was covered by dirt. It’s possible that the bones may still remain in these wastelands if found by anthropologists and historians. For now, we’ll never know.

11. Surprise! Women Were Gladiators Too

This whole time we talked of men as gladiators as if they were the only ones. Well, they weren’t. Battling to death can get boring even with the spectacles and entertainment training. One can only see someone getting ripped to shreds or stabbed so many times before it becomes stale. The organizers were always looking for new angles to keep the games fresh and exciting. In comes the idea of women gladiators. These women were known as the Amazones, based on the ancient myth of warrior women.

Even during Ancient Rome, these women were a myth that they could use as a marketing ploy to keep people coming back. The Amazones are talked about in the writings of Tacitus, Suetonius, and Martial. They were depicted in Roman art, most notably in loincloths with no helmets. This was so the crowd could see their hair and much of the body to further entice them. These women became so popular we have references of them today with Wonder Woman, sexy costumes, and featured in TV series and films.

12. Roman Emperors Like To Play Dress Up As Gladiators

There are many films out there were we see Roman Emperors step into the arena to battle. Again we step into the film Gladiator because it has one of the most accurate depictions of this idea. Commodus enters the arena to fight because he saw himself as god-like and loved being compared to Hercules. He was pompous living in a fantasy world and would often go dressed as Hercules into the arena to fight. He often arranged for an amputee or exotic animal to be paraded in front of him before he clubbed them to death.

Commodus also charged a hefty fee for his appearances, and the organizers were much too afraid to refuse him. Commodus wasn’t the only one who enjoyed the sand under his feet and blade in hand instead of the comfortable viewing box. Emperors Hadrian, Titus, and Caligula also appeared as gladiators. They may have fought opponents with blunted weapons and other safety precautions in place since we wouldn’t want the death of the Emperor at the hands of a mere gladiator.

13. They Didn’t Just Fight People, They Fought Animals Too

Now we come to the famed depictions of gladiators fighting lions, and tigers, and bears (oh my.) But why did they fight exotic animals instead of humans sometimes? They were fresh, unusual, exciting, and allowed spectators to see the vast nature and riches the Roman Empire had to offer. Animals were expensive so organizers only used them when they pulled out all the stops. There was even a special name for a gladiator who specialized in animals called a bestarius.

Not all of the animals were sentenced to die in the arena. Some were trained a circus exhibits but the bloodlust for death and entertainment often caused the animals to be transported to their deaths. The animals were used in the ring in a variety of ways. They would combat with the bestarii or used to kill undesirables such as Christians, torn to bits in front of a large crowd. The use of animals led to high trade and almost caused extinction. The hippo disappeared from the Nile and the European Wild Horse and Eurasian Lynx became extinct.

14. Gladiators Were Ranked Based On Performance And Fighting Method

There wasn’t just one type of Roman gladiator. The most well-known of these fighters were the retarius, murmillo, and the secutor. The retarius was armed with a trident and a net but had very little armor, he was fast but very vulnerable. The retarius usually fought a secutor since they were more heavily armored with a helmet and shield in addition to their swords. Murmillos were even more heavily armored than the secutors. Provocators fought each other with a sword and shield wearing full body armor and a helmet with a visor.

Other popular types included the hoplomachus, eques, Dimacherius, and the Saggitarius. The hoplomachus were armed with a lance, dagger, and a small shield. The eques fought on horseback and then moved to the ground but the essedarius rode chariots and were armed with lances and swords. The Dimacherius were armed with only two daggers and the Saggitarius only a bow. The most bizarre gladiator was the andabatus which fought on horseback and carried a lance. Their faces were completely covered by their helmets so they were unable to see their opponents.

15. Gladiators Had Their Own Labor Unions, Like The Teamsters and Jimmy Hoffa

One would never think a gladiator would be part of a trade union, but they were. They called these unions the collegia. In return for consistent payments, the collegia would make sure the fallen gladiator would be buried properly with a decent funeral and a grave marker. The collegia would also see that the gladiator’s wife and children would receive a small amount of compensation. Sometimes if a gladiator didn’t have a subscription, his colleagues would band together and pay for it.

If a gladiator didn’t have a subscription or his friends couldn’t afford to chip in, he would receive no burial at all. If the body wasn’t thrown into the river, it would be carved up for animal trainers. The trainers would feed the meat to their animals for training. The animal would get used to the smell of human flesh and be more prone to attack in the arena. The collegia were democratic with elected leaders and had their own gods they would pray to.

16. Thumbs Down Did Not Mean A Gladiator Was To Die

The signal of a “thumbs down” has a negative connotation in our society. The thumbs down had to come from somewhere, but it wasn’t the Romans like we think. The thumbs-down gesture to signal death is a misconception. We know that the final death call was not up to the victor, but to the editor. The editor would listen to the calls of the crowd and then make his final decision. The editor was the senior official in attendance, usually a Governor, a Senator, or occasionally the Emperor himself.

The writings of Juvenal state that if the thumb is pointed up, towards the heart, the fallen should be put to death. If the thumb was pointed down towards the ground, that meant the victor should lay down his sword. So how did we get it messed up? The painting from Léon Gérôme in 1873 famously mixed up the Latin translation and he painted the thumb down instead of up. The famous painting has now changed Roman meaning that thumbs up means good, and thumbs down mean bad when it was the other way around.

17. Gladiator Games Were Part of Roman Life for 700 Years

When we look through history, some customs last a mere few years and some last centuries. Unlike American culture where fashion trends died quickly and other cultural norms, Roman culture didn’t change much. Gladiator games lasted from 300 BC to 400 AD. The Romans thought the concept came from the Etruscans but the Campanians were recorded having games in 310 BC to celebrate an important military victory. A few years later in 246 BS two brothers, Marcus and Decimus Brutus, held a small funeral game consisting of three fights and a cattle market to honor their father.

Other families saw the games as political prestige as it played into Roman belief that the souls of the departed needed human blood. As more and more families started to put on games lanistas or gladiator trainers started to cash in on the trend by training gladiators for combat. Julius Caesar saw a good thing going and ordered 320 games to commemorate the death of his daughter Julia. He also realized that gladiators could be used in place of a private army.

Andrews, Evan. “10 Things You May Not Know About Roman Gladiators.” History.com.

Mandal, Dattatreya. “12 Things You Should Know About The Ancient Roman Gladiators.” Realm of History.