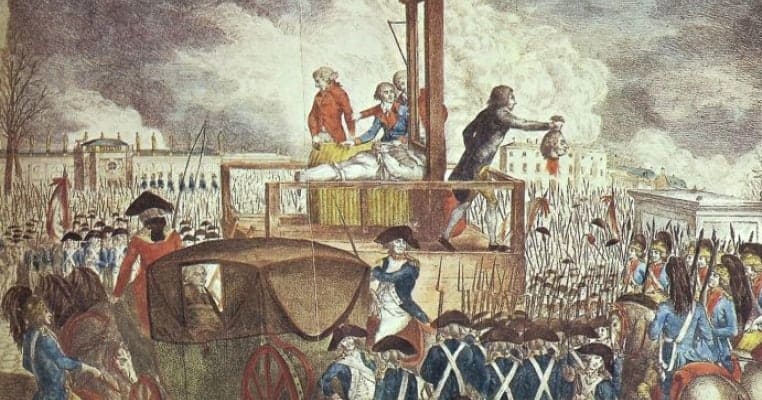 Antoine Quentin Fouquier-Tinville was widely considered to be one of the most sinister figures of the revolution, particularly of the Reign of Terror. Having been trained in law, he was the public prosecutor, appointed by the Revolutionary Tribunal. However, many considered him to have carried out his duties in such a way that they only carried with them the appearance of legality when he was actually executing opponents to a political regime. As such, there was little need to establish actual guilt in the people that he sent to the guillotine.

Towards the end of his career (and life), he prosecuted a group of nuns, who had allegedly acted as fanatics against the state and attempted to foment rebellion and civil war by providing housing to enemies of the revolution. He labeled them criminal assassins, and the judge duly sentenced all of them, as well as those whom they had sheltered. One of the last people that he prosecuted was Robespierre himself, of whom he had previously been an ardent supporter.

When the Thermidorian Reaction began, following the fall of Robespierre, Fouquier-Tinville was tried with other former members of the Revolutionary Tribunal. They were found guilty and executed in May of 1795.

If Antoine Quentin Fouquier-Tinville was one of the most sinister figures of the revolution, Louis Antoine de Saint-Just was the public face of the Reign of Terror. He rose through the ranks of the National Convention and became personal friends with Robespierre. He wrote the draft of the French Constitution of 1793, the second constitution of the revolution (the first having been written in 1791) that did away with the moderate reforms that had previously been promised.

When the revolution began, de Saint-Just wrote prolifically on social and political theories, with a moralizing tone, in pamphlets and other mediums. He was also impassioned rhetoric, who often moved audiences to tears regarding the principles of the revolution and his dedication to it.

By the time he drafted the 1793 constitution, martial law had effectively been established throughout France. This rule probably suited de Saint-Just just fine, as he was a military leader who was noted for his strict discipline and ruthless zeal for the revolution. When he returned from the war with Austria in 1794, he found that Robespierre had lost much of his power. Still, he continued to give impassioned speeches to the National Convention, even when the threat of physical violence was imminent. He was arrested soon after his return and executed with Robespierre.

Georges Couthon was a leading revolutionary who worked side-by-side with Maximilien Robespierre and Louis Antoine de Saint-Just. He was a member of the radical Jacobin faction and, as a member of the National Convention, voted in favor of the execution of the king. He was also a member of the committee that, with Louis de Saint-Just, wrote a new constitution that legitimated the Reign of Terror. He advocated fiercely for all “enemies of the revolution” to be executed and helped spearhead the moves that led to the deaths of members of more moderate groups, such as the Girondins. He also pushed forward legislation that helped secure the Reign of Terror by ensuring that anyone who resisted the revolution could be swiftly executed.

In July 1794, the Thermidorian Reaction was a revolt against the Reign of Terror. Weary of the excessive executions (as many as 2% of the French people were arrested for supposedly being enemies of the revolution, and 17,000 were guillotined), the reaction led to the arrest of Robespierre, de Saint-Just, and Couthon, amongst other leaders of the Terror. Couthon was executed at the guillotine with the leader that he had so ardently supported. He was one of the last people to die at France’s national razor.

Jacques Cazotte was one of the more interesting figures to be executed in the revolution, and his story illustrates just how far-reaching Madame Guillotine’s fingers were. He was not a politician or otherwise affiliated with the revolution; he was an author and translator who wrote children’s books and translated works by Enlightenment thinkers such as Voltaire. Some of his works had a mystical element and dealt with supernatural beings, like the devil.

Around 1775, Cazotte employed the teachings of the infamous Illuminati, a primarily misunderstood band of intellectuals and Enlightenment thinkers. As a mystic, though, he embraced a more spiritual side of the group’s teachings and believed himself to be a prophet. In fact, one writer, Jean-Francois de la Harpe, claimed that Cazotte had uncannily prophesied even the most molecular events of the revolution.

During the revolution, Cazotte became a Martinist, a member of an esoteric group that focused on a spiritual return to the divine source through a process of illumination or reintegration. He also considered himself to be a monarchist, albeit a mystical one and wrote letters that were seen as antithetical to the revolution. He was arrested in August 1792 and sent to die at the guillotine.

Today, the French Revolution stands as a pivotal point in Western history, when ideals of democracy and Enlightenment quickly gave way to barbarism and frenzied killing. However, it did achieve many things, including the end of the divine right of kings, the French monarchy, and proof that people could successfully rebel against a government that they deemed to be tyrannical.

History Extra – Did the French Invent the Guillotine?