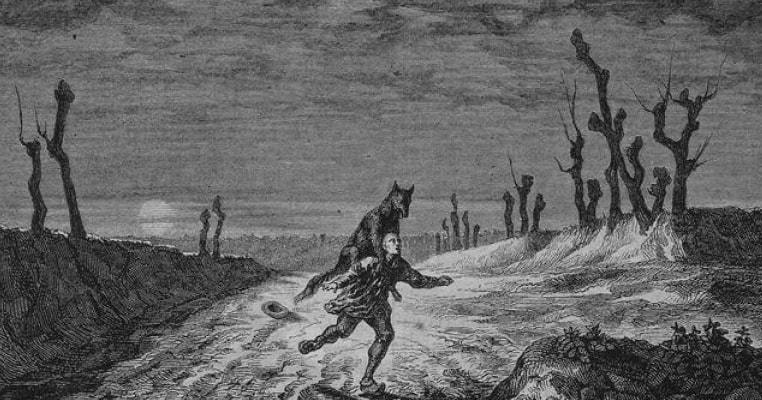 To finish, we return to Early Modern France, seemingly the spiritual home of lycanthropy, and the horrific tale of a tailor burnt at the stake in 1598. His name is long-lost, but he is known as the Werewolf of ChÃ¢lons or the Demon Tailor. Operating from the city of ChÃ¢lons in the Champagne region, the surviving details of his crimes are truly staggering, and simultaneously break several cultural taboos. Unfortunately, the Parliament of Paris, which tried and convicted him, deemed the court transcripts so unpleasant that they were burned, and so we know of the case only through retellings.

By day, the werewolf ran a tailor’s shop on the outskirts of ChÃ¢lons. In classic fairy-tale style, the tailor would often hear children playing outside his shop, and proceed to lure them inside with promises of treats or marvelous things. Once inside, the tailor would sexually abuse them, slit their throats, and cut the bodies up with the skill of a butcher. He stored them in the barrels in the shop’s cellar, which no one had reason to enter. In some versions of the story, the tailor would also commit necrophilia before butchering the children’s bodies for consumption.

His crimes did not stop there, for he also roamed the nearby forests, looking for lost travelers. In the forest, he turned himself into a wolf, stalking the unfortunate victims through the thick undergrowth and tearing their throats out. It seems that he would eat them in the forest, rather than risk being seen carrying them back to ChÃ¢lons. His urban activities seem to have aroused suspicion, for eventually his cellar was searched, and the barrels were found to contain bleached bones and butchered human flesh. It is said that he burned to death blaspheming and unrepentant to his last breath.

The Conversation – The Ancient Origins Of Werewolves

History of Yesterday – Before Salem: The Real-Life Werewolf Trials That Plagued European Nations

Retrieverman – The Wolf of Ansbach

Faolad – Hounds of God: The Werewolf Ritual According to Thiess

Baring-Gould, Sabine. The Book of Were-Wolves, Being an Account of a Terrible Superstition. London: Smith, Elder, 1865.

Flight, Tim. â€˜The Wolf Must Be in the Woods: The Real and Mythical Dangers of the Wilderness’, History Today, June 2017