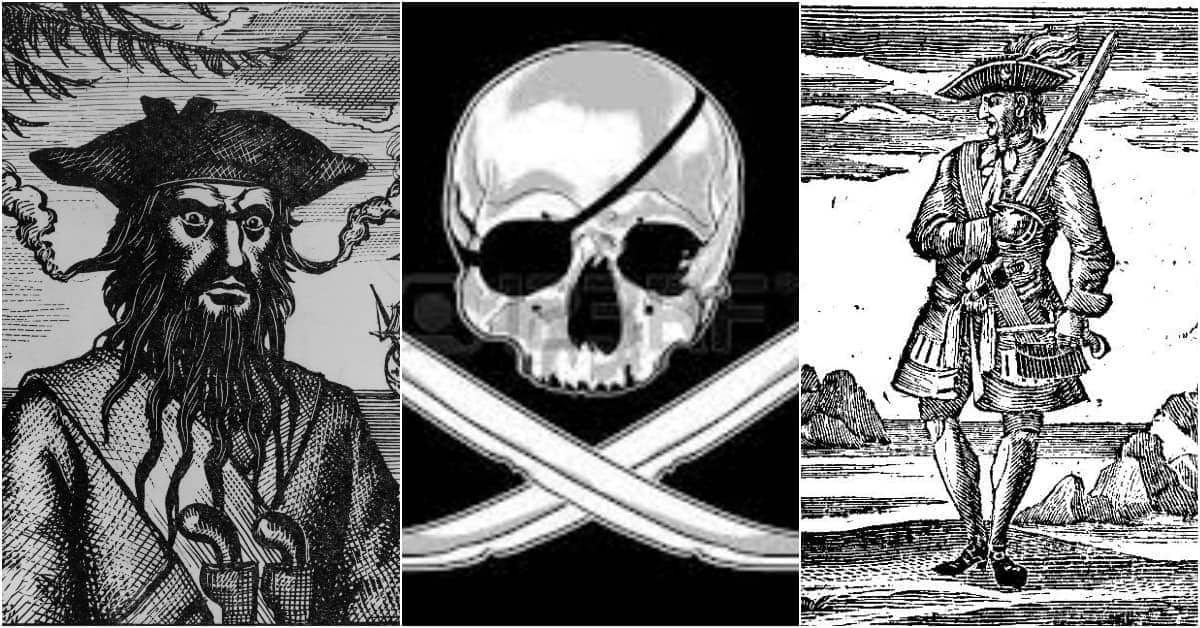 Samuel Bellamy, better known as Captain Black Sam Bellamy (1689 – 1717), earned the nickname “Black Sam” not because of any fell acts or dark deeds of piracy, but because he eschewed the white powdered wigs of his era and grew out his own mane of long black hair instead. He went to sea at an early age and was a combat veteran who’d already taken part in a number of sea battles with the Royal Navy by the time he reached manhood.

In 1715, he went to Cape Cod in search of relatives, and there, news arrived of the wreck of a Spanish treasure fleet in a storm off the Florida coast. Bellamy joined a treasure-hunting expedition that hoped to recover the sunken riches, but when they failed to do, they turned to piracy to recoup their investment. Bellamy fell in with captain Benjamin Hornigold and his first mate Blackbeard of the Marianne.

In 1716, Hornigold’s refusal to attack English ships led his pirate crew to vote him out as captain and kick him and Blackbeard off the ship. Bellamy, who had none of Hornigold’s compunctions about preying on English vessels, was elected captain in his stead. His biggest haul was the Whydah Gally, which Bellamy overtook on its maiden voyage after a 3-day chase, and captured it with a rich haul of gold, ivory, indigo, and other high-value goods. Upgrading it with extra cannon and turning it into his flagship, Bellamy then fell upon the shipping lanes to the Carolinas and New England and feasted.

Likening himself to Robin Hood, Bellamy’s pirate career was brief, lasting little more than a year, but it was one of the most prolific and spectacular years in the history of piracy, during which he captured over 50 ships – which made him the richest pirate in recorded history. He stood out for his shows of mercy, which earned him another nickname, the “Prince of Pirates”. He met his end off Cape Cod, where the Whydah Gally was driven ashore and wrecked by a nor’easter on April 26th, 1717, quickly sinking and drowning Bellamy and all but two of her 145-man crew.

Edward Teach, better known as Blackbeard (circa 1680 – 1718), is probably the most famous pirate of all time. He started his career as a privateer, and in 1716 joined the crew of Benjamin Hornigold, who mentored Blackbeard and taught him the ropes of piracy, and soon made him his first mate and second in commanded, entrusted with his own sloop to operate in conjunction with Hornigold’s main ship.

His appearance was notable and terrifying, with his most defining feature the thick and long black beard from which he derived his nickname. He was in the habit of tying it in braids, each decorated with ribbons. He further enhanced his ferocious image by slinging six pistols across his chest, thrusting a variety of knives and daggers in his belt and, wielding a wicked-looking cutlass. To top it off, he attached slow-burning matches to his beard, which sputtered and emitted thick smoke, and made him appear even more demonic. It was a psychologically effective display, and many ships surrendered at first sight of the ferocious and crazy-looking bearded and smoke-spewing pirate.

After Hornigold retired from piracy in 1717, Blackbeard continued independently on his own. Soon thereafter, he seized a French ship which he remodeled and equipped with 40 cannons, and renaming her the Queen Anne’s Revenge, made her his flagship. He then formed a pirate alliance and used it to commit his most notorious act: a successful blockade of Charleston, South Carolina, holding the city hostage until he was paid a ransom.

In 1718, he accepted a royal pardon, but soon reneged and returned to piracy. Virginia’s governor then ordered an expedition to hunt him down, led by Lieutenant Robert Maynard of the Royal Navy. Maynard tracked Blackbeard with two sloops, and found him on November 22nd, 1718, at anchor on the inner side of Ocracoke Island, off North Carolina. Blackbeard was outnumbered, as most of his men were ashore at the time, but he refused to surrender and put up a fierce fight before he finally went down on the deck of his ship, after taking five bullets and over twenty sword cuts.

John Rackham, better known as Calico Jack (1682 – 1720), is one of the best-known pirates of the Golden Age of Piracy, not because he was particularly successful or much good at being a pirate – compared to other famous pirates, his career was middling and his accomplishments mediocre – but because of his associations with other, more successful pirates, his venality and backstabbing which stood out even in a profession built on venality and backstabbing, because his first mate designed the Jolly Roger flag, and because his crew included two famous female pirates, Anne Bonney and Mary Read.

Nicknamed Calico Jack because of the colorful calico clothes he favored, Rackham was quartermaster aboard the pirate sloop Ranger in 1718, when she encountered a French man of war twice her size, and the pirate captain, choosing discretion over valor, fled. Rackham and the crew decried what they viewed as cowardice, and soon thereafter voted the captain out of the command, and replaced him with Calico Jack.

As captain, Rackham specialized in plundering small vessels engaged in coastal trade but fell upon larger ships when the opportunity presented itself. In 1719, he accepted a royal pardon, renounced piracy, and accepted a commission from the governor of the Bahamas to hunt pirates. However, a love triangle involving Anne Bonney, the future pirate, grew complicated and ended with the Rackham and Bonney stealing a sloop to slip out of the Bahamas, thus voiding Rackham’s recent pardon.

In October of 1720, a pirate hunter chanced upon Rackham’s ship at anchor, while Calico Jack and most of his men were too drunk to offer effective resistance. The only fight was made by the women, Anne Bonney and Mary Read, who offered fierce resistance before they were finally subdued. Captured, Calico Jack was tried and convicted of piracy and sentenced to death by hanging.

His lover, spared the noose after “pleading her belly” – she was pregnant – had little sympathy for him, and when he grew maudlin while bidding her goodbye before his execution, she reportedly sneered: “if you had fought like a man, you would not hang now like a dog!” He was hanged on November 18th, 1720, and his corpse was displayed from a gibbet at the entrance to Port Royal, Jamaica, in an inlet known thereafter as Rackham’s Cay.

Considered the most successful pirate of the Caribbean, Bartholomew “Black Bart” Roberts (1682 – 1722) captured and looted more ships during his career than his contemporaries Black Beard, Jack Rackham, Francis Sprigg, and Edward Low put together. His spectacular success as a pirate was ironic because he had never wanted to be a pirate to begin with.

In 1719, Roberts had been an officer aboard a slaver that was captured by pirates, who forced him to join them. Within 6 weeks, he had impressed his new crewmates so much that when their captain was killed, the pirates elected Roberts their new captain. His career as a pirate captain got off to a spectacular start when, sailing to South America, Roberts came upon a Portuguese treasure fleet assembling in a bay in northern Brazil. Pretending to be one of the convoys, Roberts slipped into the fleet, a wolf in sheep’s clothing. That night, he quietly seized one ship and forced its captain to point out the fleet’s richest vessel, then captured it and fled before the Portuguese escort warships caught on to what was happening under their noses. The loot came to over 40,000 gold pieces, plus jewelry commissioned for the king of Portugal.

That daring deed to start off his pirate career struck a chord and made Roberts. Sailing north into the Caribbean, pirates flocked to his side, and he put them to good use. At the height of his career, he commanded a fleet of four pirate ships and over 500 pirates, and much of his success is owed to his organizational and leadership abilities, combined with charisma and daring that inspired and encouraged his crews. During his four-year career as a pirate, Black Bart captured and looted over 470 ships.

He was cruel and sadistic and relied on terror and a frightening reputation to win compliance. In 1722, he captured a slave ship at anchor while her captain was ashore, and sent him a message demanding ransom for the return of his ship. When the captain refused, Roberts burned the ship, with 80 slaves shackled aboard. A bloodthirsty man, his end was appropriately bloody: in 1722, he decided to fight it out with a Royal Navy vessel, only to get his throat torn out by grapeshot in the first broadside. His men honored his standing order that he be buried at sea, and immediately weighed him down and threw him overboard before surrendering.