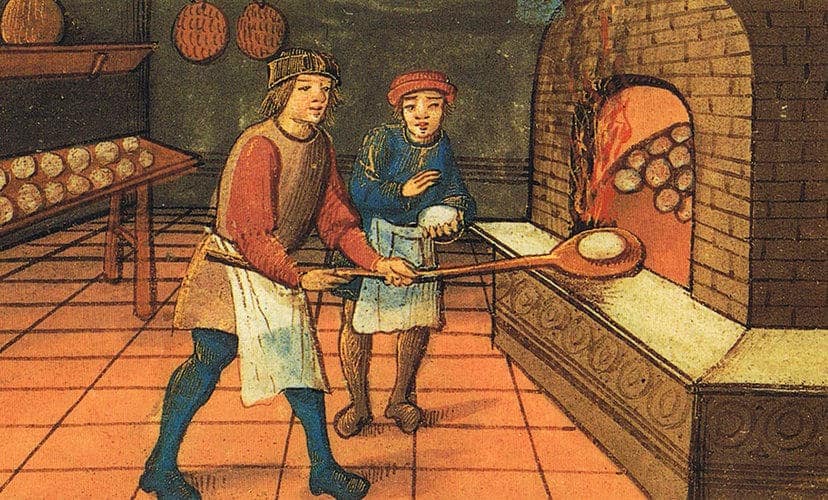 The fashion police were for real

As crazy as it may seem, in Medieval Europe, the simple act of wearing stripes could lead to your imprisonment or even your death. Why? Quite simply, for some reason, striped clothes were seen as the garments of the devil. Thus, anyone caught wearing them would, at best, get an evil eye from people in the street or, at worst, get a hangman’s noose around their neck. Indeed, there are countless examples of people being persecuted simply for choosing to wear the wrong thing. The fashion police were very real and they were very harsh and extremely unforgiving.

Quite when and where this extreme prejudice against stripes started, nobody can say for certain. However, historians of the period have found ample evidence to show that, far from being a brief and localized phenomenon, it was actually quite commonplace right across Europe for many decades, if not centuries. In the year 1310 in the French town of Rouen, for example, a local cobbler was condemned to death simply because he “had been caught in striped clothes“. Even members of the clergy weren’t exempt – in fact, they were judged even more harshly. So much so that in 1295, Pope Boniface VIII issued a Papal Decree banning religious orders from wearing any type of striped clothing.

From the year 1250 onwards, then, the only people who would be caught wearing striped were the lowest of the low in society. Prostitutes, lepers and cripples would don striped outfits, highlighting their status as outsiders. Similarly, those born out of wedlock would routinely be required to wear striped clothes. And, if you were judged to be a really serious offender, then you hangman would most likely be wearing a striped uniform. Crazily, even animals weren’t exempt. The records show that zebras were called ‘the beasts of the devil’ – even though people in Europe had only ever heard reports of them and not seen one with their own eyes.

With the dawn of the Enlightenment in Europe, the hatred of stripes eased and eventually disappeared. Many looked on the phenomenon with confusion, and understandably so. More recently, however, scholars have sought to explain quite why this was such an issue in the Middle Ages. One theory is that stripes can act as a form of camouflage and so simple fear drove the prejudice. Others think it stemmed from a much-too-literal interpretation of the Old Testament verse forbidding the wearing of garments made from two types of material.

Taxation was far from progressive

If you think tax is complicated today, it’s a cakewalk compared to what it was like in Medieval times. To call it complex is an understatement. Taxes went up and down all the time. Sometimes they were low, other times they were frighteningly high. And it often depended on where you were living, too. Levels of taxation did, of course, vary between the different states of Medieval Europe – so, a peasant in Sweden would pay much more than a peasant in England – but it also varied markedly within countries too. Quite simply, peasants were often relying upon the generosity of their local Lord and hoping that he would fix taxation at a low rate – or best, of all, be extremely slack in collecting what was due to him.

Right across Medieval Europe, there was no income tax, simply because nobody had a regular income. Sure, lords, nobles and aristocrats would have had pretty regular income from their land, but then they were exempt from taxation anyway. Peasants and tradesmen, meanwhile, had irregular income, often going up and down according to the seasons. As a result, they were taxed by the local lords either once or twice a year. Farmers would be made to either pay a portion of what they made for their crops or more commonly in countries like Sweden and Denmark, they would simply be required to hand over a certain number of pigs or cows.

The stressful thing was that the lord could increase – he rarely decreased – how much he demanded without any prior notice. It was up to him to judge how much individual farmers or households owed him and failure to pay this could result in the confiscation of property or even imprisonment. Taxes were most likely to go up in times of war, especially in cities. This was especially common in modern-day Italy, where city-states would regularly raise armies to fight their neighbors, with the citizens footing the bill.

At several points in history, taxes became simply too high for the people to tolerate. In Sweden, the peasants revolted in 1434, burning their land after their lords demanded too much of them. So-called ‘peasant revolts‘ caused by taxation issues, were also relatively commonplace in Medieval England. And sometimes they were successful, forcing the nobility to lower their demands if they wanted to hold onto their power.

There was no peace even after death

So, as we’ve seen, life was pretty grim for the average person in Medieval times. Perhaps it was a blessing that, for most people, life was as short as it was brutal. Anyone over the age of 50 in the Dark Ages was considered to be elderly. But that didn’t mean you got to retire. The over-50s were expected to pay their way and keep working until they simply couldn’t physically do it anymore. After that, they were seen more as a burden than anything else. So, for many, death was the only real chance to escape from the everyday hardships or working the fields and trying to get enough money and food to survive. But even in death, many people didn’t get peace.

According to some research, in Europe during the Middle Ages, a massive 40% of graves were disturbed. Now, this wasn’t like grave-robbing during the Enlightenment. There were no university medical schools paying good money for fresh corpses to study. Rather, most cases of grave disturbances were run-of-the-mill theft. Often, people would be buried with a small selection of their possessions, perhaps a favorite cup or other such trinkets. In tough times, even such objects might be enough to tempt a thief to dig up a grave.

However, this wasn’t always the case. Archaeologists in England have found many examples of Medieval graves being disturbed. More specifically, they have found evidence to suggest that, rather than looking for objects, those responsible bound and gagged the dead bodies. It seems that they were fearful of restless souls, or perhaps even of the undead rising again. Freak weather events – such as the ‘Little Ice Age’ – led people confused and often making outlandish assumptions. For many, things could only get better if the dead were dug up and then tied up. Grim times indeed – small wonder that many people simply chose to bury their relatives in unmarked graves so that they could, at last, enjoy some genuine peace and rest.

Medievalist – Sex in the Middle Ages

History of Yesterday – Putting Impotency to the Test

History Collection – 12 of the Coolest Medieval Women of All Time