10 Crimes of the Nixon Administration 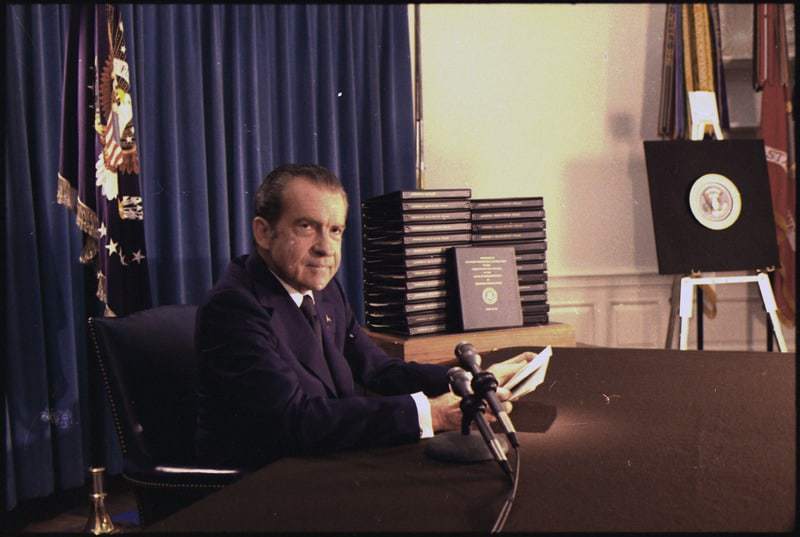 10 Crimes of the Nixon Administration

The Crimes of Richard Nixon

There are those today who continue to defend Richard Nixon, using his foreign affairs expertise as an example of the good he did for the country. They claim that he ended the Vietnam War and opened relations with China as examples of his foreign affairs acumen. Many claims that Nixon didn’t do anything that all President do and that he had no knowledge of Watergate. Many of Nixon’s other crimes are unknown to these defenders, who believe Watergate to have begun and ended with a second-rate burglary which he did not authorize and of which he was unaware before the fact. Nixon’s crimes extended far beyond Watergate, and after he was pardoned by President Ford were largely forgotten.

It was the extent of those crimes, which the Congress was becoming increasingly aware of as the visual media focused on the Watergate hearings which led to Nixon’s downfall. The general public was increasingly concerned only with whether the President directed a cover-up. If Ford had not given Nixon a pardon for all of his crimes the investigation over what is called Watergate would have continued. In fact, several investigations did continue as the full extent of the illegal activities practiced by Richard Nixon and his accomplices continued to come under scrutiny of journalists, investigators, and government activities. With the possibility of a trial eliminated by Ford’s pardon, the public turned its attention to other things.

Before and after Nixon’s resignation, members of the Nixon administration were tried and sent to jail. Forty-eight members of the administration were convicted, some for actions which had nothing to do with the break-in at the Watergate Complex, an event for which they had no prior knowledge nor participation. Charles Colson and Egil Krogh were sentenced to prison for their activities regarding Daniel Ellsberg. Former Attorney General John Mitchell was sentenced to 1 to 4 years imprisonment, he served 19 months. Nixon’s two closest White House aides, H. R. Haldeman (Chief of Staff) and John Ehrlichman (Chief Domestic Adviser) each served 18 months in prison.

One of the remaining questions about the Watergate scandal is why Nixon didn’t destroy the tapes which contained evidence of his own involvement in the cover-up of the burglary. Once the existence of the tapes was made known to the investigating committee the act of destroying them would have been considered tampering with evidence and obstruction of justice, both impeachable offenses. Nixon believed that the principle of executive privilege protected him from surrendering the tapes and once the Supreme Court decided that it did not there was no other action available to him. In 1975 Nixon gave secret testimony to a Grand Jury (transcripts released in 2011) in which he discussed modifying some of the tapes’ content when they were initially released to the public in transcript form, protected from self-incrimination through his pardon.

The Watergate scandal so affected the American psyche that every major political scandal since has been labeled by some with the word gate. Watergate covers a vast number of illegal activities, but it does not begin to cover all of the crimes committed by Richard Nixon and members of his administrations. Whether conservative, moderate, or liberal, all Americans should consider their extent and intent when exploring them further. Nixon’s legacy should not be rehabilitated but studied in detail to prevent other abuses of the public trust and executive power in the highest elected office in the land.

“The Price of Power: Kissinger in the Nixon White House”, by Seymour Hersh, 2013

“All the President’s Men”, by Carl Bernstein and Bob Woodward, 1974