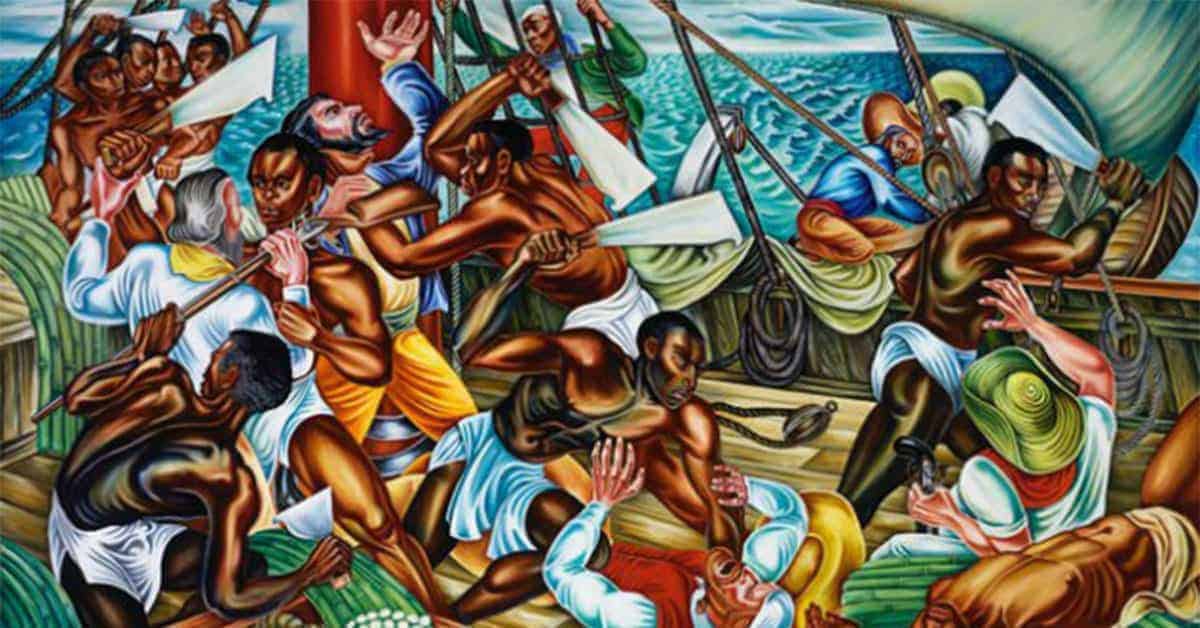 German pioneers settled the German Coast in the early 18th century, located north of New Orleans and east of the Mississippi River. The region was ethnically diverse, had a large free black population, and contained numerous sugar plantations. The area became a part of the United States in 1803 with the Louisiana Purchase, yet most residents were French speakers. The enslaved population far outnumbered the white population. Commodities traveled along waterways, which were prevalent along the German Coast. Despite the use of violence and terror, slaves created intricate networks or communication between plantations. In late 1810, the slave communication network was abuzz with talk of insurrection.

On January 8, 1811, 15 slaves arrived at the Andry plantation located 30 miles upriver of New Orleans. With “the stroke of an axe” they wounded Manuel Andry and killed his son gilbert. The slaves in revolt then traveled to the next-door plantation of Jacques and Georges Deslondes. A field slave, Charles Deslondes, came from that plantation as testimony identified him as a “principal chief” of the revolt. The slaves in revolt marched to a drum going from plantation to plantation along the German Coast harming planters, their families, and homes. After marching from 14 to 22 miles, the slaves reached Cannes-Brulees, a plantation about 15 miles north of New Orleans. Throughout their march, they passed larger and larger sugar plantations and more and more slaves joined in the revolt.

Witnesses estimated that anywhere between 200 and 500 slaves participated in the largest slave revolt in United States history. Planters fled to New Orleans and the other side of the Mississippi River. Residents of New Orleans heard about the insurrection the next morning and began raising a volunteer army to fight against the slaves. A battle took place around 9 am on January 10th where 40 to 45 slaves were killed with the remaining 200 to 500 escaping into the woods. Charles Deslondes, the believed leader of the insurgency, was captured on January 11th. Instead of being tried for his crimes his hands were chopped off, each thigh was shot at until the bone broke, and then he was placed on “a bundle of straw and roasted” before he died.

Parish officials held three tribunals for the slaves captured after the suppression of the insurrection. At one tribunal, 18 slaves were executed by firing squad and their heads placed on pikes. One observer stated that the heads decorated the levee, “all the way up the coast” looking like “crows sitting on long poles.” Support of the insurrection was not universal among the slave community. Some rebellious slaves escaped into the woods and avoided punishment, while others were simply returned to their masters to be punished as their owners saw fit. Most of the known participants were men from 20 to 30 years old and performed the most strenuous labor required on a sugar plantation. The Orleans Territory government granted $300 compensation to owners for any executed slave. Planters along the German Coast accepted a permanent US military presence to ensure their protection from the enslaved majority. No historical markers identify the largest slave revolt in American history.

Women in slavery suffered immeasurable abuses. Prospective buyers a the slave market would examine female slaves by handling their breasts, forcing open their legs for inspection, and even raping them while standing on the selling block. After purchase, female slaves endured a journey riddled with sexual advancements and violence. Upon arrival at the plantation, the female slaves became field hands or house slaves. Those that went to live in the big house endured immeasurable sexual advances from male members of the household while the women of the house treated them disdain and cruelty.

Slavery in all forms was ruled with terror and violence. Sexual assaults against male and female slaves ran rampant and rarely resulted in justice for the slave. Instead, most were forced to submit to acts of sexual harassment and advancement or lose their children that often resulted from such encounters. This placed slave women in a precarious place. They either had to endure unwanted and violent sex acts to remain near their children, or they could flee and lose their children forever. Harriet Ann Jacobs did both.

Born a slave in Edenton, North Carolina in 1813, Harriet Ann Jacobs was a mixed-race girl. Her father was a free European and her mother was a mullato slave. Slave states had a law that proclaimed any child born to a slave would be a slave and legally freeing a slave became increasingly difficult. At six, Harriet’s mother died and she was sent to live with Margaret Horniblow. Under Margaret’s ownership, Harriet was taught to read, write, and sew. When Margaret died, she willed Harriet, now 12, to her five-year-old niece, the daughter of Dr. James Norcom, who became her de facto owner.

Upon her arrival in the Norcom home, the doctor routinely sexually harassed Harriet. When Harriet entered into a relationship with Samuel Sawyer, a white lawyer, Norcom continued his advances. Samuel and Harriet had two children that were also slaves. Norcom threatened her with the sale of her children if she did not submit to his advances. As the years went by, Harriet’s life became unbearable. At 22, Harriet escaped Norcom, finding refuge in another slave owner’s home, where she could keep an eye on her children. After a short stay, Harriet left, traveling through a swamp, to live in her grandmother’s attic.

Samuel Sawyer purchased his own children from Norcom and then went to live with Harriet’s grandmother. Harriet hid in the attic for seven years, her children never knowing she was above them as they grew. In 1842, Harriet went to Philadelphia. She was now a fugitive slave, but instead of hiding, she became involved in the abolition movement. She wrote her narrative, Incidents in the Life of a Slave Girl, using the name Linda Brent, which became an important piece of African American literature, a key publication for the abolition movement, and one of the few narratives that focused on the struggles of female slaves.

Harriet Tubman was born Araminta “Minty” Ross on a plantation on the eastern shore of Maryland. Born between 1800 and 1825, she was one of nine children. Her enslaved father worked as a woodsman and her mother worked in the “big house.” Despite the pleas of her mother, Minty’s older siblings were sold, which impacted the young girl. When Minty was five years old, she was hired out to work as a nursemaid. Her task was to watch over a sleeping baby. When the baby awoke, it cried, and Minty was whipped. As an adult, the scars from her early whippings remained evident.

As Minty aged, she moved from caring for children to working in the fields. Her master often hired her out to work on other plantations. On one such occasion, Minty was running an errand and was hit with a heavy metal weight. Bloody and unconscious, she was carried to a weaving room where she laid for two days without medical care. Forced to return to the fields, her head continued to bleed. The planter returned Minty to her owner proclaiming that she was not worth a penny. The untreated head trauma caused Minty to experience headaches and seizures for the rest of her life.

Around 1844, Minty married a free black John Tubman, after which she changed her name to Harriet Tubman. Edward Brodess, who owned Harriet, attempted to sell her away from her family. When she fell ill in 1849, her value as a slave diminished making a sale impossible. When Brodess died, Harriet Tubman decided that only she would determine her fate. On September 17, 1849, she escaped and became a fugitive slave. With assistance from abolitionists, Quakers, and sympathetic whites, Harriet was shuttled in false-bottom wagons from safe house to safe house. When she arrived in Pennsylvania, she later recalled that she felt like she “was in Heaven.”

Liberty and family was the most important thing to Tubman. Over the next 11 years, she traveled back to Maryland, using deceptive tactics to avoid capture, to assist 70 people to freedom. With the passage of the 1850 Fugitive Slave Law, Tubman and any slaves she was assisting could be captured and sold to new masters or returned to their old masters. This made her work especially difficult, yet she was determined to help as many family members to freedom as she could. In 1859, Tubman purchased land near Auburn, New York, where her newly freed family members lived.

During the American Civil War, she spied for the United States Army, determined to help end slavery for good. In 1869, Tubman married a man 22 years her junior and adopted a baby girl. Money that she earned from working and later her military pension went toward supporting her family. Her biography was published for which she received some income, but friends and strangers sent her monetary support. Late in her life, she joined the women’s rights movement. Harriet Tubman died in 1913.

Catholic News Agency – The Nativity of the Blessed Virgin Mary

The Washington Post – Gabriel’s Revolt: In 1800, He Was Savvy, Armed and Determined to End Slavery in Virginia’s Capital

Smithsonian Magazine – How the Louisiana Purchase Changed the World

SF Gate – Her Tale Was Brutal, Sexual. No One Believed A Slave Woman Could Be So Literate. But Now Harriet Jacobs Has Reclaimed Her Name.

BBC – Harriet Tubman: Former Slave Who Risked All to Save Others