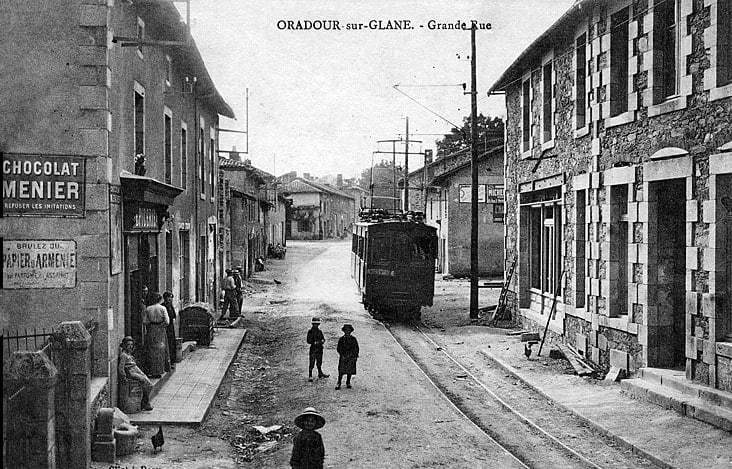 Following the D-Day landing on June 6, 1944, German SS troops unleashed a flurry of grizzly massacres across Europe. The German troops took aim at French civilians, many of whom lived in peasant farm villages with a population of fewer than 1,000. The scenes make up a ghastly collection of extraordinary and sometimes extreme violence.

Gruesome details imply the acts were intended for public display more than pragmatic purposes. On some occasions, the soldiers arrived early in the morning. They would round-up villagers, and then decide whether to execute them or burn them alive, sometimes in the local church.

It was the beginning of the end; the arrival of United States troops in Normandy signaled a German defeat was possible. By that time, German troops were exhausted in every sense of the word. They had been fighting on more than one front for prolonged periods of time. Their resources were running thin. At the other end of the spectrum, an American landing inspired the French resistance movement with a new, and much-needed, wave of hope. Covert resistance members included men and women throughout France, from tiny villages to bustling cities. The collective movement was made up of small resistance cells called, the Maquis — or, wild ones. The term relates to the wild, untamed forests that were used as safe havens by members of the resistance because they were thickly wooded, uninhabited, and lacked roads which made direct access difficult. In the wild forests, cell members would hold meetings and plot against their oppressors.

Many of the Maquis had been fighting since the French government capitulated and signed an armistice in 1940 that handed Germany total authority over France. Four years later, with the arrival of American soldiers, the Maquis upped their game. They aggressively moved against the Germans, who were by this point feeling uncertain. Germany had exhausted its manpower. It had troops scattered far and wide. Was it a boxing match, the Americans were putting in a new fighter in the ninth round? The Maquis and other groups of resistance throughout Europe did not hesitate to take advantage of what they hoped would be the last days of German domination. One of the first places the French resistance surged against the Nazis was in the Nouvelle-Aquitaine region in central France and in the picturesque town of Tulle in the south of France.

Soon after D- Day, on June 9, 1944, a determined Maquis group in Tulle plotted an attack and killed 40 Nazi soldiers. This set off an explosion of violence. Not 24 hours passed before Nazi SS troops arrived in Tulle. They brought in tanks that thundered and shook the earth and stationed them up and down the streets. The SS broke into small units. They ransacked homes and businesses demanding identity papers, proclaiming the exercise was nothing more than a routine identity check. It wasn’t. They were of course hunting for Maquis, and in doing so wanted to know the location of every male in Tulle.

They rounded up every male in the city between the ages of 16 and 60 and detained them. Of the 5,000, the SS negotiated with Tulle’s government over who would and would not be released. It was psychological terror. The SS made it clear, as punishment for the Maquis’ actions, 120 of the men would be executed. They even hung posters around Tulle outlining this as their intent. As the trading and bartering continued, friends saw themselves pawned. One would be released, and the other would take his place. More than half of the 5,000 were eventually released. From those who remained detained, the soldiers haphazardly picked out 99 who were executed by hanging. The rest were shipped to detention centers. Some ended up in Dachau concentration camp.

On June 10, a day after the Tulle massacre, another one rapidly unfolded. The 2nd Panzer division had participated in the Tulle massacre wasted no time before heading north to Oradour-sur-Glane, a French village that is now a permanent memorial as a result of events that took place. When the SS arrived, they set up blockades, not allowing anyone in or out of the village. If a person happened to be passing through, it was unlucky for them. The Panzer division claimed their purpose for stopping by the village was linked to a story they heard about one of their troops being held captive there.

Like in Tulle, the SS kept the villagers calm by proclaiming they were there to conduct identity checks. Fewer than 1,000 people lived in Oradour-sur-Glane. And, so it was with ease that the Nazi troops gathered 642 residents together in the village center. It did not take long for the scene to dissolve into a disaster.

The church door was opened. Women and children were escorted in and the doors were locked. Meanwhile, the village’s men were forced into nearby barns and sheds normally reserved for farming. As there was no audience to watch, there was no point in taking time to set up a mass hanging. The SS instead used machine guns to rapidly unleash a succession of driving bullets. They purposely targeted the men’s legs. Unable to flee from the bullet wounds, the SS doused the nearly two hundred victims with fuel and lit them and the barns on fire.

When there was no way to further torture the men, the SS fixed their sights on the church. They lit it on fire. Then, with an explosive device, they blew an opening in one of the walls anticipating those trapped inside would collectively rush towards it in an attempt to escape. When the 247 women and 205 children desperately did just that, the SS gunned them down with machine guns. The massacre took two hours. The village was destroyed and nearly all its residents were dead. The kidnapped SS soldier was not found. It was established later that he had been killed in combat some days before the attack on the village.

On August 12, 1944, the tiny hillside Tuscan village of Sant’Anna di Stazzema, Italy was attacked. An SS battalion and three SS regiments arrived early in the morning, woke the village residents and murdered 530 of them, almost the whole village. The provocation is thought to be linked to someone in the village collaborating against the German occupation.

It is not clear that this was confirmed, or that it was looked into by the SS as they did not waste time during their brief stay in the village. This, of course, makes it difficult to believe and does not explain the motive for the grim attack.

When the SS set out to the unassuming village that day, the soldiers immediately proceeded to round up villagers. It was slightly different from the incident in Oradour-sur-Glane. The men and women were not segregated and it played out in a less premeditated fashion. In this way, it was more like a random slaughter. The SS grouped as many individuals together as possible until they were cornered, at which point, machine guns were used to shoot the group. Alternatively, the SS relied on hand grenades to end the chaos in one fell boom.

The village priest, Fiore Menguzzo was shot at point-blank range. By the end, victims included at least 107 children and 8 pregnant women, one of whom was found with her stomach slashed. When the last villagers were killed, the livestock was also slaughtered. From under the smoke plumes rising from the pillaged village, the SS officers relaxed and had lunch before leaving.

It is said to be one the largest of the Nazi massacres during World War II. It took place in a mountainous village outside Bologna, Italy. Nearly 1,000 of those living in the rural farming area around the village of Marzabotto were murdered by Nazi troops. Historians have been unable to accurately calculate the number, and some have speculated it might have been as high as 2,000.

What is for certain is that the horrid massacre was widespread. It spanned across several small hamlets outside Marzabotto, including the villages of Grizzana Morandi and Monzuno, and the area of the massif of Monte Sole. The remarkable exercise that left so many civilians dead was in retaliation for supporting a resistance military group, The Partisans, meaning ‘war party.’ The war party in this case was against any foreign entity casting uninvited authority their way. They fought both German and Fascist rule.

A remarkable local priest and member of the resistance risked his life to help those he could to escape. He saved the lives of many of his parishioners. One day, he was diligently undergoing the arduous yet necessary task of burying the bodies of those who did not survive the massacre.

This was forbidden. The Nazis wanted evidence of their venom to linger over the land. An SS officer passing by saw what the priest was doing. The two squabbled over the incident. The officer shot and killed the priest.