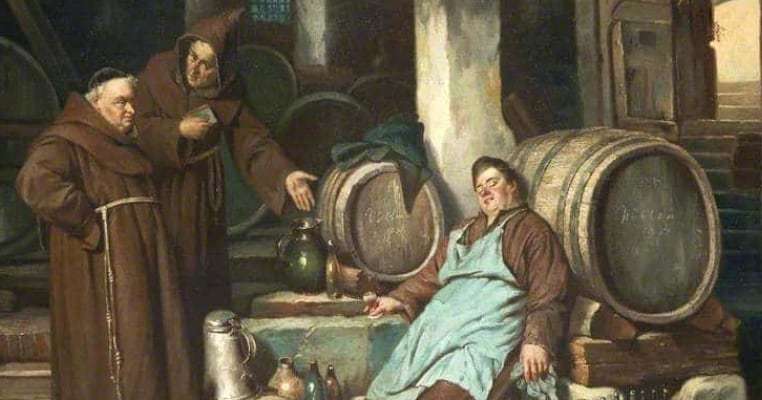 Monks and friars played an important role in medieval culture. Whilst friars were the most visible in living in cities and actively involving themselves in the spiritual and physical wellbeing of normal people, most monasteries were landlords from whom people leased their lands. Their large and secretive communities and mode of dress also made monks and friars visually distinctive from others. As such, they played an important role in medieval life. Their strict vows, however, made them appear sanctimonious, and monks and friars were often the butt of jokes when they did not meet the standards they professed.

Monks, for example, were often accused of being gourmands. They brewed their own beer and made their own food, in which they were rumoured to overindulge. Chaucer’s description of his monk (above) in the General Prologue of The Canterbury Tales embodies this tradition by calling The Monk ‘a lord ful fat and in good poynt’. Another common accusation of monks was that they were obsessed with hunting, with many monasteries owning hunting grounds or enjoying privileges over adjoining lands. Thus Chaucer’s Monk: ‘of prikyng and of huntyng for the hare/ was al his lust, for no cost wolde he spare.’

Though friars were supposed to wander towns begging and in search of the needy, they were often accused of hobnobbing only with the wealthy, from whom they could extract more money or better food as alms. Chaucer’s Friar, for example, ‘ful wel biloved and famulier was he/with frankeleyns over al in his contree/and eek with worthy wommen of the toun’. Some friars were ordained, and thus able to hear confession and to prescribe penance, which often took the form of a generous gift to the friar: ‘in stede of wepynge and preyeres/men moote yeve silver to the povre freres’.

Wandering unfettered amongst lay people, some friars were accused of using the protection of their orders to indulge in sinful or criminal practices, chiefly sexual in nature. In The Wife of Bath’s Tale, Chaucer gives a sardonic description of this. ‘Wommen may go saufly up and doun/in every bussh or under every tree/ther is noon oother incubus but he [a mendicant friar]/and he ne wol doon hem but dishonour.’ Certainly, their unusual level of access to women they were not married to gave friars the opportunity to conduct affairs, or at least enough opportunity to be suspected by others!

Burton, Janet E. Medieval Monasticism: Monasticism in the Medieval West from its Origins to the Coming of the Friars. 1996.

Burton-Christie, Douglas. The Word in The Desert: Scripture and the Quest for Holiness in Early Christian Monasticism. 1993.

Dunn, Marilyn. The Emergence of Monasticism: From the Desert Fathers to the Early Middle Ages. Oxford: Blackwell, 2003.

Knowles, Dom. David. The Monastic Order in England: A History of its Development from the Times of St. Dunstan to the Fourth Lateran Council, 943-1216. Cambridge: Cambridge University Press, 1940.