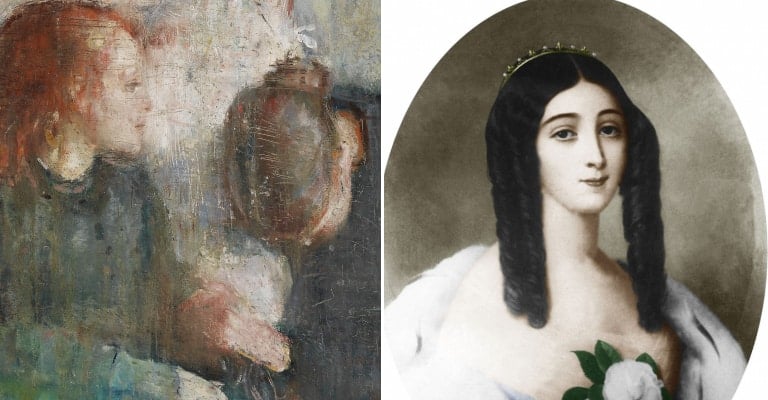 At the start of the Victorian era, the neo-classical style of dress was the main trend among upper-class women. Such clothing included thin, sheer fabrics and tight straight lines that hid the feminine figure. The chest and neck were typically revealed to highlight pale skin and prominent collar bones. Long trains trailed behind dresses to elongate thins silhouettes. The tightness of the corset required for such dresses often caused a stooped figure and left women quite weakened by the lack of ability to breathe deeply.

Interestingly, as breakthroughs in identifying the cause of tuberculosis came to light, the fashions tied to consumptive chic began to change. The long, flowing trains of neo-classical dresses were shortened to avoid dragging through mud and waste in the street, which was thought to help prevent the spread of disease. The incredibly tight tubular shapes of dresses were slightly relaxed to give a curvier, healthier-looking silhouette and allow for more vigorous movement. The thin, wispy fabrics once popular for both the living and dying were replaced by sturdier, warmer structures that were thought to be more conducive to health.

Perhaps unsurprisingly, as tuberculosis fell out of fashion, quite literally, it became associated with the lower and poorer classes. What was once a tragically beautiful disease of the wealthy and the brilliant become associated with squalor and poverty? Healthy and vigorous appearances now became a symbol of wealth. Much of the sympathy towards the afflicted was lost as the disease changed classes.

While the idea of the disease being fashionable may seem outlandish at first, and a relic of the past, much more recent examples of disease chic are easy to find. One needs to look no further than the infamous heroic chic Calvin Klein ads of the 1990s. At the time, the ads were hugely controversial for glorifying drug abuse by featuring the skeletal thin and heroin-addicted model Kate Moss. The ads became a cultural phenomenon with television shows like Seinfeld making jokes about the trend.

An even more recent example is the trend of “pro-ana” or pro-anorexia. There are online communities dedicated to glorifying the appearance of sufferers of anorexia and posting “thinspiration” photos of emaciated women. While neither modern examples are contagious diseases, like tuberculosis, they are still cases of our society glorifying the physical ravages of disease on the female body.