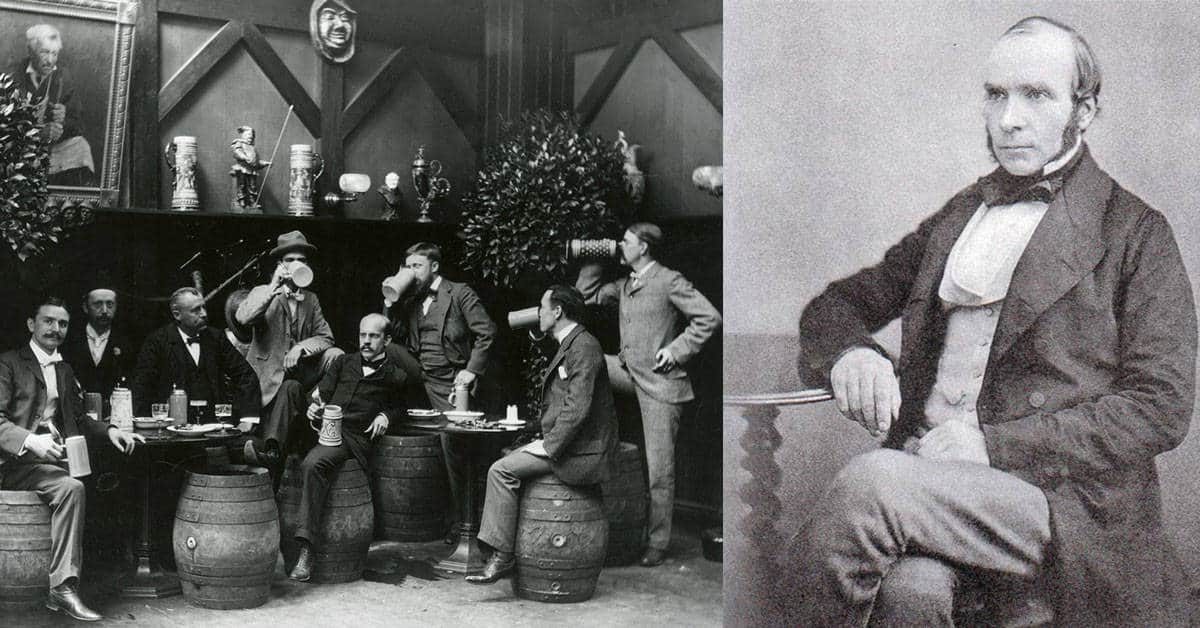 I’m sure a lot of readers enjoy relaxing on the sofa with a cold one while watching the game on a Sunday; but did you know that beer once helped a physician in a life-saving discovery? During a severe cholera outbreak in London, better known as the Board Street Cholera Outbreak of 1854, Snow was able to prove his hypothesis that contaminated water was the cause, not air.

What’s fascinating is that Snow was able to point to the example of the 535 people who worked in a brewery on Poland Street. While cholera was rampant all around the brewery, only five workers had it, and beer was the surprising link.

By the early 19th century, London was one of the largest cities in the world in terms of population. Unfortunately, this growth was marked by a major problem with filth because of a lack of decent sanitary services. For instance, Soho still didn’t benefit from the London sewer by the middle of the century.

Countless people still didn’t have running water or toilets in their homes. As a result, they were forced to use communal pumps and town wells to get their supply of water which was used for cooking, drinking, and washing. The septic systems were very primitive, and most homes and businesses simply dumped animal waste and sewage into open pits known as cesspools or even directly into the River Thames. To make matters worse, water companies would bottle water from the Thames and sell it to breweries, pubs and other businesses.

It was a recipe for disaster, and sure enough, London was gripped with a series of cholera outbreaks. The first wave of the disease occurred in 1831 and killed thousands of people. Another outbreak occurred in 1849 and between the two events, more than 14,000 people died.

John Snow was born in 1813 in the desperately poor region of York. He apprenticed as a surgeon, but in 1850, he moved to London where he worked as a physician. At the time, there were competing theories as to the reasons behind the cholera epidemic. The prevailing theory was known as the ‘miasma’ theory which said that the diseases were effectively spread by ‘bad air.’ The suggestion was that particles from decomposed matter became part of the air and caused the disease to spread.

Snow was a proponent of the ‘Germ’ theory which suggested that the main cause of the disease was an unidentified germ cell. Snow believed that this germ was transmitted from person to person through the consumption of water. As intelligent as this hypothesis sounds, few medical practitioners paid any attention to it. Indeed, one of London’s leading pathologists, John Simon, labeled the Germ Theory as ‘peculiar.’

However, it didn’t take long for Snow to get the opportunity to prove his theory. On August 31, 1854, another cholera outbreak occurred, this time in Soho. A total of 616 people died, and Snow was able to get to the root of the problem.

By September 3, 127 people had died, and many of the residents panicked and fled the city. By September 7, almost 500 people were dead, and three-quarters of Soho’s residents had left. Snow lived close to Soho and began his investigation. He started by examining the neighborhood and spoke to as many of the remaining residents as he could. His goal was to find some kind of link and believed that water contamination was the key, but he couldn’t find the proof he needed.

He checked the water and was unable to find organic matter on it; a finding that seemed to discount the Miasma Theory. After interviewing the families of victims, Snow discovered that almost every one of them lived close to the water pump on Broad Street. On the Soho streets that were closer to another water pump, the number of fatalities was significantly lower. In fact, only 10 cases occurred in people that lived near another pump. In five of those cases, the victim used the Broad Street Pump and three others were kids who went to school near the pump.

The Map That Changed the World

By now, Snow was convinced that the Broad Street Pump was the cause of the epidemic and he created a map to prove it. On his map, Snow drew the area of Soho, and each death was represented by a bar. Upon the completion of his map, it was clear that the vast majority of cases were centered around the pump on Broad Street.

But that wasn’t all; as well as tracking those that lived near the pump, Snow tracked hundreds of cases of the disease to schools, pubs, businesses, and restaurants in the area. Snow kept meticulous records of his findings which are fascinating. For example, he spoke to someone who worked in a coffee shop and served customers glasses of water taken from the pump on Broad Street along with meals. She knew of nine customers who had cholera.

There was a bubbly drink called ‘sherbet’ which was extremely popular at the time. Snow found out that the powder was sometimes mixed with water from the pump and he believed it was the source of dozens of cases.

Even in instances where Snow was originally perplexed, he was ultimately able to find the answer. For example, he was puzzled by the deaths of two women who lived a long way from Soho. He finally made the connection after speaking to the son of one of the deceased. As it transpired, she used to live on Broad Street and liked the taste of water so much that she had it bottled and sent to her.

As important as it was to find out more about the victims, Snow also needed information about people who had escaped illness. He found the answer in the unlikeliest of places.

When Beer is the Answer

One of his most fascinating discoveries was the relative good health of the 535 people who worked in a brewery on Poland Street. Only five of them contracted cholera; probably because they drank water from the Broad Street Pump. According to the foreman, workers were allowed to drink as much of the malt liquor they made as they liked.

It came from water in the brewery’s pump. If they drank water, it would have been from the brewery pump, but according to the foreman, most of the workers didn’t drink water; why would you when you have beer? Snow found that a workhouse on Poland Street was also unaffected. Once again, it has its own water supply. Upon examining the water coming from the pump, Snow found white flecks floating in it which he asserted was the cause of the illness.

Turning the Tide of the Epidemic

By now, Snow had a huge amount of evidence to support his theory that the Broad Street pump was the culprit. He approached the local council and told them to take the handles off the pump to prevent anyone else getting the disease. Although the officials were reluctant to do so as they didn’t believe in Snow’s theory, they acquiesced on a trial basis beginning on September 7. Sure enough, the number of cholera cases dwindled and almost came to a halt within a few months. Residents who had fled Soho slowly returned as the situation improved.

Even though Snow’s plan had the desired effect, his hypothesis was still ridiculed as nonsense. The Board of Health refused to do anything to clean up the cesspools and sewers, and claimed that Snow’s evidence was nothing more than ‘suggestions.’ For his part, Snow continued to track every cholera case for months afterward and found that almost all of them came from the pump at Broad Street. What he couldn’t do was find the source of the contamination. The answer arrived almost by accident.

Reverend Henry Whitehead wanted to prove that Snow was wrong and the outbreak was an act of God. Instead, he helped prove Snow’s theory by finding the source of the outbreak. Upon interviewing a woman at 40 Broad Street, Whitehead learned that her child had contracted cholera from a different source. She washed the baby’s dirty diapers in water which was dumped in a cesspool just a few feet from the Broad Street water pump.

In 1855, a magazine called The Builder published Whitehead’s report and called on officials in London to clean up the cesspools and sewers in the city. However, no action was taken for many years. In 1883, a German physician named Robert Koch isolated a bacterium called Vibrio cholerae and determined that cholera wasn’t contagious. Instead, it was transmitted through unsanitary water and food supplies only. It was a victory for Snow in many ways, and once cities in the United States and Europe cleaned up their water supply sanitation, cholera epidemics became a thing of the past.

As for Snow, he died in 1858, long before his work was given due credit. Today, Snow is considered by many to be the world’s first epidemiologist.

DW – Robert Koch: The Man and The Microbes

ThoughtCo – How A Map Stops Cholera

The Guardian – John Snow’s Data Journalism: The Cholera Map That Changed the World

The Vintage News – The 1854 Cholera Outbreak of Broad Street. Everyone Got Sick Except For Those Who Drank Beer Instead of Water