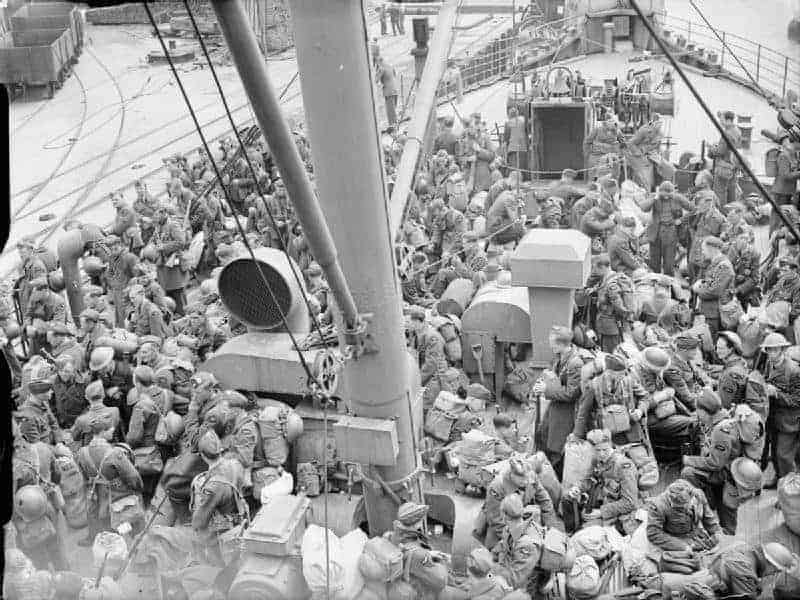 On this day, on June 17th 1940, British troops left France, on a scale similar the operation at Dunkirk. The evacuation of Dunkirk is very well known. Operation Dynamo, as the evacuation is known, has been something of a legend. However, in 1940, Operation Ariel was an evacuation that was of a similar size to Operation Dynamo.

In May 1940, the German army launched an offensive against the Allies. They adopted blitzkrieg tactics. The Germans thrust into France via Belgium. They caught the allies unaware, by coming through the hilly and forested Ardennes region of Belgium and this allowed them to outflank the French and British defensive forces.

The Germans swept into northern France and using their superior armor with air support drove back the French and the British. Soon Paris had fallen to the Germans. The British and the remaining French troops were cornered into north-western France. It was clear that they had to be evacuated or else they would be forced to surrender. By June 14, some two-thirds of France was occupied by the Germans. Many of the British forces were evacuated from Dunkirk.

A large, British forces were too far from Dunkirk and could not move because of German attacks, especially attacks from the dreaded Stuka dive-bombers. They had to be evacuated from further down the coast. A large number of British, Poles and Canadian troops were rescued from France from the French ports of St Malo, Cherbourg, and Brest. The evacuation of British forces at these ports was relatively peacefully and there were no significant air attacks on the naval forces rescuing the British, Polish and Canadian units.

The British intended its navy and civilian ships to repeat the evacuation of Dunkirk. The men embarked on the ships and headed to Britain with little or no incident. However, there was some risk. A French ocean liner had taken some 5000 French soldiers and civilians on board and intended to bring them to England. It was sunk by Stuka dive bombers and this led to the loss of 3000 lives.

Churchill decided not to release information about the sinking of the Lancastria. He believed that news of the death toll would be bad for British morale as a time when many in the country were still reeling from the Fall of Paris.

Churchill presented the evacuation of Dunkirk and Operation Ariel as great successes. They had managed to save the British army and many believed that he would allow the British to continue the war against Germany. Many believed that they would be needed to beat back any attempted German invasion. Churchill emphasised the success of Operations Dynamo and Ariel, to distract the public’s attention from the failures during the French campaign. Tens of thousands of troops eventually were rescued during Operation Ariel.

However, Germany was too preoccupied with the occupation of France to consider the invasion of Britain, at that time.