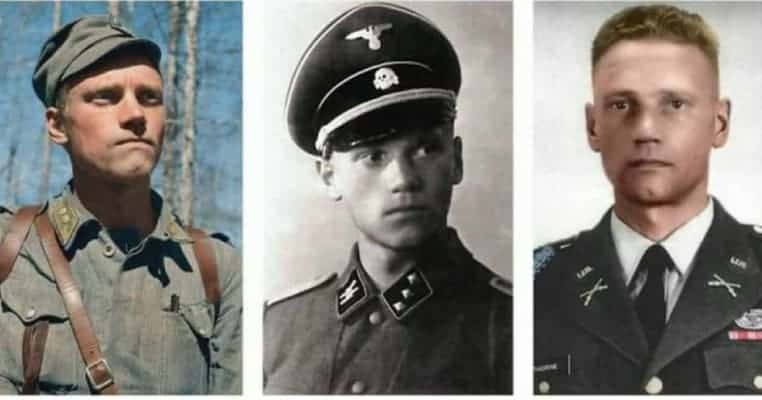 To say that Larry Thorne did not like communists would be an understatement. The man led an extraordinary life that first saw him fight against the Red Army in the ranks of his native Finland’s army. After a brief hiatus, he again fought the Soviets during World War II in German uniform, as a Waffen SS officer. When Thorne’s remarkable military career finally came to an end, he was in US Army uniform, having reinvented himself as a Green Beret.

En route, Thorne had become a legend and war hero in three different countries. He is celebrated in Finland as a recipient of the Mannerheim Cross – that country’s highest award for valor, equivalent to America’s Medal of Honor. In German uniform, he earned an Iron Cross. In American uniform, he earned a Bronze Star for valor and two Purple Hearts, and became special forces legend. Nowadays, the US Army Special Forces bestow the Larry Thorne Award every year to the toughest Green Beret detachment.

The Making of a Warrior

He was born Lauri Allan Torni in Finland, in 1919. A natural athlete, he got into skiing and other sports at an early age, and one of his childhood friends, Sten Suvio, grew up to win a welterweight boxing gold medal at the 1936 Berlin Olympics. In his teens, Torni joined the Civil Guard – a Finnish militia that is a cross between America’s National Guard and Army Reserves. He also attended business school. In 1938, Torni joined the Finnish military, and was assigned to an infantry battalion.

A year later, the USSR demanded that Finland cede some strategically important territory. When the Finns refused, the Soviets attacked, kicking off the 1939-1940 Winter War. The invaders were expected to steamroll over tiny Finland, whose population at the time numbered a mere three million. The Finns, however, put up a fierce resistance that humiliated the Red Army. Against the odds, the Finns actually went on the counterattack at some point, and managed to encircle and wipe out a number of Soviet divisions.

Torni’s performance caught the attention of his superiors, and in the war’s later stages, he was sent for officer training, then commissioned as a second lieutenant. By then, however, the Soviets had managed to get their act together. Once the Red Army was able to bring its overwhelming superiority in arms, men, munitions, and materiel to bear, the writing was on the wall. By the spring of 1940, the Finns had inflicted about 380,000 casualties upon the invaders, while suffering only 70,000 of their own. However, unlike the Finns, the Soviets could afford their losses.

Finland was forced to throw in the towel and sue for peace in March of 1940, and gave the Soviets what they had wanted. Understandably, the experience of having his country invaded by the communist USSR left Torni with a serious dislike for the Soviets and for communism. The conclusion of the Winter War left Torni seething at his country’s unjust treatment and itching for payback, and in June of 1941, he traveled to Vienna to train with the Waffen-SS.

By the time Torni finished his Waffen-SS training, Finland was once again at war with the USSR. When the Germans invaded the Soviet Union, Finland joined Nazis as a co-belligerent in what the Finns termed the Continuation War. After completing his SS training, Torni was made an Untersturmfuhrer – the SS equivalent of a lieutenant. It was during this second round of warfare against the Soviets that Torni became a Finnish war hero, and earned a reputation as a feared raider and irregular warrior.

Fighting With the Nazis

It did not take long after the Continuation War broke out for Lauri Torni to get promoted to captain. He was put in charge of a unit of snow skiers, who literally skied into battle against the Red Army. In 1942, Torni was awarded a German Iron Cross for leading a machine gun unit into a firefight, on skis with guns blazing, while displaying sundry heroics, including the rescue of a wounded officer. Torni was severely injured when he skied over a landmine, but recovered and was soon back in the thick of action.

In 1943, his unit became informally known as “Detachment Torni”, and he turned it into a Finnish legend. In addition to his tactical skills and instinctive feel for the terrain, Torni inspired his men and earned their respect by sharing their hardships. Mauno Koivisto, who later became Finland’s president, was one of his men, and he described his commanding officer thus: “Torni, as a leader, was liked. In many ways, he emphasized that we were all the same bunch, and he bore his share just like the others… He did not ask anyone to do something he did not do himself. He carried his own load, marched at the lead, and was one of us.”

Torni forged the men under his command into an elite reconnaissance and raiding formation, which he led on dangerous missions behind enemy lines. His exploits inspired his own side, while instilling fear into the hearts of the enemy. Indeed, Torni was such an effective guerrilla fighter, and inflicted such damage and casualties upon the Red Army, that the Soviets put up a bounty of 3 million Finnish marks for his capture – the equivalent of about $650,000. He is the only Finnish soldier for whom the Soviets offered a bounty. Needless to say, the bounty went uncollected.

The wider war, however, went against Finland, and in September of 1944, the Finns sued for peace and dropped out of the war. The Finnish army was largely disbanded and Torni was discharged, but he still wanted a go at the Soviets. So in early 1945, he joined a pro-Nazi Finnish resistance movement, and hitched a ride on a U-boat to Germany for clandestine guerrilla and sabotage training. By then, however, the writing was already on the wall for the Nazi regime, which was reeling on its last legs.

Torni’s training ended prematurely in March of 1945, and he found himself stuck in a collapsing Third Reich, without a means of transportation back to Finland. However, by then Germany did have plenty of Soviets to fight, so Torni joined a German unit to fight the advancing Red Army. In the war’s final days, he made it to the Western Allies’ lines, where he surrendered to British troops. Sent to a POW camp, he escaped and made it back to Finland in June of 1945.

Torni had been a national hero when Finland had been formally at war, but his subsequent actions fighting for the Nazis after his country had concluded a peace treaty made him a political liability. Back home in Finland, he was arrested, escaped, then rearrested in 1946 and tried for treason. He was convicted and sentenced to six years in January of 1947. He escaped, was recaptured and returned to lockup, before he was eventually pardoned in late 1948.

Joining the US Military

After his release from prison, Torni got a job on a Swedish cargo ship, and when it sailed near Mobile, Alabama, he jumped overboard and swam to shore. He claimed asylum as a political refugee, and with the help of former OSS chief William Donovan, he got a residency permit. He settled in with the Finnish migrant community in Brooklyn, and got a job as a carpenter and cleaner, before enlisting n the US Army in 1954. He anglicized his name from Lauri Torni to Larry Thorne, and with his experience and track record in irregular warfare, he soon ended up in the Special Forces.

It seemed as if Father Time was unable to catch up with Larry Thorne. Once he made his way into the Green Berets, he earned a reputation in the Special Forces community as one of its fittest and toughest officers. Indeed, his physical fitness was such that he frequently outperformed other men half his age. One commanding officer effused about him in an evaluation, and wrote: “I have not known any officer in his grade to whom he can be compared. He is over forty years old, but has the physical ability of a person of twenty-five.”

He trained NATO forces in West Germany, ran a reconnaissance and sabotage school, and in the late 1950s, earned accolades for his role in a search and rescue mission in Iran’s Zagros Mountains. He deployed to Vietnam in 1963, as an adviser to South Vietnamese forces in the Mekong Delta, and earned a Bronze Star for valor plus two Purple Hearts. He returned to Vietnam for a second tour in 1965, and ended up with the Studies and Observations Group (SOG) – an unconventional special warfare unit. On October 18th, 1965, Captain Larry Thorne was overseeing an operation to identify Viet Cong positions on the Ho Chi Minh Trail, when his helicopter vanished in a mountainous area 25 miles from Da Nang. Rescue and recovery teams were unable to locate the chopper. Soon after his disappearance, he was posthumously promoted to major, and awarded a Distinguished Flying Cross and Legion of Merit.

Thorne was 46 when his helicopter disappeared, and many who knew him had trouble believing that such a seemingly indestructible warrior had actually died. During the ensuing decades, there was considerable speculation about what had actually happened. Some figured that he had survived and walked away, while others suspected that he had been captured and finally turned over to the Soviets, who locked him up somewhere. NVA defectors were shown photos of Thorne, to find out if any recognized him. On the anniversary of his disappearance every year thereafter, Thorne’s comrades would down a toast in his honor, “wherever he may be“.

In 1999, Thorne’s downed helicopter was finally located. His remains were intermingled with those of three South Vietnamese servicemen who had been with him in the chopper. Following a ceremony in Hanoi, attended by Secretary of State Madeline Albright, the remains were repatriated to the US. In 2003, the remains were formally identified as those of Thorne. He was memorialized on the Vietnam Wall, and on June 26th, 2003, Major Larry Allan Thorne, along with the South Vietnamese servicemen who had died with him, were buried in Arlington National Cemetery under a single headstone. He is the only former Waffen-SS member to end up in America’s most hallowed burial grounds.

Badass of the Week – Larry Thorne

Business Insider, July 2nd, 2015 – The Crazy Story of the Man Who Fought For Finland, the Nazis, and US Army Special Forces

Cleverly, Michael J. – Born a Soldier: The Times and Life of Larry A Thorne(2008)