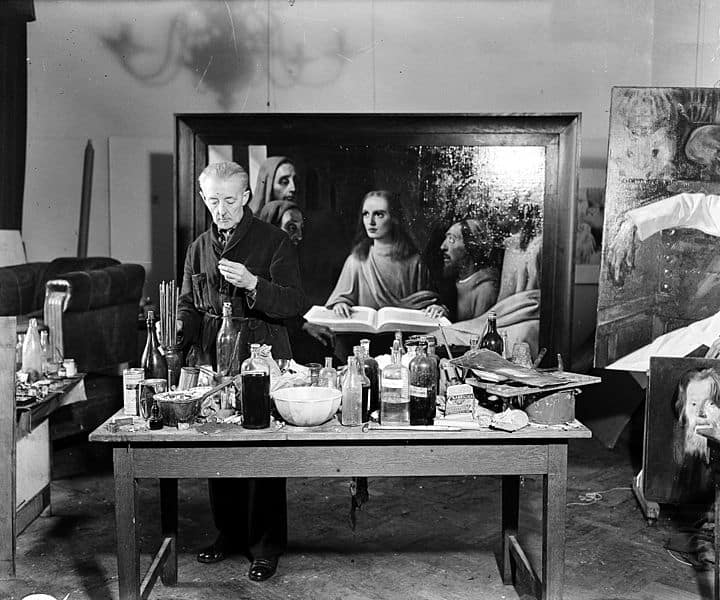 17. Van Meegeren did not have long to revel in his popularity

Other than his period in the custody of the military authorities, Han van Meegeren enjoyed a profligate lifestyle for more than four decades. He drank heavily throughout his life, and also used both morphine and opium. He chain smoked unfiltered cigarettes from rising in the morning until retiring at night. During the war years his lifestyle began to erode his skills with brush and palette, but by then the majority of his forgeries were completed. His painting done before witnesses while in military custody revealed some of his deterioration, though some attributed it to his working before witnesses and under pressure.

Immensely popular, he spent the two weeks allowed for him to prepare his appeal or settle his affairs at home. He had the freedom of the neighborhood, and moved about without hindrance. On November 26, the last day of the time allowed for his freedom, he suffered a massive heart attack. Sent to an Amsterdam hospital, he remained there until December 29, when a second heart attack struck him. He died the following day. Following his death, the Dutch courts ruled his estate should be liquidated and his property auctioned. The money thus raised would be used to compensate the purchasers of his forged paintings, and to pay back taxes on the sale of the forgeries.

18. Most of van Meegeren’s ill-gotten gains remained outside the reach of the courts

Throughout his questioning and court appearances, van Meegeren adamantly insisted that his wife knew nothing of his forgeries, or the money which they brought. He claimed she never entered his studios when he worked, and had little interest in how he made his money. Neither the military investigators nor the Dutch civil authorities challenged his assertions, and no evidence of her involvement appeared. The vast majority of his fortune, including most if not all of the income from his forgeries, transferred to her in their divorce. In the absence of her being charged with collusion in his crimes, her money enjoyed protection from civil action against her ex-husband.

Jesus Among the Doctors sold at the court-ordered auction of van Meegeren’s estate. It brought the equivalent of about $7,000 in today’s value. The entire auction raised only about $500,000 in today’s funds, while his former wife retained most of the money his forgeries and other work had raised. Estimates are that van Meegeren earned, if that is the word, about $50 million during his lifetime, most of it through his forgeries. Despite the revelation that van Meegeren sent an inscribed copy of his book of art to Adolph Hitler, he remained immensely popular among the Dutch for decades. The inscription to Hitler read, “To my beloved Fuhrer in grateful tribute, from H. van Meegeren, Laren, North Holland, 1942”. Van Meegeren claimed he merely signed the book, and someone added the inscription later. Handwriting experts established both are from the same hand.

19. Van Meegeren retained near mythic status among the Dutch for decades

As happens with many artists, van Meegeren’s death ushered in a period when the prices commanded by his paintings rose sharply. Both those signed with his name, and the forgeries he created in the styles of masters increased in value. Van Meegeren created hundreds of paintings which bore his signature during his lifetime, normally a deterrent to higher prices, based on supply and demand. The man whose work once drew the derision of critics became a highly desired source for art collectors. Inevitably, shortly after his death, forgeries bearing his signature began to appear in the international art markets. The forger became a target for other forgers, one of whom was van Meegeren’s own son.

Jacques van Meegeren trained with his father, and possibly assisted him in his work as a forger. Following the death of Han, Jacques created several forgeries in his father’s style. He signed them with his father’s name, rather than attempting to create other works by the old masters. By doing so, he eliminated the requirement to age the paintings. Jacques was far from the only painter to create works in his father’s style, many of which remained unidentified. However, he failed to attain the level of success realized by Han van Meegeren, and died in 1977, leaving behind a small estate. As a result of his work and that of other forgers, an unknown number of fake van Meegeren’s continue to hang in galleries today.

20. Van Meegeren remains a controversial figure in both art and Dutch history

To some Dutch van Meegeren is a national hero for his defiant defrauding of the Nazi occupiers of their homeland during the Second World War. If he did deliberately scam Hermann Goering it certainly placed him at considerable risk. One can imagine the wrath, and the reprisals, had Goering learned of the fraud while still in power. Others argue that van Meegeren defrauded the Dutch courts by creating the myth of his defiance of the Germans. They point out the painter’s manipulation of the legal system to retain the wealth he obtained through his forgeries in sales to collectors of several nationalities. They also point out that many of the properties purchased by van Meegeren came from those fleeing the Germans before the occupation of the Netherlands in World War II.

His paintings, both his forgeries and original works, continued to be displayed in galleries, museums, churches, libraries, and private collections. Van Meegeren may have summed up his life in an interview, in which he described his relationship with his father. According to the painter, his father once told him, “You are a cheat and always will be”. His painting, Jesus Among the Doctors, painted to prove he was a fraud and a cheat, is today displayed in a church. Christ with the Adulteress once hung in Carinhall as the pride of Hermann Goering. Today it is displayed in the Museum de Fundatie, Zwolle, Netherlands. And the search for previously unknown paintings by Johannes Vermeer continues to be a Holy Grail of the world of fine art.

“I was Vermeer: The Rise and Fall of the 20th Century’s Greatest Forger”. Frank Wynne. 2006

“The Man Who Made Vermeers: Unvarnishing the Legend of Master Forger Han van Meegeren”. Jonathan Lopez. 2009

“The Forger’s Spell: A True Story of Vermeer, Nazis, and the Greatest Art Hoax of the Twentieth Century”. Edward Dolnick. 2009