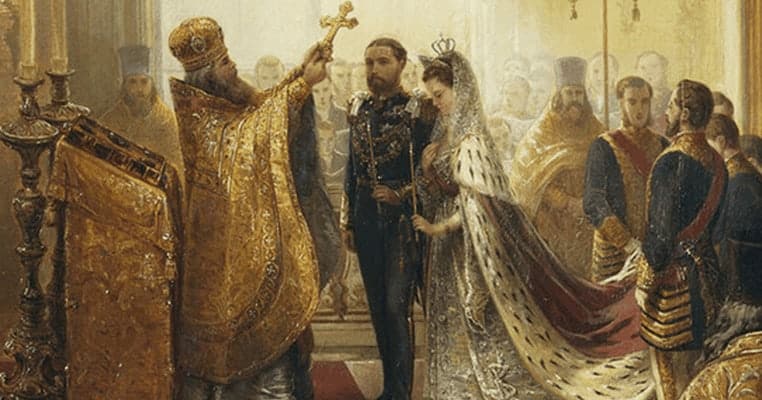 The first time Mary married France’s King Louis XII, whom she had to marry. After King Louis’ demise, Mary started seeing a new man, someone she fell in love with and decided to marry named Charles Brandon. The biggest problem with this relationship is that Mary never asked her brother, King Henry VIII, for permission to marry.

Dowries have had a place in history for centuries. In fact, the ancient Egyptians made sure dowries became a part of marriages. The most significant difference between the 19th century and ancient Egypt dowries is the number of wives someone had at one time.

Ramesses II was a typical Egyptian Pharaoh and had several wives. While no one knows her name, we do know that one of Ramesses II’s wives brought goats, horses, and slaves as her dowry. We also know that part of her dowry was a peace treaty between Egypt and her country.

18. Chinese Billionaire Offered A Handsome Dowry And Then Took It Away

Not all dowries in history have stayed with the married couple. Recently, Chinese billionaire Cecil Chao offered many that would marry his daughter up to $40 million. The catch was his daughter, a lesbian, had to agree to marry the potential suitor and state she was no longer a lesbian.

While Cecil and his daughter received many offers, she refused them all and pleaded with her father to accept her partner, whom she loves very much. Even though it embarrassed him, Cecil agreed and told people the offer was off the table and kept the money.

17. Chinese Magnate Wu Duanbiao Gave Away His Daughter And $150 Million

Wu Duanbiao is one of the richest men in China, and he had no problem showing off his wealth when it comes to the marriage of his daughter, Xu. Along with a wedding that totaled eight days, he also gave his daughter and her new husband a large number of gifts throughout this time.

While Wu Duanbiao barely made any income the year before his daughter’s wedding, he couldn’t help but reach into his savings to make sure she is taken care of. This meant that he gave his daughter a gift of $150 million to receive as her dowry.

The friends of the groom told him it’s like he robbed a bank, but came out with more than what a bank would have for him. Not only did Wu Duanbiao make sure that his daughter had a wedding that lasted over a week and sent her off with $150 million, but he also gave her two vehicles.

Wu Duanbiao’s daughter received the gifts of a Porsche and a Mercedes. Along with the cars, the couple received four boxes of gold. Still, Wu didn’t stop there. He also decided to give $1.5 million to two different charities in celebration.

15. Catherine Of Aragon Brought A Large Dowry To Her First Marriage

Catherine of Aragon is best known as the Queen of England and King Henry VIII’s first wife. However, before she married King Henry, she married his brother, Arthur Tudor, Prince of Wales. The couple married in a lavish wedding in 1501.

One of the most luxurious weddings wasn’t the only part of Catherine’s dowry. Catherine came from a wealthy family who wanted to make sure she always lived a lavish lifestyle. Along with several pieces of jewelry, Catherine brought with her 200,000 escudos. At the time, this was more than the English government made in one year.

14. Catherine’s Dowry Lasted Through Her Second Marriage As Well

Unfortunately, Catherine’s first marriage to the Prince of Wales didn’t last long. The prince died the following year. The problem with Catherine’s dowry is that the king only saw half of it by the time his brother died. Because the prince passed, England might never see the rest of Catherine’s dowry.

This is when King Henry VIII stepped in and did something that kings weren’t supposed to do during this time. He decided to make Catherine his first wife, ensuring that he continued to see her lavish dowry. While we can’t be sure how much money this is today, it’s enough to live very well.

It always seems to surprise people what traditional dowries included. For Catherine of Braganza, one of the surprising requirements of her dowry included trading rights. When the Portuguese Princess Catherine married King Charles II of England and Scotland, she allowed England to trade with Portuguese colonies all over the world.

This trading allowed England to receive items that they rarely had before and helped raise the economy of the country. Some of the things Catherine introduced to England included oranges and forks.

Incredibly, Catherine of Braganza is known as the “forgotten queen” because she gave so much when she married King Charles II of England and Scotland. Not only did she provide trading rights and introduce various new items to the country, but she also brought with her over $500,000 worth of trading goods.

Another part of Catherine’s dowry included some major ports, such as Tangier, Mumbai, and Morocco. Unfortunately, Catherine did not have any children, but this doesn’t mean that England didn’t prosper with her help.

11. Cicero Married His First Wife For Her Lavish Dowry

Marcus Tullius Cicero is known for many things, such as being an ancient Roman politician and lawyer. He is also known for having more than one wife during his lifetime, and while this is not unusual, the reason why he married his first wife is well, not as odd as well.

Cicero became the first person in his family to enter the Senate, and this meant he had a lot of social obstacles to overcome. This became challenging, especially when his funds ran low. Therefore, he found a woman to marry him that brought with her a farm, mountain estate, and landlords of Roman apartment blocks.

10. Also, Cicero Married His Second Wife For Her Lavish Dowry

Cicero leaped into politics when he married his first rich wife, Terentia. However, she refused to simply hand over everything he wanted and continued to manage his finances. When this didn’t become enough for his status, Cicero divorced Terentia and married a much younger woman named Publilia.

Publilia couldn’t manage Cicero’s finances because he was her guardian. Their marriage would end in a divorce as well. Cicero got what he needed from Publilia and then sent her on her way. From that point on, Cicero lived a pretty good lifestyle.

9. The Father Promised The Gift Of Cleanliness

Most dowries came in the form of money, gold, or land, but there are also many unique dowries. One dowry comes from a well-to-do hairdresser from the early 20th century. Happy with his daughter’s choice for a husband, he wanted to take care of the couple for as long as possible, but not just financially.

While he sent his daughter with a lump sum of money, he also wanted to make sure the couple remained clean for the rest of their lives. Therefore, he weighed his daughter and gave her 140 pounds of soap.

Robert Miller, Marie-Chantal’s father, is a luxurious good billionaire. Therefore, Marie came into this world rich, but this still didn’t stop her from becoming richer when she married Prince Pavlos, the Crown Prince of Greece.

While Marie wasn’t a royal, the royal family didn’t mind because she is a member of the world’s highest society. Because of this, Marie-Chantel received a $2 million dowry on her wedding day. On top of this, her family also hosted a pre-wedding reception that fed over 1,300 guests. But that’s not all. The bride’s wedding dress cost more than $200,000.

7. Marie-Chantel Wasn’t The Only Member Of Her Family To Receive Such A High Dowry.

Princess Marie-Chantel is one of three women to have married from her family. For all three of his daughters, Robert Miller only gave the best. Not only did Marie receive a $200 million dowry from her father, but her two sisters, Alexandra and Pia, did as well.

Alexandra married a German Prince and received the same treatment as her sister, Marie-Chantel. Pai, who married a Getty heir, also had an expensive and large wedding along with receiving a $2 million dowry.