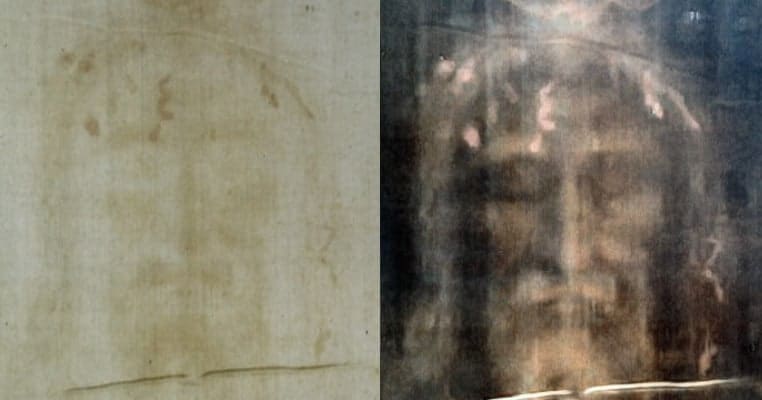 8. The Bloodstains Are Human Blood

Many skeptics regarding the Shroud of Turin’s authenticity have long claimed that the image seen on the linen cloth is nothing more than a figure that an artist painted. In 1978, scholar John Jackson got permission from the Cathedral of Saint John the Baptist to carry out tests to determine what kind of paint may have been used. What he found when he tested pieces of the cloth is that no binding or mixing agents were used in the color, meaning that it did not correspond with the known painting practices of the fourteenth century. In fact, what was used to create the image on the shroud wasn’t paint at all. It was blood.

Jackson’s truly astounding find, though, was that it was human blood on the shroud. The blood type has been identified as type AB. Furthermore, there are two distinctive types of blood found on the cover: pre-mortem blood, the kind before a person dies, and post-mortem, which has undergone changes following death. If the Shroud of Turin indeed is a Medieval forgery, as the carbon-14 tests show, it is genuinely the most elaborate forgery of the entire Middle Ages, perhaps in world history. However, Jackson’s findings indicate that there may have been errors in the 1988 tests.

7. Perhaps the Shroud Was Made by a Medieval Embalmer

Embalmers have long had expertise in understanding death and how the human body changes in distinct phases following death. One theory postulates that if a painter did not create the image on the shroud, then it must have been formed by an embalmer in the fourteenth century. Perhaps someone with a particularly macabre bent would have taken a recently dead body and subjected it to the wounds of crucifixion, then laid the piece of linen over the body to create the image. He then might have figured that he could become rich by selling it to the wealthy de Charny family, convincing its master that he would be in possession of the funeral shroud of Jesus Christ.

The problem with this theory is that there are precise details on the shroud that cannot be explained by this theory. For example, there are some anatomical parts, such as the eye sockets and hair details, that would not have come into direct contact with the shroud. Had an embalmer pressed the cover down to force these different details to come into contact with the shroud, the image would have been distorted. The embalmer theory, while seemingly plausible at face value, is not capable of explaining the remarkable forgery behind the Shroud of Turin.

6. The Image Reveals a 3-D Structure

A painter could not have made the shroud, nor could it have been done by an embalmer. Perhaps it was created by a sculptor. After all, the image on the cover is three-dimensional; there are variations in the picture that corresponds to how different parts of the body stand concerning each other. A sculptor, rather than a painter, would theoretically have known three-dimensional figures to create the image seen on the shroud.

To test the sculptor theory, John Jackson created a human sculpture, laid it face-down, and heated it so that its image would be imprinted on the linen cloth that he put over it. What he found was that at the temperature necessary to stamp an image on the fabric, the forger would have had to remove it within 1/10 of a second after laying it down. It is highly, highly unlikely that an unscrupulous conman from the 1300s would have that kind of precision. Furthermore, what cannot be explained by the sculptor theory is that a scorched material or paint did not create the image. It was made by blood, and the blood’s precise pattern on the linen’s weave could not correspond to what would have feasibly been created by a sculptor.

5. There Was Another Shroud in Constantinople

Constantinople, the capital of the Byzantine Empire and seat of the Orthodox Church, also had a shroud that the people believed was the real burial shroud of Jesus. This shroud was documented in the year 1196, but evidence suggests that it had been in the possession of the Byzantine Church long before then. It is recorded both visually and textually in a document known as the Pray Codex or the Pray Manuscript. If the shroud that surfaced in Constantinople and the Shroud of Turin are actually both the same shroud, then the carbon-14 tests are incorrect. The Shroud of Turin would date to at least 1196, if not earlier.

There is forensic evidence suggesting that the two shrouds may be the same. Visual depictions of Jesus on the cross, which were probably based on the image in the cover held at Constantinople, in the Pray Codex are compellingly similar to the image found on the Shroud of Turin. Additionally, the Pray Codex reveals a herringbone pattern in the weave of the linen, the same pattern seen in the Shroud of Turin. Experts who have studied the Constantinople shroud suggest that the two are almost definitely the same. The Shroud of Turin is at least 12th century, not 14th. It may not be a Medieval forgery, after all.

4. The de Charny Family Was Connected to the Battle at Constantinople

During the Fourth Crusade, instead of going all the way to the Holy Land, many of the European crusaders went to their Christian brothers and sisters in Constantinople and ransacked the city. Most of these crusaders were from France, and Geoffroi de Charny’s wife was a direct descendant of one of the leaders of the Fourth Crusade during the ransacking of Constantinople. Presumably, he obtained the shroud while on the crusade, and it quietly remained within the family until Geoffroi made it public.

Of course, the fact that Geoffroi de Charny was connected to a leader in the Fourth Crusade doesn’t mean that the Shroud of Turin is the authentic burial cloth of Jesus. It doesn’t even mean that the shroud that he came to possess was the same one that had been in the possession of the Byzantine Church. Some might decry that the evidence is circumstantial at best. However, given the forensic evidence connecting the Shroud of Turin to the shroud at Constantinople, there may be something of substance to the otherwise dubious claim. Not the claim that the Shroud of Turin indeed is the burial shroud of Jesus, but that Geoffroi de Charny came to possess the cover of Constantinople.

3. A Similar Shroud Dates to at Least the Fifth Century

The Sudarium of Oviedo is a piece of cloth kept at Cathedral of San Salvador, within the Camara Santa (holy chamber), in Oviedo, Spain. Many of the faithful believe that it was the cloth used to wrap the face of Christ when He was buried. It has reliably been dated to at least the fifth century, and its history for at least a century prior can be accurately traced. If the Shroud of Turin can be connected to the Sudarium of Oviedo, then it is likely much, much older than even the 12th century.

As it turns out, not only was the image on the Shroud of Turin made with human blood, but it was of the same blood type – AB – as the blood on the Sudarium of Oviedo. AB blood is the rarest type in the world, so the fact that it is found in both shrouds is not likely to be a coincidence. Additionally, the facial images on both of the coverings match up exactly, showing that they were probably both used on the same person. Not only is the bloodstain a match, but so is the pattern of pre-mortem and post-mortem blood. The forensic evidence gathered is strong enough to reasonably conclude that both clothes were used on the same body. The Shroud of Turin is probably the fifth century, if not earlier.

2. Forensic Evidence Suggests the Shroud of Turin May Date to the First Century

There are several remarkable details regarding the shroud that suggests that not only is it not a Medieval fake, but it can be reliably placed within what is known about first-century Palestine. For one, Jewish law required that a body had to be wrapped in linen cloth that had not been mixed with wool. The Shroud of Turin is made of linen, and though there are traces of cotton in it, there is no wool. It also corresponds precisely with the measuring unit that was used by first-century Jews, the cubit. It is exactly two cubits wide and eight cubits long.

1. The Bloodstains are Consistent with Roman Crucifixion

To further reiterate the significance of the bloodstains on the cloth, researchers have pointed to the fact that they perfectly resemble what is now known about Roman crucifixions. In Christian art, particularly in the Middle Ages, Jesus is frequently depicted as having nails going through the palms of His hands and the fronts of His feet. However, what we now know about the Roman crucifixion, based on skeletons of crucifixion victims, is that nails went through the wrists and the heels.

If a Medieval forger were trying to make the shroud a hoax, he would have undoubtedly mimicked the bloodstains common in Christian iconography, as he or she would likely have not to know where the Romans placed the nails. The image on the shroud shows that the nails went through the wrists and the heels. If the cover indeed does predate the Middle Ages and if it is a forgery, it could only have been made by someone with firsthand knowledge of Roman crucifixion practices. Furthermore, the shroud shows bloodstains consistent with what the New Testament gospels describe as a crown of thorns being placed on Jesus’ head. Using a crown of thorns was not known to be a common practice, and it is unlikely that many other crucifixion victims were subjected to it.

All of the evidence suggests that the Shroud of Turin could actually be, in fact, the burial shroud of Jesus Christ. The mystery as to how the image came to appear is still a mystery, one that again convinces people that it is a fake. However, perhaps the fact that an image formed on the shroud is evidence of the resurrection.

“History of the Shroud of Turin.” Wikipedia.

Christianity – What Is the Shroud of Turin? Facts & History Everyone Should Know?

Compelling Truth – Did The Crucifixion Nails Go Through Jesus’ Hands Or Wrists?

Shroud – Did Geoffroy I de Charny Obtain the Present Turin Shroud on the Smyrna Campaign of 1346?

Live Science – Jesus Wasn’t the Only Man to Be Crucified. Here’s the History Behind This Brutal Practice.