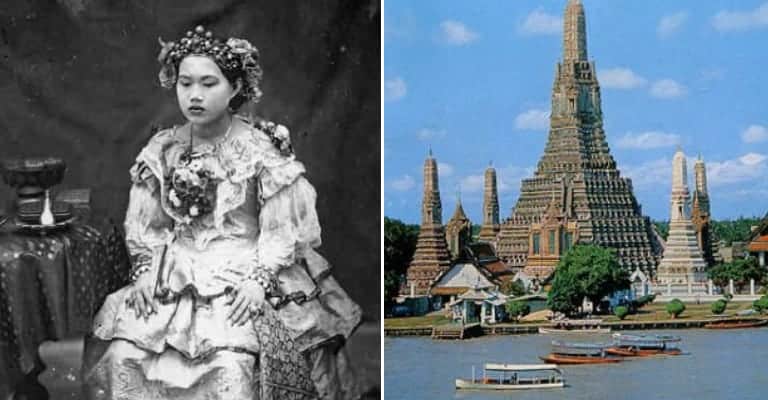 Princess Sunandha Kumariratana, born on November 10, 1860, was the daughter of Rama IV, or King Mongkut, and his princess consort, Piam. It was in the land of Siam, what is now known as Bangkok, Thailand. Siamese kings typically kept large harems of wives and concubines, and as such, they tended to have dozens of children, as exemplified in the novel Anna and the King and the movie The King and I. King Mongkut had 82 children.

As a teenager, Princess Sunandha married Rama V, who became known as King Chulalongkorn and became the queen consort, meaning that she held all of the formal titles associated with the king but did not possess his military or political power. He also married two of her sisters, though many claim that he loved Sunandha the best.

Today, the progressive king is remembered for many of his reforms that helped bring the ancient kingdom into the modern world and prevented the colonization of Siam by Western powers. The queen, however, is remembered for her senseless death that could have easily been avoided. She, her daughter, and an unborn child – presumably a son – are memorialized at the Bang Pa-In Royal Palace in modern-day Bangkok, where a marble monument is dedicated to the young, tragic queen.

Touching a Member of the Royal Family and Other Superstitions

Royals tend to have special laws relegated to them, many of which keep them from mixing with more common people. For example, there are strict protocols in the United Kingdom regarding that state if and under which circumstances someone may be permitted to touch a member of the royal family. The present law is probably less rooted in superstition and ancient tradition than it is in the fact that the royals want their person to be respected. Think of it as celebrities not wanting the paparazzi touching them; their personal space is invaded enough with constant onlookers.

An ancient Siamese law stated that no commoner was to touch a member of the royal family, under pain of immediate death. This law may have been rooted in superstition, religious belief, or an ancient tradition whose origins are no longer known. This law applied to Queen Sunandha and ultimately led to her untimely demise at the age of 19.

The Siamese culture was full of many other traditions and superstitions, as well. One stated that you should never try to rescue a drowning person. This tradition may be found in well-formed logic, because if you venture out into dangerous waters and are not an exceptionally skilled swimmer, you may die, too. However, the Siamese believed that if you try to rescue a person who is drowning, then even if you survive, the river will come back and claim your life as a substitute for the one that you snatched from it. If a royal person were drowning, he or she would undoubtedly be doomed; that is, if the river didn’t take the one who tried to save him or her, the law would mean that the potential savior would be killed.

Political Turmoil and the Reforms of Rama V

King Rama V, the husband of Queen Sunandha, is remembered for being a progressive ruler who instituted many reforms to Siamese culture. At the time of his reign, from 1868 until 1910, Western powers, notably France and Great Britain, were colonizing much of the eastern world. Much of the Middle East, Africa, and parts of Asia were under colonial rule, meaning that their resources were exploited, many of the people practically enslaved, and the country largely pillaged to benefit the colonizing country.

India provides a case study on how damaging colonial rule was; while the British justified it by claiming that they were acting in benevolence and out of a paternalistic concern, British companies — most notably the British East India Company — were filling their pockets with profits made from cheap labor and exploitation of the natural resources. The Indian people were forced to work so hard for the colonial overlords that they had little left over to take care of themselves. Today, many of the problems in modern India can be traced back to the harsh effects of colonial rule.

Siam’s king was intent on making sure that his country did not fall into the hands of the would-be colonialists.
Additionally, political turmoil towards the beginning of his reign led King Rama V to believe that he needed to curb the de facto power of the aristocracy. As such, he introduced many reforms that helped consolidate his rule while also benefiting the ordinary people of Siam. One of his first reforms was the establishment of an auditory office for tax collection, a duty that had previously been performed by corrupt tax collectors. This move took much revenue away from the aristocracy and thereby effectively limited their power.

The king created the Royal Military Academy to train a Western-style military that would protect the kingdom and help centralize his rule. He abolished slavery — citing the bloodbath of the American Civil War and wanting to avoid that in his own land — and instituted democratic reforms, turning the Kingdom of Siam into a constitutional monarchy that gave the people a voice in their government. He also allowed dissenting, radical voices to be published and released people who had been political prisoners.

There were additional ancient, or at least very old, traditions that Rama V also abolished. The corvee system required ordinary people to provide free labor for the government for a certain number of days each year; this was effectively removed. He also despised the system of prostration, in which people who approached royalty had to prostrate themselves to the ground until their business with the royal was complete. The act of prostration could be physically taxing and was also dehumanizing, elevating, as the king believed, the members of the royal family at the expense of the commoners.

One ancient tradition that he did not reform, at least not until it was too late, was that no one was allowed to touch a royal.

Rama V married Princess Sunandha when she was still a teenager. Together they had a daughter, Princess Karnabhorn Bejraratana. When the queen consort was 19, she was pregnant again and believed the child would be a boy. As a male, he would stand to inherit the throne of Siam. While she was pregnant, she went on a trip to visit the royal family’s summer residence, Bang Pa-In, which lay outside of Bangkok. The king had spared no expense in ensuring that it remained a magnificent place for the family to find respite from the challenges of running a country.

In order to reach the palace, the queen consort and her daughter had to cross the capricious and tumultuous Chao Phraya River, which is the largest one in Siam. The guards that accompanied them put them into a separate boat, presumably because their status was so high that they could not travel in the regular boat, which was dragged by a bigger boat across the river. However, strong currents — not at all uncommon to the river — rose up, seemingly out of nowhere, and caused the royal vessel to capsize. Both the pregnant queen consort and the two-year-old princess were thrown into the river.

The story might not have ended there if it were not for this no-touching rule. In fact, some sufficient onlookers saw the horrifying event and could have swum into the water to save the lives of the queen consort and princess. However, the guards accompanying them actually forbade anyone from getting into the water, upon penalty of death. The law against touching royalty would be upheld, even if it meant that three members of the royal family – Sunandha, her daughter, and her unborn child – would perish.

However, King Rama disagreed with the guards’ application of the law and had them imprisoned for causing the death of his favorite wife, daughter, and unborn child. In his grief, he arranged and funeral procession that would be one of the most expensive and elaborate in history; it cost over half a million dollars. He had the two lost children embalmed so that they sat upright on gold thrones, surrounded and adorned with gold and costly jewels as if they were still alive with their rightful places as children of the king.

The king waited for a full seven months before he could bear to have Sunandha’s body cremated; during this time, he had new buildings constructed for the cremation ceremonies. The ceremony lasted for twelve days; even after it was over, the king did not lay her ashes to rest for nearly another year. He also completed the summer palace which the queen and her daughter had been traveling to when the fateful accident occurred. Marble monuments were constructed to honor her. Today, it still stands as a legacy to the queen and the law that ultimately cost her and her children their lives.

Fortunately, after that fateful day, the law that forbade anyone from touching a Siamese royal was repealed.

“The Thai queen who couldn’t be saved because an ancient law said it was forbidden to touch a royal,” by Stefan Andrews. The Vintage News. April 30, 2018.