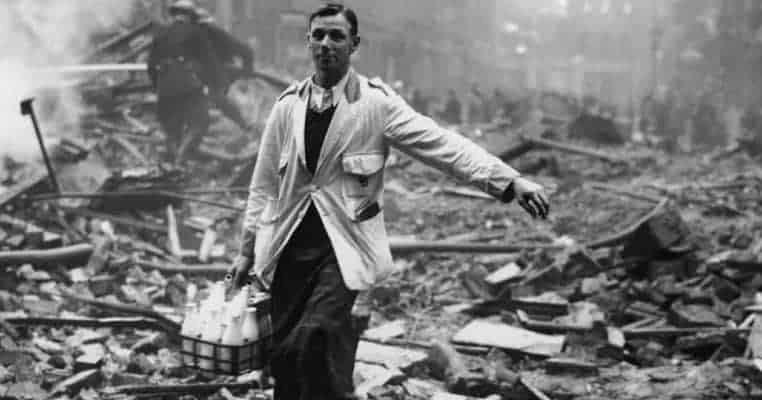 The 1940 Blitz, when Hitler tried to bomb Britain in submission, is often viewed as a time of common heroism. British civilians refused to panic, came together across social lines, and kept their stiff upper lip, while keeping calm and carrying on in the face of terror and random death stalking them from the skies. Britons, particularly the Londoners whose city was the German bombers’ main target, toughed it out and went about their daily lives while maintaining a remarkable level of normalcy in the midst of daily devastation and havoc.

However, the reality was more complex. There was plenty of stiff upper lip and keeping calm and carrying on, and no shortage of everyday courage and heroism. Given the dire circumstances, Londoners were, indeed, remarkably resilient. However, there was also no shortage of anxiety and panic. And contra the commonly held perception of social equality in the face of a common foe, the misery of the Blitz was not equally shared: it fell heaviest upon the poorest Londoners, particularly those in the East End. Nonetheless, the experience did end up drawing the classes closer, mostly by changing the upper classes’ perceptions of the lower ones.

In May of 1940, the Germans sprang their blitzkrieg on the Western Powers, to devastating effect. Within six weeks, they rolled over the Low Countries, crushed France, and chased the British out of Europe. Hitler figured that the war in the west was all but over and that a chastened Britain, realizing that its situation was hopeless, would soon sue for peace. He was willing to be generous, as he defined the term, and allow the British to keep their empire, in exchange for recognition of German supremacy on the European continent.

To the annoyance of the Fuhrer, the British failed to see things his way. Instead, under the leadership of the pugnacious Winston Churchill, and buoyed up by their Prime Minister’s defiant rhetoric, the British geared up for a protracted fight. Reluctantly, Hitler ordered plans for an invasion of Britain, codenamed Operation Sea Lion. A prerequisite for Sea Lion’s success was German mastery of the skies over southern England, and the German bid to secure that aerial supremacy led to the Battle of Britain, July 10th to October 31st, 1940.

The Luftwaffe came close to winning, but just when it had the Royal Air Force on the ropes, fate intervened to save the defenders – and trigger the London Blitz. On the night of August 24th, some German bombers flew off course and accidentally bombed London. Churchill interpreted that as deliberate, and the following night, 40 RAF bombers struck Berlin in retaliation. That incensed the Fuhrer, who was already frustrated with the failure of his airmen to subdue the British, and prompted him to redirect the German effort from crushing the RAF, to crushing British morale and terrorizing Britain into submission.

On September 4th, Hitler gave a grandiose Hitlerean speech, in which he vowed to crush his stubborn opponents: “You will understand that we shall now give a reply, night for night, and with increasing force. And if the British Air Force drops two, three or four thousand kilos of bombs, then we will drop 150,000, 180,000, 230,000, 300,000 or 400,000 kilos, or more, in one night. If they declare that they will attack our cities on a large scale, we will erase theirs! We will put a stop to the game of these night pirates, as God is our witness. The hour will come when one or the other will crumble, and that one will not be National Socialist Germany.”

The Luftwaffe began delivering on Hitler’s vow three days later, with its main focus being London, which was struck with a major raid on September 7th. At around 4 PM that day, about 350 German bombers, escorted by over 600 fighters, blasted the British capital in a raid that lasted until 6 PM. Two hours later, the second wave of bombers, guided to London by the fires set by the first raiders, worked the city over some more, wreaking havoc until 4:30 the next morning. It was just the start of the London Blitz, and for the next 57 days, the city was bombed either during the day or night and sometimes both.

When the war began, London had a population of about nine million people, jammed into 750 square miles. British prewar planners assumed that a sustained bombing campaign of 60 days would kill about 600,000 Londoners, and injure another 1,200,000. As things turned out, the Germans did target London with a sustained bombing campaign that lasted for nearly two months. Fortunately, the actual resultant casualties, while bad enough, were nowhere near the apocalyptic figures predicted.

British authorities, with their upper-class prejudices, feared that London’s working-class neighborhoods, such as the East End, would become unstable under a bombing campaign. Nonetheless, in a reflection of their priorities, the East End and other poor parts of the city ended up with the fewest bomb shelters per capita. Between that, the low quality of working-class housing that made it extra vulnerable to bomb damage, and the fact that the area, with its docks, shipping facilities, and other industries, was extra attractive to German bombers, East Enders got the worst of it.

Within the first six weeks of the Blitz, thousands were killed and wounded in working-class neighborhoods, at significantly higher rates than those suffered in the rest of London, and about a quarter-million of the city’s poorest citizens had been bombed out of their homes. Making matters worse, the authorities initially tried to keep civilians from using the London Tube – the city’s underground metro system – as shelter during the bombing. They were forced to quickly relent, and soon, about 150,000 people could be found sheltering in the Tube on any given night.

Self-organized communities developed underground, amounting to mini-governments created by the sheltering denizens. Among other things, they divvied up the limited space into sleeping areas, smoking areas, and play zones for children, and organized committees to settle disputes and lobby the authorities for improvements. That was worrisome to some officials, and Home Intelligence expressed concern that “people sleeping in shelters are more and more tending to form committees among themselves, often communist in character, to look after their own interests“.

On the other hand, the way the working class folk efficiently organized themselves underground, while toughing it out aboveground, changed the upper and middle classes’ poor perceptions of poor people. Before the war, the working class was routinely depicted negatively in print and media, with a snobbish historian’s dismissal of poor mothers as “slatternly malodorous tatterdemalions trailing children to match” being par for the course. Working-class conduct during the Blitz changed that, as writers and photographers and artists began depicting the slum dwellers as wielders of quiet dignity in the face of adversity. There was significant condescension in that, to be sure, but it was nonetheless a significant improvement over what had gone on before, and it did much to promote intra-class solidarity for the remainder of the war.

All in all, the Luftwaffe targeted London with 71 major raids in 1940 – 1941, and dropped nearly 20,000 tons of bombs on the city. When the Blitz finally ended on May 11th, 1941, over 28,000 Londoners had been killed, and more than 25,000 had been injured seriously enough to require hospital care. Property damage was extensive, and by the time the war ended, over a million and a half Londoners had been made homeless. It took years after the war had ended to fully repair the damage and restore the city to normalcy.

During the war, over 600,000 specially designed stretchers were made for Air Raid Protection (ARP) officers to tote the casualties. Made of steel – the easier to wash them after use or disinfect them in case of gas or biological attacks – they were sturdy, reasonably lightweight, and easy to maintain. When the conflict ended, there was a massive surplus of stretchers, and a massive dearth of resources in a Britain bankrupted by six years of war. Lest the costs sunk into the stretchers be forever lost – the quality of steel was not the most suited for melting and reusing – people cast around for the best means to reuse them.

Looking around London recovering and dusting itself, it was noted that the street railings of many of the city’s housing estates had been removed during the conflict to serve the war effort. Thinking outside the box, somebody had the bright idea of using the surplus ARP stretchers as street railings, by welding them vertically together and affixing them to posts. Thus were born London’s stretcher fences, easily recognizable from their steel wire meshing, and the two indents at the end of each railing, originally designed to raise the stretcher slightly off the ground.

Eight decades later, many London housing estates, particularly in the southern and eastern parts of the city, are still surrounded by those recycled ARP stretcher fences. Hundreds of thousands of Londoners walk past those railings each day, most of them oblivious to their fascinating history. With the passage of time, many of the stretcher fences have degraded, and today are in increasingly poor conditions, leading local authorities to remove and replace them with modern fencing. That prompted some activists to form the Stretcher Railing Society, in a bid to preserve at least some of that historic heritage – among the last tangible legacies of the Blitz.

Today, conservationists hope to raise awareness of the historic fences, raise money to preserve them, and place plaques to inform the public about the living history they walk past every day. As a leading conservationist put it: “I think it would be wonderful if more people knew about them and could engage with them. Anyone who we tell gets really excited and it’s a really fascinating social part of our history. … It’s quite hard to think of physical reminders of the Second World War. It’s extraordinary that they are still here.”

British Library – London During the Blitz: A Landscape of Fear and Shadows

Eyewitness to History – The London Blitz, 1940

JSTOR Daily, August 20th, 2018 – What Life Was Like During the London Blitz

Mashable – Sleeping in the Underground: Keeping Calm and Carrying On Below the Streets of London

History Extra – The Cruel Cost of The Blitz: How Did Everyday Britons Rebuild Their Lives?