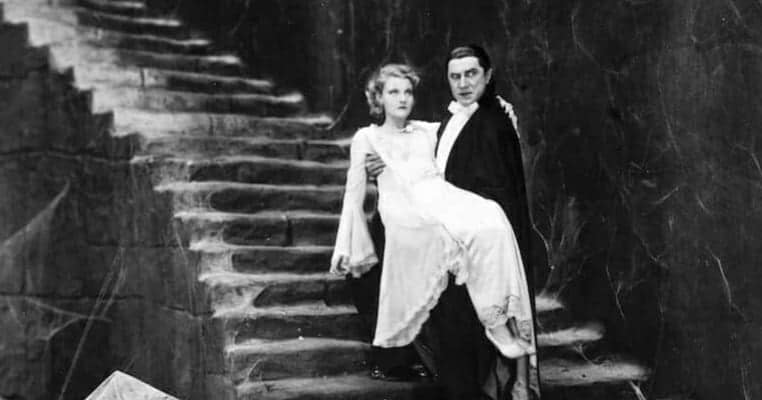 Dracula, and scores of other low budget vampire movies which loosely covered the character created by Bram Stoker continued to appear in film every couple of years or so throughout the 1970s and 1980s. Other versions of the vampire tale appeared, and actors such as Christopher Lee and Vincent Price made horror movies which mimicked the interpretation of Bela Lugosi in the classic Universal film. In 1979, Dracula returned in a version which faithfully followed the Bram Stoker novel and the successful stage adaptation. It was performed over 900 times on Broadway between 1977 and 1980, with the film shot concurrently.

Frank Langella portrayed the title role to critical acclaim and public approbation, but in reviews the performance was compared – perhaps inevitably – to Lugosi’s decades earlier. Unsurprisingly at the same time a gothic Dracula returned to first run theaters, a comic version also appeared, a camp film called Love at First Bite, starring George Hamilton. Langella’s performance drew approving reviews, as did the sets and mood of the film, but it was evident that Dracula’s power to make members of the audience faint from fear was a thing of the past.

The Universal Classic Monsters were born in the early days of talking movies, out of black and white films set in gloomy tones, sprinkled with the myths of Eastern Europe. Their initial impact was one of awe at the filmmaker’s ability to frighten the audience. More jaded later audiences learned to regard them with a snicker. Their images are recalled throughout the year, but never more so than in the days and nights as Halloween approaches. At every Halloween party, someone is likely to appear as one of them, in serious homage or in campy spoof. Sexy vampires have become as common as scary.

But the monsters worked their way into American culture and American history and they retain their place, though their ability to shock and frighten has faded into the mists which were so much a part of their image. Today they are regarded with fond amusement, an annual entity like the Easter Bunny or green beer for Saint Patrick’s Day. Every decade or so they seem to reappear, resurging like a delayed tide. Perhaps its just a quirk of the common memory reminding us all, deep down in some primitive instinct, “Even a man who is pure in heart and who says his prayers by night, may become a wolf when the wolfbane blooms and the Autumn moon is bright”.

“About Us. Famous Monsters of Filmland”. American Gothic Press. Online

“The Munsters: A Trip Down Mockingbird Lane”. Stephen Cox. 2006

“‘When the wolfbane blooms’ – birth of the werewolf”. Article, Universal Monsters Universe. Online