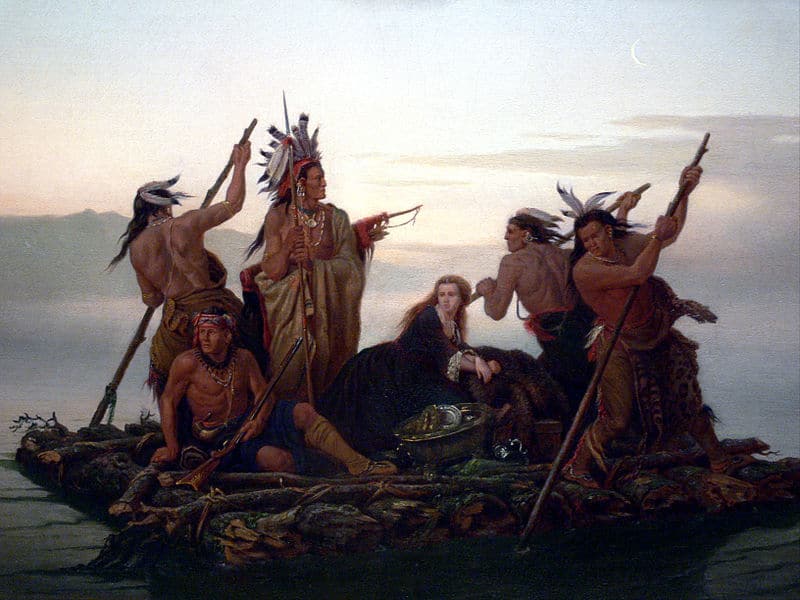 19. The withdrawal became a flight for life through the woods

Daniel Boone ordered his son Israel to mount a nearby horse and retreat across the ford. Some accounts say Israel refused to leave his father’s side, others that he hadn’t time to respond. He was shot through the neck and died on the battlefield. Daniel had no choice but to leave his son’s body on the field as he withdrew with his men. Once across the Licking, the retreat became a rout, with the militia fleeing towards Bryan’ Station, hoping to reach Logan’s force, and the Indians in hot pursuit, eager for scalps. The bodies left on the battlefield were quickly scalped and mutilated by Girty’s men, with several wounded killed by the Indians. Caldwell later claimed, preposterously, there were no wounded on the field.

Several Boone’s fought under Daniel at the Battle of Blue Licks, including his nephew, Squire and another nephew, Thomas, who was killed. A detachment from Logan’s force went to the battlefield several days later to bury the dead. They found the Indians had dismembered most of the dead before fleeing to the north. Official records show that 182 militia attacked the larger force of Indians in what some claim was the last battle of the American Revolution. Others point out it was the first battle of the last campaign of the American Revolution, as revenge for the 72 men killed in the ambush on the Licking River. By comparison, Girty and Caldwell suffered 7 killed, and 10 wounded.

If anyone deserved blame for the disaster at Blue Licks it was Hugh McGary, who survived the debacle in which most of his men were killed. In Kentucky, most of the blame was directed at George Rogers Clark, for not destroying the Shawnee during his 1780 campaign along the Little Miami and Mad Rivers. In November, 1782 Clark again crossed the Ohio River with a militia force of about 1,000 men. They advanced up the Great Miami River, where the Shawnee had relocated several of their towns. The 1782 campaign included the destruction of five abandoned Shawnee towns, but little actual fighting. The Shawnee simply receded further into the Ohio and Indiana country.

Clark destroyed the Shawnee town at Piqua, killing at least five Shawnee, at the loss of one man of his own, before turning back to the Ohio River. The campaign was the last of the American Revolutionary War, but not the last against the Indians of the Ohio Country. Nor was it the end of British support of the Indians in what became known as the Northwest Territory. The British attempted to create a state held by the Indians as part of the Treaty of Paris, to serve as a buffer between the new United States and British Canada. Failing in that, they continued to support the Indians in hopes of deterring rapid American settlement of the west.

21. Americans moved into the Shawnee lands north of the Ohio River in large numbers

Clark’s punitive expedition in 1782 was the last campaign of the Revolutionary War, but it was far from the last against the Indians of the Ohio Country, and Kentucky. Following the Revolution, veterans of the Continental Army were given land grants in the Northwest and Kentucky. Would-be settlers streamed down Ohio and up its tributaries. Sporadic attacks on settlers continued, particularly in the Ohio, Indiana, and Illinois territories. The Continental Army was disbanded and the Legion of the United States was created, mostly to protect the new settlements along the frontier. Pressure on the Indian lands increased, and violence between Indians and settlers was continuous.

In 1790, despite numerous treaties and agreements between the factions, a report to the administration of President George Washington claimed more than 1,500 settlers and militia had been killed in Kentucky alone since 1783. Hundreds more had been killed in Ohio and Indiana. The Shawnee and their allies had moved most of their towns west, along the Wabash River in Indiana and Ohio. George Rogers Clark was again commissioned to conduct a campaign along the Wabash to destroy the Indian towns in 1786, which though successful in achieving a ceasefire was marked by a mutiny among his troops. Clark was accused of being drunk on duty. His reputation in tatters he left Kentucky, moving to Indiana.

22. Daniel Boone fought one more campaign against the Shawnee in 1786

After witnessing his son Israel’s death, Daniel Boone moved yet again, to Limestone (today’s Maysville) on the Ohio River, where he opened a tavern. In 1786, he joined an expedition led by Benjamin Logan to destroy the remaining Shawnee villages along the Little Miami and Mad Rivers. The campaign led to the capture and destruction of 13 Shawnee and Miami towns, as well as their crops, and the capture of hundreds of Shawnee, including women and children. There were no major battles. Most of the Shawnee warriors had moved to the Wabash area to defend the towns there from Clark’s expedition. Among the captured was the aging Chief Moluntha, who flew an American flag above his lodge.

Moluntha surrendered peacefully. As his village was destroyed Hugh McGary, by then a Colonel in the militia, asked him if he had been in the Indian force at Blue Licks. Moluntha either misunderstood the question, or had in fact been at the battle (most sources state he had not) and answered in the affirmative. McGary killed the Chief with an axe, striking two blows before taking his scalp. McGary’s action was soon known throughout the Shawnee nation, which increased its attacks along the frontier. McGary was not punished. Daniel Boone witnessed the act, and after his return to Limestone, he took no further part in the Indian wars in the Northwest Territory.

23. Daniel Boone suffered several financial setbacks near the end of the 18th century

Boone’s tavern was a success, in part due to his fame. Situated in a thriving port on the Ohio River, numerous settlers visited it, eager to meet the famous frontiersman. Legend has it that Boone relocated whenever the population grew too large for his taste, seeking “elbow room”. That legend is false. He was a politically savvy businessman, speculating in land for himself and surveying tracts for others. Boone grew prosperous enough to own seven slaves. He was elected to the Virginia General Assembly three additional times. Land speculation led to several business failures, as disputes over claims led to lengthy legal maneuvers and indebtedness.

In 1788, he sold his tavern and moved to Point Pleasant, where he continued to work as a surveyor and operated a general store and fur trading post. After several years in the river town, he returned to Kentucky in 1795. Legal claims and counterclaims continued to erode his remaining assets. In 1799, frustrated with the American legal process, he moved to Missouri, taking most of his family with him. Missouri was then a part of Spanish Louisiana. The Spanish authorities assigned him as the regional judge, in a legal system in which he was simultaneously the jury, a position known as a syndic. He also received land grants from the Spanish government of Louisiana.

24. Boone lost his lands in Missouri following its entry into the United States

In 1804, Missouri became a territory of the United States, and Boone lost his position as syndic and most of his land claims. He successfully petitioned Congress to restore his land claims, though the process took years and they weren’t restored until 1814. He then sold his Missouri claims to pay debts in Kentucky, where several warrants had been issued for his failure to appear in legal actions regarding his old Kentucky claims. Boone continued to hunt, fish, and trap for the rest of his life, including one trip in which he ranged as far as the Yellowstone River, if the stories are true.

Daniel Boone died in September 1820, at his son Nathan’s home in Missouri. He was buried next to his wife’s grave (Rebecca Boone died in 1813) near his daughter Jemima’s Missouri home. According to some, both were disinterred and moved to Frankfort, Kentucky, in 1845. Today, two states claim the graves of Daniel and Rebecca Boone, Missouri and Kentucky. Most of Boone’s descendants support the Missouri claim that he is interred in Old Bryan Farm’s graveyard. Kentucky claims he rests at Frankfort Cemetery.