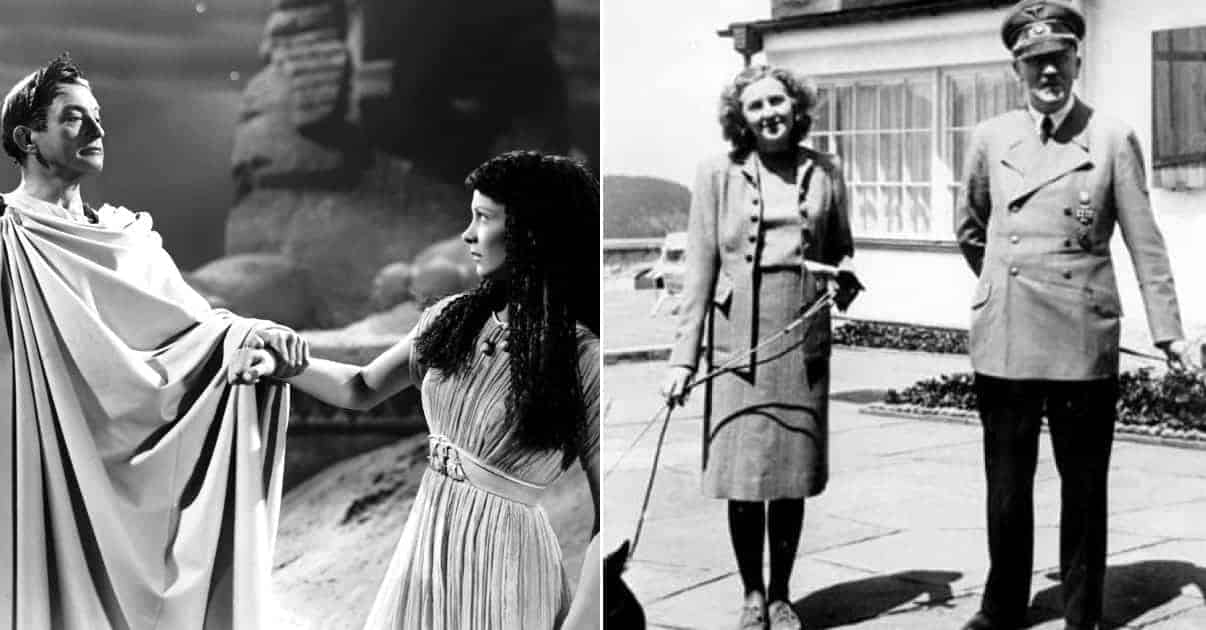 Everyone knows who Eva Peron was, the mighty ‘Evita’ of popular culture, but most will be hard-pressed to remember Juan Perón, her powerful husband, and President of Argentina. When the wife is ultimately more famous than the husband, and without any elected office, then you know you are dealing with a powerful woman.

María Eva Duarte was born on 7 May, 1919, in Los Toldos, Argentina. From a poor background, she dreamed of becoming an actor. At about age fifteen, she moved to the capital Buenos Aires, and there enjoyed modest success in the theatre, and a little more success as a radio theatre actor. Her true vocation, however, came when she met and married Juan Perón, a colonel in the Argentine military, a government minister, but crucially, in 1946, president of Argentina.

Juan Perón was, of course, brilliant in his own right, but he was also mono-dimensional and without obvious charisma, and initially, Evita offered him some badly needed glamor. Soon, however, she began to appear less as an accouterment and more as a center of power in her own right. She used her position to advocate for causes such as women’s suffrage and improving the lives of the poor, but she also had a hand in the practical administration of the state, effectively running the ministries of health and labor.

Very quickly, Evita’s natural charm, good looks and phenomenal skill as an orator won her a following among Argentina’s poor. She seriously considered an invitation to run as vice-president in the 1952 general election, but realizing that this would be a bridge too far, she declined. Nonetheless, behind her husband, she campaigned vigorously, and when the results were in, and Juan Perón was declared the winner, it was found that a significant majority of female voters had put their cross in his square.

Perhaps Evita Perón’s greatest contribution came in later years. She died of cervical cancer in 1952, but her legacy remained and remains potent in Argentina. Argentina has, since her death, had two female presidents.

A First Lady who can pass two presidential terms without a breath of controversy is usually one that has not participated at all. Eleanor Roosevelt was not that type of First Lady. When in 1905, she and her distant cousin Franklin Roosevelt married, Eleanor had already turned her back on the expectations of a New York debutante and begun to explore the frontiers of practical feminism. She did not overtly espouse feminism as a doctrine, but, as the saying goes, she certainly walked the walk.

Her marriage to Franklin D. Roosevelt was not a passionate romance, but a meeting of great minds and a merger of compatible agendas. Early in his marriage Roosevelt had an affair with his wife’s social secretary, which was a caddish act for which she never really forgave him. Divorce was discussed, but both parties realized that their respective careers would be better served by remaining together. Never again was their relationship intimate, although a fraternal fondness proved adequate for their most mutually challenging years.

Eleanor Roosevelt began her political awakening in a community-minded, wealthy New York family, and it evolve through phases of uncontroversial welfare work into something much deeper and more engaged when her husband won the keys to the White House in 1933.

Roosevelt can be considered great for leading his nation through the Depression, and later through WWII. These were his major achievements, but behind the scenes, and sometimes on center stage, Eleanor was hard at work too.

Mainly, Eleanor’s thrust was in the direction of emancipation of human rights, and the older she got, the less apologetic she was inclined to be. She began regular White House press conferences solely for female news correspondents, and news wire services were allowed access to the White House only if they displayed a fair gender distribution among senior staff. She also fetched up the baton of practical political work as FDR became increasingly chair-bound by his late attack of polio. Needless to say, the male-dominated political establishment had much to say about this, but Eleanor’s common touch endeared her to the grassroots support base that FDR had acquired thanks to his New Deal policies.

Racial equality was naturally a key issue for her, and one particular incident stands out. When, in 1939, the Daughters of the American Revolution (DAR) would not permit black opera singer Marian Anderson to perform in Constitution Hall, Eleanor resigned her membership of the organization, arranging instead a performance at the nearby Lincoln Memorial. On the day, the event morphed into a massive outdoor celebration attended by 75,000 people.

After FDR’s death, Eleanor was appointed to a UN commission on human rights, and she was instrumental in drafting the Universal Declaration. She remained politically active, and vocal, until her death in 1962.

We are going to close out with a couple of powerful ladies in the two great religions of the modern age, the first of which is Fatima, known traditionally as Fatimah bint Muhammad, or the Daughter of Muhammad. We have touched on wives and mothers, but history is also replete with daughters who quietly promoted the agendas of powerful fathers, and some not that quietly.

One indication of quite how important, and revered Fatima is in the Islamic world is the fact that the name ‘Fatima’ is probably the most popular throughout the faith. In a situation of faith, however, mythology often merges with fact, and the lives and achievements of the various characters of that faith are molded and manipulated to fit the needs of doctrine. Obviously, this is true for Fatima, but a name, and a message, cannot survive for millennia if its basis is not sound.

As the story goes, Fatima was the daughter of Khuwaylid (Khadijah bint Khuwaylid), the first of Muhammed’s eleven wives. The young Muhammed worked for her, and it was she who proposed to him, so clearly, in matters of life and destiny, the apple did not fall far from the tree. Fatima was born around 605 CE, and grew up as her father was beginning to experience his early revelations, and the great Islamic faith was in incubation. Muhammed’s message, of course, was poorly received by the establishment, and in the beginning, times were hard, and dangerous.

She was perhaps the closest of his children to her father, and she was certainly more supportive of the development of the early doctrine of Islam than anyone else around him. When, in 632 CE, the Prophet died, his loving daughter was quick to follow. She was twenty-nine.

Fatima certainly played a pivotal role in her father’s life and was key to the development of Islam. As the wife of Ali, the third Caliph, she produced sons no less formative in the development of Islam. Although entirely supplicant to the needs of her father, and as such, uncontroversial, she has become a somewhat divisive figure in modern Islam. Both major branches of the faith hold her in high esteem, but for the Shia branch, she is much more highly placed. As the wife of Ali, considered to be the first Imam, and the mother of Hasan and Husayn, the second and third Imams, she obviously is a figure of great importance. By the Shia, however, somewhat like Mary, the mother of Christ, she is seen as immaculate, and sinless, and however she is viewed, she is certainly regarded as one of the great women of Islam.

Mary, the Mother of Christ

Probably the most famous mother in history, the name Mary, Maria or Miriam all refer to the woman who gave birth to perhaps the most famous prophet that ever walked the earth; and she did so without the usual preliminary of copulation. The Immaculate Conception is central to Christian doctrine because it stands as proof that Christ was divine. Needless to say, this particular snippet of Christian mythology has been the subject of cruel jokes since it was first devised, and the ostensible father of Christ, Joseph, is portrayed quite frequently as the most shamelessly cuckolded man in history.

In a previous millennium, of course, this author would have been burned at the stake for such a heretical observation, but thankfully, not today. Mary, the mother of Christ, however, her gifted son was conceived, sits at the penultimate zenith of the Christian faith, and in particular the Catholic faith. And of all of the various splintered denominations of faith, be they Christian, Islamic, Judaic, Catholics outnumber any other.

But who was Mary, and why is she still so important to the Christian faith? Well, quite simply, it was she who guided Jesus through his formative years, and she who remained vital to him until the moment he was nailed to the cross, and indeed, beyond. As Jesus hung on the cross, he said to the disciple John ‘Behold thy mother’, implying that Mary was the mother of all, and through her, any devotee could become a disciple. This immediately places Mary at the center of the nascent Christian faith.

Sadly, there is no reliable record detailing any of her specific functions as the ministry of Christ begins, but one can assume that an unmarried wandering prophet, whose mother remained a factor in his life, will have relied frequently on her support. Developing a faith, in particular one with the inevitable end that Christ suffered, is one that would have been frequently characterized by doubt and self-questioning. Jesus, of course, enjoyed the support of twelve disciples, but perhaps more importantly than that, he relied on the support of his mother.

The emergence of Mary as a central figure of veneration serves a modern purpose also, insofar as it identifies a woman at the center of the Christian faith, which offers not only diversity but a role model for women infinitely adaptable to evolving circumstances. As faith, and matters of faith fade somewhat in the modern era, the notion of the Virgin Mary has become vague and ill-formed in the minds of modern generations, and it is often hard to recall quite how pivotal this woman was to the development of arguably the most influential faith in history.

“Paul McCartney: Yoko Ono did not break up The Beatles”. The Guardian, November 2012

“Why the great love story of Napoleon and Josephine Bonaparte wasn’t that great after all”. NZ Herald.16 Mar 2019