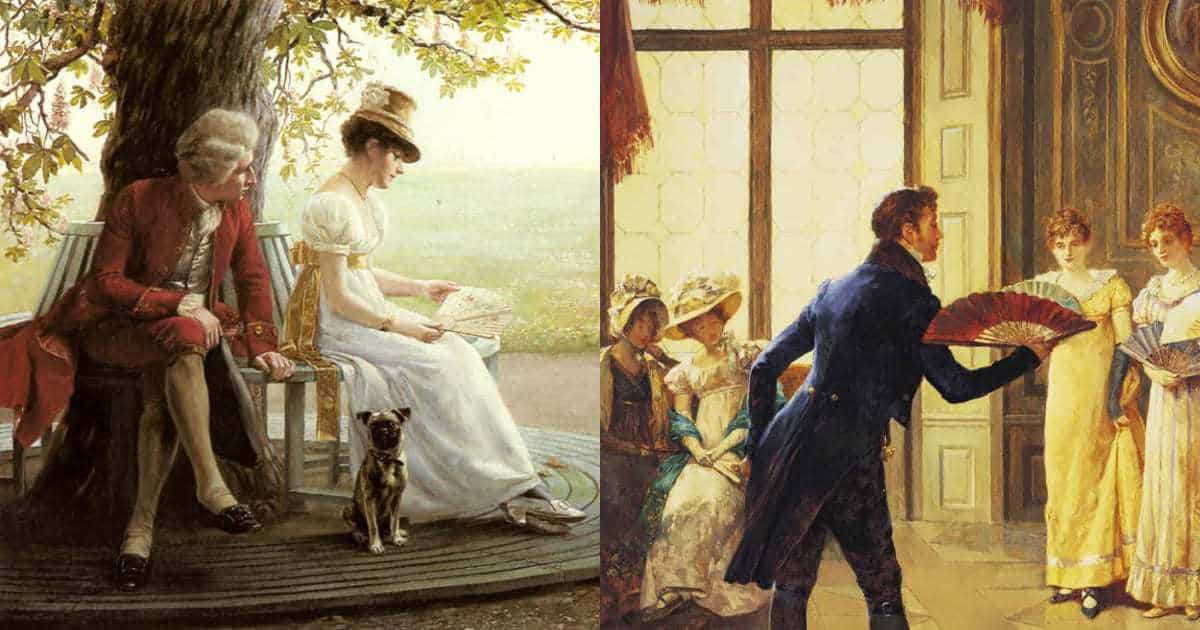 DO remember your manners at a dinner party

Just like dances, dinner parties were complex social events with their own specific set of rules. Breach the etiquette and you not only risked embarrassing yourself in front of your peers, but you might also find yourself with a reputation for being uncouth, with invitations suddenly drying up. Luckily, as with most things in the Regency era, it was relatively simple for a lady to do what was expected of her. Above all, the key was to keep quiet, let men take the lead and not to get ideas above your station!

If you were the hostess, then you would sit at the head of the table, with the (male) guest of honour to your right. The rest of the seating plan was up to the host or the hostess, though it was generally the thing to ensure men didn’t sit next to their wives. Additionally, when possible, men and women should be evenly distributed around the table. And, of course, it goes without saying that both a lady and a gentleman should dress for dinner. To arrive in day clothes would be regarded as a sign of utmost disrespect.

Dinner parties during the Regency era were as long as they were complex. Anything from between five to 25 courses were served, though the evening always started with a bowl of soup. According to the etiquette guides of the time, a lady must never refuse soup. If she wasn’t hungry or simply didn’t like the dish, it was considered far politer to simply toy with her food than to leave it completely untouched. If she was hungry, then soup should always be sipped from the side of a spoon, never from the tip. And, of course, the soup should be consumed silently. Slurping was regarded as the height of bad manners for a lady!

As the evening progressed, servants would bring new dishes, with cut meats being the main course. A gentleman was permitted to serve himself and those around him. However, he would never fill a lady’s plate too much. Neither should a lady ask for too much. After all, a big appetite was seen as being unladylike. Once her plate was full, a lady was expected to eat a little bit of everything at once. For instance, an ideal forkful would consist of a morsel of meat, a sliver of potato and a single pea. This could be washed down with wine; there was no rule against women drinking alcohol. However, a lady would never ask for wine, she would wait to be offered it. And even then, she should limit her intake lest she is judged for drinking like a man.

After dinner, of course, the ladies were expected to retire to a special â€˜withdrawing room’, leaving the chaps free to enjoy talk and conversation. Even in the company of other ladies, a hostess would never take obvious pride in her dinner party. Instead, she should remain silent, allowing her guests to compliment the quality of the food and company. Attempting to break with this convention was a serious social faux-pas, and indeed would remain so for many decades after the Regency era had come to an end.

DO keep your hands to yourself!

As you might expect of such a tightly-wound society, touching was largely to be avoided. Or, if not avoided at all, then there were strict rules as to what was acceptable and what wasn’t. And, of course, these unwritten societal rules were particularly relevant for ladies. Above all, failing to act properly could harm your reputation and, more importantly, could even seriously damage your chances of gaining entry into â€˜high society’ and enjoying the many social – and economic – benefits this entailed. So, what were the rules on touching other people?

For a well-bred lady, even shaking the hands of a gentleman could be seen as being overly familiar. Indeed, handshakes were largely confined to gentlemen, and even then, a man would only shake the hands of a peer of similar social rank, never with a superior or – heaven forbid! – a servant. To get around this, ladies were permitted to gently squeeze the hand of a man she had already been introduced to, though the etiquette handbooks of the time warned against excessive displays of affection.

Between women, the rules were a bit more relaxed. Sisters were permitted to kiss one another on the cheek. A lady might also kiss a female acquaintance or friend briefly on the cheek. Again, however, such open displays of familiarity and affection were to be confined to women of the same social rank. At the same time, a lady may permit a man to put her shawl around her shoulders or help her on and off a horse. She might even offer him her hand to kiss. But lingering touches or overly-passionate hand kisses would most definitely become the subject of gossip.

DO keep quiet about any extra-marital affairs

The Regency Era wasn’t as stuffy as some accounts might portray it as being. The big cities of England, and in particular London, were growing and modernizing quickly. And this, of course, meant that there were many vices for a gentleman to enjoy, including drinking, gambling and meeting with women of â€˜ill repute’. A lady was not only expected to steer well clear of such decadent activities but was, moreover, fully expected to pretend they didn’t even exist. As strange as it might sound, women of the time were to feign ignorance about all â€˜male activities’, however much this might hurt her, or simply inconvenience her.

For instance, ladies were, as a rule, to avoid walking or driving their carriages down certain streets in London. St James’s Street, home to several gentleman’s clubs, was strictly off-limits. Similarly, Piccadilly was seen as potentially corrupting for delicate ladies, so the â€˜fairer sex’ was advised to stay away. Any woman seen walking down either thoroughfare without a male chaperone accompanying her should expect to be the subject of much malicious gossip, with her character called into question.

But it wasn’t all bad. For their part, husbands were expected to ensure that his extra-curricular activities remained completely separate from his marriage. To bring scandal upon a lady was the height of ungentlemanly behavior in Regency England. Furthermore, for their part, a lady could take a gentleman lover, so long as she had first given birth to a child – and thus, provided her husband with an heir (and, ideally, with two children, or â€˜an heir and a spare’). It goes without saying, however, that any affairs should be conducted completely discreetly, so a lady should choose her extra-marital lovers extremely carefully indeed.

“The middle classes: etiquette and upward mobility”. Kathryn Hughes, The British Library, May 2014.

Chicago Tribune – How Accurate Is â€˜Bridgerton’s’ Tale of Sex and Scandal in Regency England?

Randombits of Fascination – Social Networking in the Regency Era

Walter Nelson – The Etiquette of the Ballroom