Shocking Marriage Details from History that Really Take the Cake 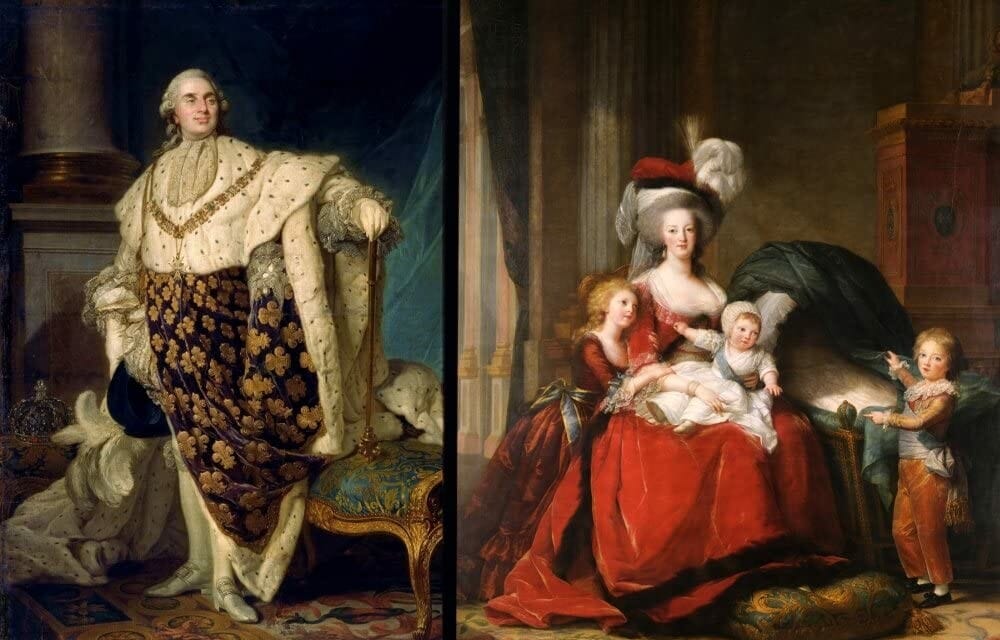 Shocking Marriage Details from History that Really Take the Cake

The French Revolutionary Wars, and later the Napoleonic Wars into which they seamlessly segued, roiled Europe and much of the world from the 1790s until the Battle of Waterloo in 1815. The years after the French Revolution broke out in Paris were tough on the French king and queen. After a revolutionary mob stormed the Bastille in 1789, Louis XVI decided to go to Paris as a good will gesture towards the revolutionaries. Marie Antoinette went into hysterics when her husband left. It took plenty of work by Axel von Fersen and other close intimates to calm the queen down.

A few months after they stormed the Bastille, the unwashed masses burst into the Palace of Versailles in October, 1789, and forcibly transferred the royal family to Paris. Eventually, both were executed. However, Louis XVI and Marie Antoinette, helped by Count Axel von Fersen, had nearly avoided that fate. Von Fersen did not abandon his lover after revolution swept her country. The love of the French queen’s life tried to help her – as well as her royal hubby whom he had cuckolded – escape from revolutionary Paris to a monarchist stronghold. They almost made it.

Since the moment they were taken to Paris by a revolutionary mob, King Louis XVI and Marie Antoinette lived as virtual prisoners of their subjects. Their marriage was further strained – but in some aspects also strengthened – by the shared sense of humiliation they felt as they were forced to adjust to the role of constitutional monarchs. Eventually, the royal couple decided to slip out of Paris. Count Axel von Fersen began to arrange plans for the king and queen’s flight in the spring of 1791, and that June, he secured a type of light carriage known as a Berline to whisk them away to safety.

The plan was to take the king and the royal family to the citadel of Montmedy, about 200 miles from Paris. There, 10,000 men under a royalist general awaited Louis. After he regained his freedom of action, the king planned to launch a royalist counterrevolution. He mistakenly believed that only radicals in Paris supported the revolution, and that the peasants and the broad French masses were on his side. With their support, he planned to restore his kingdom to the way it had been.

Count Axel von Fersen had carriages placed near the Tuileries Palace, where the royal family were kept under guard. At 11:15 PM on the night of June 20th, 1791, the royal children were brought out. Half an hour later, the king and his sister, Madame Elizabeth, followed. It took Marie Antoinette a bit longer to join them. Just as she was about to leave, the Marquis de Lafayette, who was in charge of the palace guard, showed up in a torch-lit carriage. The queen had to hide in the darkness until Lafayette went on his way, before she was able to join the rest of her family.

Louis XVI left a document in the Tuilereis Palace, addressed to the National Assembly. In it, he declared his intention to roll the clock back to the royal concessions granted in 1789, before the French Revolution began. In private correspondence, Marie Antoinette took an even more reactionary line. She declared an intention to return to the old order, without any concessions at all. Von Fersen personally drove the carriage that contained his love and her family to a spot a few miles from Paris. There, Marie Antoinette’s maids waited, along with fresh horses to whisk the royals to safety.

A Last Minute Change of Rides

The escape party split up once the royal fugitives made it out of Paris. The king, queen, and their children took a post route, while von Fersen continued on via a different route. They planned to meet again at Montmedy, but thanks to a change of plans, the reunion never took place. To spirit away the French royal family and their close intimates, von Fersen had arranged for two fast light carriages, that could have made it to Montmedy relatively quickly. However, the royal family would have had to split up and travel in two separate carriages. Louis and Marie Antoinette adamantly refused to accept that.

Instead, the royal couple decided on a different ride at the last minute: a bigger and more conspicuous carriage drawn by six horses, that could accommodate everybody. It turned out to be a bad choice. Louis entered the contraption disguised as the valet of a Russian noblewoman – the governess of the royal children, who pretended to be their mother. Marie Antoinette pretended to be a governess, while her sister acted like a nurse. They made it out of Paris unchallenged, but they soon regretted their last minute carriage change.

The End of a Royal Flight

Unfortunately for the French king and queen, the heavy carriage that carried them was slow. Worse, it had to stop for repairs when its traces broke. The royal couple’s disguises were also flimsy, and they were recognized by many along the route. The royal flight ended at the small town of Varennes, just thirty miles shy of safety. The local postmaster recognized Louis XVI from currency that bore his likeness, and the royal family were arrested and returned to Paris. It was an unmitigated disaster.

Before his flight, the revolutionaries had accepted Louis as a constitutional monarch. They took his assurances that he agreed with them at face value. His flight, coupled with the documents that he and Marie Antoinette had left behind that told them what they really though, changed their minds. Until then, abolition of the monarchy and the declaration of a republic was a fringe position, advocated only by radicals. Now, it quickly gained in popularity. On September 21st, 1792, the monarchy was abolished, and the French Republic was declared.

Axel von Fersen’s role in the royal family’s flight came to light soon enough, and a warrant was issued for his arrest. He fled France, and got in touch with aristocratic French exiles. Led by Louis XVI’s younger brother, the Comte d’Artois, they sought to roll back the French Revolution and restore the Ancien Regime. Von Fersen assisted in their efforts to try and get other European powers to declare war on revolutionary France. In August, 1791, he traveled to Vienna, where he met Holy Roman Emperor Leopold II, Marie Antoinette’s brother, then snuck back into Paris.

Disguised with a big wig and fake mustache, von Fersen claimed to be an envoy from Portugal’s queen. In December, 1791, that got him into the Tuileries Palace, where Louis and Marie Antoinette were now held under tight guard. He pitched them another escape plan. Since the roads were now closely watched, the king should flee through the woods, and then by sea. In the meantime, Marie Antoinette’s love would spirit her and the children away via another route. Louis rejected the plan, because he did not believe it would work. That night, von Fersen saw Marie Antoinette for the last time.

Axel von Fersen left France after Louis XVI shot down his escape plan. His and the French emigres’ efforts to instigate war between Europe’s monarchies and revolutionary France finally bore fruit in the summer of 1792, when war broke out between France and Austria. Rather than help von Fersen’s love and her family, however, it doomed them. That September, the French National Assembly abolished the monarchy and declared a French Republic. Despite all ups and downs, the marriage of Louis XVI and Marie Antoinette lasted until they were literally parted by death. He was tried for treason in December of 1792, convicted, and guillotined a month later. Von Fersen tried to arrange a cavalry raid to snatch his love from Paris, but the generals he pitched the plan to rejected it as hopeless.

Marie Antoinette met the same fate as her husband, and was guillotined in October, 1793. Von Fersen wrote about his reaction: “Though I was prepared for it and expected it since the transfer to the Conciergerie, I was devastated by the reality. I did not have the strength to feel anything … I thought about her constantly, about all the horrible circumstances of her sufferings, of the doubt she might have had about me, my attachment, my interest. That thought tortured me“. Devastated, he returned to Sweden, where he fell into disfavor at court and lost much of his political clout. From his home country, he was forced to stand by helplessly and watch as Revolutionary France, which had killed his love, expanded its reach across Europe.

Marie Antoinette’s Lover Was Lynched by a Street Mob

Marie Antoinette’s lover eventually regained favor at the Swedish court, and was sent as an envoy to France, where he met Napoleon Bonaparte in 1797. Napoleon recalled the count’s efforts against the Revolution and on behalf of the executed French king and queen. As von Fersen recounted, Napoleon: “remarked that the Court of Sweden seemed to take a pleasure in sending agents and ambassadors who were personally disagreeable to every French citizen“. When he returned to Sweden, the count was alarmed by a rise in popular sympathy for revolutionary France. In 1801, he became Marshal of the Realm, Sweden’s highest court official. From that position, he did all he could to halt the spread of revolution to his country. In 1809, a coup deposed Sweden’s King Gustav IV Adolf, and replaced him with his uncle, Charles XIII. A dispute then erupted over who should succeed Charles.

Von Fersen backed a faction that supported the deposed king’s son, Gustav, Prince of Vasa. They opposed the popular Charles August, who was adopted by Charles XIII and became Crown Prince, or heir to the throne. However, Charles fell off his horse in 1810, had a stroke, and died. Rumors spread that he was poisoned, and von Fersen became a prime suspect. On June 10th, as Marshal of the Realm, he rode in a carriage at the head of the Crown Prince’s funeral procession. He was attacked by a mob as soon as he reached Stockholm. The crowd dragged von Fersen out of the carriage, and the funeral’s armed military escort did not intervene. He broke free and ran into a nearby house, but the mob followed and dragged him back out into the street, where it beat him to death.

Delamere Manor – The Five Most Expensive Weddings of All Time

Fersen, Hans Axel – Diary and Correspondence of Count Axel Fersen, Grand Marshal of Sweden, Relating to the Court of France (1902)

Frondorf, Shirley – Death of a Jewish American Princess: The True Story of a Victim on Trial (1988)

Goldstone, Nancy – In the Shadow of the Empress: The Defiant Lives of Maria Theresa, Mother of Marie Antoinette, and Her Daughters (2021)

History Collection – Love and Courtship Through the Eyes of Shakespeare

History Ireland – Camila O’Gorman: A Rose Among the Thorns

Russia Beyond – Dying for Pride: 5 Facts About Pushkin’s Tragic Duel