A Stone-Age, Uncontacted Tribe Murdered the Last Men Who Found their Island 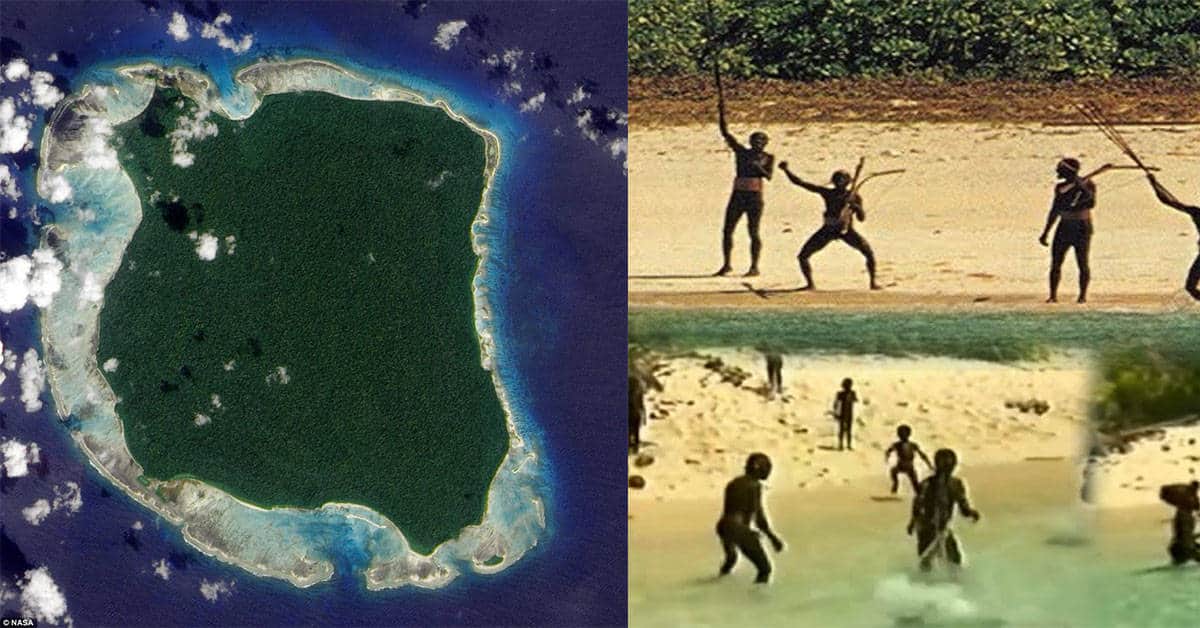 A Stone-Age, Uncontacted Tribe Murdered the Last Men Who Found their Island

Imagine living less than 30 miles from a massive and modern international port city and not having mastery of fire and zero knowledge of life outside of your 20-square mile island. That’s life for the few inhabitants of North Sentinel Island in the Indian Ocean, one of the last true uncontacted civilizations.

An uncontacted civilization isn’t exactly how it sounds as they could have met small bands of “civilized” people, but generally, such civilizations have been met very few times and there is little information on their culture or habits. Most modern governments have adopted a policy of leaving these people be, but that is becoming increasingly difficult in places like the Amazon rainforest.

Just recently, a group of gold miners in Brazil stumbled across some members of an uncontacted tribe gathering eggs near a riverbank. Before long the gold miners were found in a bar bragging about how they slaughtered the tribesmen, threw the bodies in the river, and stole an intricately hand-carved paddle as a trophy.

This is a recent and widely covered story, but there are plenty of massacres that simply go unreported in the depths of the Amazon. Surely some started with violent tribes initiating the attack, but many of the incidents result from poachers or illegal logging activities.

The uncontacted tribe we are looking at deals with much less interference than the Amazon tribes. There are three big reasons for this. First, the simple fact that the tribe is on a small, isolated island helps keep people from simply walking or driving to the Sentinelese.

Secondly, as we will look at more, the Sentinelese are exceptionally violent. In all but one known encounter, the Sentinelese have attacked visitors. Even a documentary crew bearing coconuts and other gifts eventually had to leave after the director took an arrow to the leg. A helicopter checking on the tribe after the tsunami in 2004 was greeted with a swarm of arrows. The thick jungle and protective barrier reefs that can catch boats give even trespassers armed with guns reason not to go to the island.

Lastly, the island itself has little in the way of resources for miners or loggers to bother about. The reefs are likely full of fish and some illegal fishing has occurred, but rarely do fishermen feel the need to leave the rest of the Andaman Islands.

Put all of this together and the Sentinelese are one of the most isolated uncontacted tribes on earth. We have no notion of their language, what they call us or themselves, or how many there are. The most impressive thing we know about them is that they somehow survived the 2004 Indian Ocean Tsunami, one of the deadliest natural disasters ever recorded, despite being in one of the worst geographical location.

North Sentinel Island is sizeable at about 20 square miles and fairly round with protected coral reefs on most sides leading to small beaches that disappear quickly into dense, dark jungle. Viewing the shore from the reefs there is no evidence that the tribe practices deforestation or exerts any meaningful control over the land.

Anthropologists suppose that the Sentinelese have been separated from the other Andaman island tribes for tens of thousands of years, with strong evidence being that the small amounts of recorded language share almost no similarities with the range of aboriginal Andaman languages.

Given the length of separation, the small island could hold a range of unique species of plants and animals. A documentary crew that visited the island brought the Sentinelese a live, tied pig that the natives killed and buried the pig. The tribe hurriedly grabbed the coconuts the crew threw into the shallows. So, the island may not harbor sizeable animal life or the Sentinelese hunted such creatures to extinction long ago. The wide area of the reefs almost guarantees that fishing is a main source of food.

From passed down stories we know that the native tribes of the Andamans knew of the existence but it may have been too far away and too hostile for sustained relations. Once recorded history had been around in India we hear about the Sentinelese being bystanders to the invasions of the Andamans by the Chola Dynasty of southern India.

The conquests at most would have simply stopped by the island to regroup or fish, but certainly, would have brought imposingly large medieval era ships to the shores. Imagine the amount of legends that may have spread through the natives at the sight of such ships.

Contact is unrecorded for the next several centuries until the British began asserting control of India. With the British and the East India company came far more shipping and exploration. During a sail-by survey from the East India Company, surveyors found evidence of a thriving population. In a write-up of the visit in 1771 surveyor John Ritchie said, “if we may judge from the multitude of lights seen upon the shore at night, it is well inhabited.” A British trading vessel of nearly 200 men ran aground on the reefs in the 1770s and the crew had to fight off several furious attacks from the natives before they were rescued with no losses.

Eventually the British exerted more control of the Andamans under the leadership of Maurice Vidal Portman, named officer in charge of the Andamans. Portman used force on occasion but was largely successful at simply befriending the various native tribes, including the previously hostile Onge who now have a stable population to this day.

Portman led a land expedition to North Sentinel Island in 1880 with armed guards. The party went into the depths of the jungle and found many worn footpaths and abandoned villages, but evident signs of habitation; the Sentinelese who were able seemed to have retreated and watched from afar. Portman did find two elderly Sentinelese and four children and took them back to the nearby Port Blair.

Unfortunately, the six captives became quite ill due to any number of possible diseases. Though the British made efforts to be friendly and helpful to integrate and establish friendly contact, they eventually decided to return the children after the elderly couple died from illness. The children may have been sick as well and could have spread disease through the island on their return.

The whole ordeal of kidnapping, death, and disease must have been horrific for the Sentinelese. They may have killed the children out of fear, or cared for them and suffered a wave of disease that we know from other encounters can wipe out 50-75% of an unexposed population. Portman may have had good intentions but this incident may have cemented the hostile nature of the Sentinelese. From Portman’s visits (he came back several times with no major progress and some hostile contact) to today was only a few generations and the terrible stories of the abductions likely still circulate through the tribe today.

Though Portman had good intentions, his lack of tact and understanding of disease made the first real contact quite awful. In the modern era, we have much more understanding of disease vulnerabilities and dealing with hostile tribes. For the most part, governments have been good about leaving obviously isolationist tribes such as the Sentinelese free from contact.

While many people believe that the Sentinelese should be left completely alone with their own unique culture there are others who think integration with the modern world would be the best both for modern humans and the Sentinelese. Those who argue for no contact make an excellent point about the amount of death and destruction present in even friendly integrations.

Even the modern medical system would have difficulties protecting all the Sentinelese from disease. Also, an unfortunate pattern of drug and alcohol abuse is common among integrated native tribes who have not had generations to get used to their presence. The nearby Onge suffer from such addictions despite otherwise integrating well.

On the other side of the argument, we just must imagine how difficult life can be for primitive tribes. No access to modern medicine means that infant and child mortality must be quite high on the island. We also have no idea if the tribe is cannibalistic, a moral outrage that most would surely seek to stop. Going from morals, many religious groups would love to spread their respective beliefs to these people lacking the proper path in life. Finally, imagine the thousands of years of technology these people simply have no comprehension of. Just paper and ink would be amazing in our modern form, imagine an introduction of the internet or even showing a world map and teaching the Sentinelese where they sit in relation to the world.

Since the 1970’s we have made several attempts at friendly contact with the Sentinelese, not necessarily for integration but more to establish repetitive friendly contact to ease the hostile nature of the tribe. A documentary crew from National Geographic broke through the reefs to make contact and brought a pig, many coconuts, and aluminum cookware. The Sentinelese took the coconuts and cookware, but killed and buried the pig and sent a shower of arrows at the film crew. The whole documentary was canceled when an arrow wounded the director in the leg. The warrior who fired the arrow sat down and openly laughed at the ensuing chaos.

Over more than a decade of gift-giving being greeted with hostility, a breakthrough occurred in the ’90s as an unarmed group of Sentinelese met with visiting anthropologists. Language is still a huge barrier, but anthropologists have picked up on nonverbal languages such as peaceful greetings and threatening behavior that signal it’s time to leave.

There have been three shipwrecks on North Sentinel island over the last 40 years. In one case, a stranded ship’s crew watched from the reefs as the Sentinelese gathered weapons and began building ships to get to the wreck. Luckily, bad weather prevented the Sentinelese from getting to the sailors before they were rescued.

In a more unfortunate incident in 2006, two fishermen in a small boat drifted into the reefs after a day of illegal fishing near the island. Their anchor seems to have failed after the duo fell asleep for the night. Fellow fishermen called the coast guard but nothing could be done in time as the Sentinelese rushed the boat and killed the two men. Helicopters that tried to recover the bodies were met by arrow fire and retreated.

Few missions to contact the Sentinelese are planned. They were believed to have been wiped out by the massive 2004 earthquake and tsunami, but helicopter surveys were met with the familiar arrow volleys. The tectonic activity helped the Sentinelese as it lifted the island a bit, adding more area and forming a land bridge to a very small island to the south. Estimates of their population range from only a few dozen to as many as a few hundred, we really have no good way to peer through the thick jungle to find out.

Who knows when the Sentinelese will be integrated with the rest of the world, at some point it seems like an inevitability. Maybe we will learn something from their tribe as well, possibly discover new species and even medicinal plants that the Sentinelese may have been using for millennia. For now, the Sentinelese seem content to be left alone and are violent enough to protect their island from all but large armed groups.

Atlas & Boots – North Sentinel Island: A Timeline of The World’s Most Isolated Tribe

NDTV – What We Know About Sentinelese, Hostile Tribe That Killed an American

The Washington Post – ‘God, I Don’t Want to Die,’ U.S. Missionary Wrote Before He Was Killed By Tribe On Indian Island

History Collection – 20 Islands That Hide Strange Secrets In Their Histories