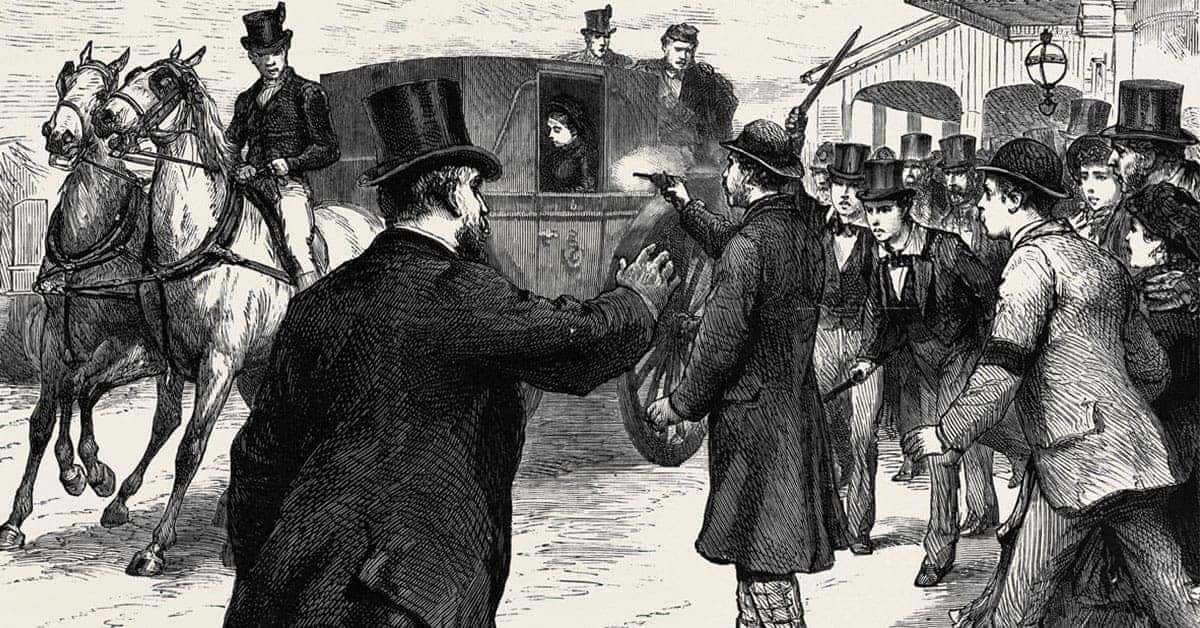 Victoria’s last would be assassin would be the only one to attack outside of London. The Queen was en route to Windsor Castle, the traditional home of the monarch outside of London for almost a thousand years and the longest continuously occupied palace in Europe.

Bordering Windsor Castle is the town of Windsor, home to Eton College, arguably the most prestigious school in the world. Certainly, it was in 1882. As the royal train arrived at Windsor railway station and Queen Victoria moved from the locomotive to her carriage, she was greeted by a crowd of boys from the school.

She later wrote of the incident: “At the same time, there was the sound of what I thought was an explosion from the engine, but in another moment, I saw people rushing about and a man being violently hustled, rushing down the street.”

That man was Roderick Maclean, a mentally ill man who had fired at the Queen. In the commotion, a group of Eton boys had beaten him with their umbrellas and subdued him, whereupon he was arrested. The Guardian newspaper’s report of the time named the “brave, stalwart boys” as two Etonians called Wilson and Robinson, and said that they were “by hustling the would-be regicide, of saving the life of the Queen, met with a tremendous ovation of applause from their college chums when they returned to Eton last night.”

Maclean is thought to have decided to attack the Queen based on her lack of respect for the poetry that he had sent her. His verses had been met with no reply from Victoria herself and instead of a short, rude note from one of her courtesans, prompting the rejected wordsmith to plan his attack. Needless to say, Maclean was insane: he also was obsessed with the color blue, assuming that those who wore the color were doing so purposefully to rile him.

It did not take long for a jury to decide what to do with him once he had been brought to trial. In just a handful of minutes, they declared Maclean insane and sent to an asylum. He would die in Broadmoor, Britain’s most famous insane asylum, in 1921. An interesting footnote to Victoria’s final would-be assassin is that his attack provoked a change in law that has remained in effect until the 1960s. The Trial of Lunatics Act of 1883 was passed in response to the repeated attacks on the life of the Queen and changed the legal status from “not guilty, on grounds of insanity” to “guilty, but insane”, a subtle alteration designed to enhance the stigma on the attacker.