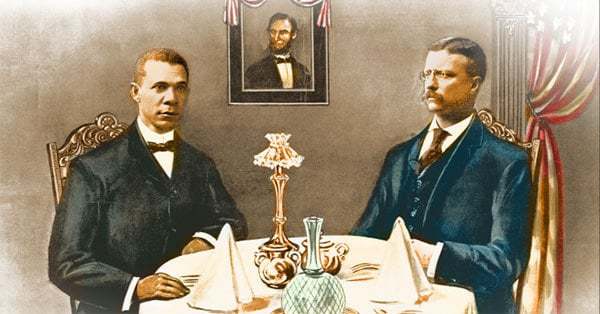 In short order, Washington, a man whom even many segregationists saw as a relatively positive force in African American society, became a societal menace. Political illustrations of the time depicted both Roosevelt and Washington in a variety of ways. Roosevelt was depicted as pandering to black voters while Washington was depicted as a threat to the social order or even as sub-human.

However, there was plenty of support for the dinner as well. Other images from the time depict the two men and their meeting as a positive and historic event, filled with promise and hope for improvement. So inspired was Scott Joplin, famous American composer who popularized the “ragtime” genre, that he wrote an opera, now-lost to history.

The country was clearly split, some seeing the dinner as productive while others were deeply angered. So why did Roosevelt so enthusiastically invite Washington to dinner in the White House, so soon after being inaugurated? After all, Roosevelt was President for only about a month, having ascended to the Presidency after William McKinley died from an assassin’s bullet. Surely, Roosevelt must have known just how much of a political storm his request would cause. Why start a presidency with such a controversy?

Washington and Roosevelt already had a long working relationship with each other. Roosevelt considered him a trusted advisor and a liaison to the African American community. He was impressed with Washington’s life story, a good example of the type of “rugged individualism” Roosevelt admired. Impressed by Washington’s accomplishments, the most famous and successful of which was the foundation and management of the Tuskegee Institute.

The Tuskegee Institute was one the first institutions of adult learning for African Americans in the South. The institute focused on practical education, usually associated with agricultural sciences and industrial trades as well as some social and academic emphases. The goal of the institution was not so much to create tradesmen, but to create teachers of tradesmen. Booker T. Washington fundamentally believed that the best way to create a better life in America for blacks depended not on overt political agitation, but on social and economic self-sufficiency.

Concluding that economic progress was more possible than social equality, Washington’s view split the African American community. Many saw this way of thinking as too great an accommodation. W.E.B. Dubois, perhaps Washington’s most vocal critic, believed that “Mr. Washington represents in Negro thought the old attitude of adjustment and submission”. But Washington knew how deep the bonds of culture and history were, especially in the Deep South. Unlike Dubois, he was born in the South, as a slave, with little access to even the most basic forms of education or social mobility.