The Speech That May Have Saved Teddy Roosevelt’s Life 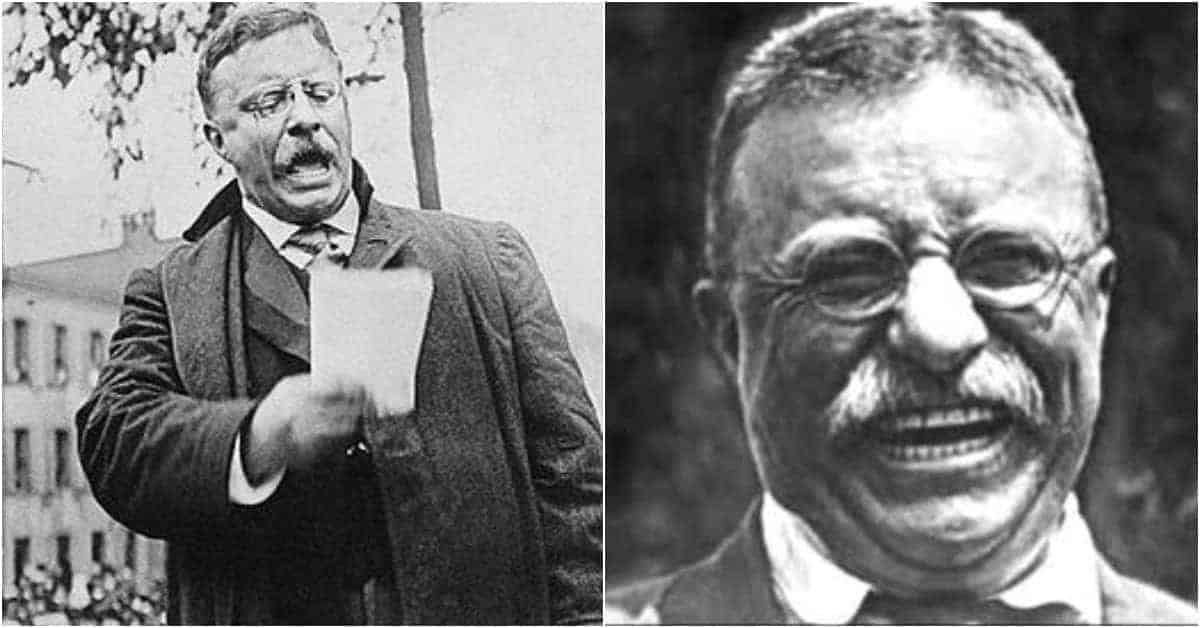 The Speech That May Have Saved Teddy Roosevelt’s Life

While running for an unprecedented third term as U.S. President, Theodore Roosevelt was shot at close range by a would-be assassin. Roosevelt not only survived but the wounded former president pressed ahead with a prearranged speaking engagement in Milwaukee, Wisconsin, that same evening, prior to going to a hospital to receive medical attention. The bullet fired from the gunman’s weapon had passed through a steel-reinforced eyeglass case as well as a fifty-page speech which had been folded in half inside Roosevelt’s overcoat pocket.

The 1912 Presidential race had been a highly confrontational one. Former President Theodore “Teddy” Roosevelt had challenged his friend and chosen successor William Howard Taft for the Republican nomination which had only served to deepen the divide between the progressive and conservative elements among the party. When Roosevelt lost out to Taft for the Republican nomination, he formed the Progressive Party, better known as the Bull Moose Party, and ran as a third-party candidate.

Roosevelt’s actions drew much criticism from his political opponents and also from the media who described him as a “power-hungry traitor willing to break the tradition of two-term presidencies.”

Roosevelt ran on a platform of what he coined as “New Nationalism,” which proposed greater government regulation of the economy to promote social justice and the economic welfare of the underprivileged. Roosevelt had been campaigning hard to win an unprecedented third campaign as President. He had embarked on a grueling schedule which would result in him campaigning in more states than any of his rivals, a remarkable 38 states in total.

On the evening of October 14, 1912, Roosevelt was on the campaign trail in Milwaukee. He had just left the Gilpatrick Hotel shortly after 8 p.m. to travel to a speaking engagement. He got into an open-top car and rose to wave to a crowd of supporters and well-wishers that had gathered to catch a glimpse of him when suddenly a man burst from the crowd and shot Roosevelt from five feet away.

A stenographer on Roosevelts presidential campaign team managed to restrain the gunman. In the ensuing commotion, some members of the crowd began to attack the gunman. Despite having just been shot, Roosevelt remained the calmest man at the scene. He urged the crowd to stop, asking instead that they bring the gunman closer to him so that he could see him. Roosevelt asked the man who he was and why he had shot him but the gunman remained silent. Realizing the futility of his attempts to ascertain the gunman’s motives, Roosevelt said, “turn him over to the police.”

Roosevelt raised his hand to his mouth and coughed three times. Seeing that there was no blood in his hand he concluded that the bullet had not passed through his lungs. Despite the advice of an accompanying doctor to immediately go to a hospital, Roosevelt insisted on pressing ahead with his prearranged speaking engagement. In the inside pocket of Roosevelt’s heavy overcoat was a fifty-page speech folded over with two fresh bullet holes through each page. The bullet had also passed through his steel-reinforced eyeglass case in the same pocket.

The would-be assassin was later revealed to be John Schrank, an unemployed saloonkeeper living in New York. A letter found in Schrank’s pocket which was addressed to the American people described a dream Shrank had where the late President McKinley, (himself shot and killed by an assassin, which had paved the way for Roosevelt’s path to the presidency) sat up from his coffin and pointed at a man dressed in monk’s attire, who Shrank recognized as Teddy Roosevelt, before saying, “this is my murderer – avenge my death.”

Schrank alluded to a political motive to his actions during his trial, where he stated that he “did not intend to kill the citizen Roosevelt,” but that he “intended to kill Theodore Roosevelt, the third-termer.” Roosevelt felt that the media bore some responsibility for his shooting by its inflammatory coverage of the presidential campaign. Roosevelt said that it was a “very natural thing that weak and vicious minds should be inflamed to acts of violence by the kind of awful mendacity and abuse that have been heaped upon me for the last three months by the papers.” Shrank was found guilty, deemed to be insane and was confined for life in a Wisconsin asylum.

Later that evening, when Roosevelt arrived at the auditorium to deliver his speech, he began by asking the audience to “be as quiet as possible,” before telling them, “I don’t know whether you fully understand that I have just been shot.” When a member of the crowd shouted “fake,” Roosevelt unbuttoned his waistcoat to reveal a bloodstained shirt, before defiantly saying that “It takes a lot more than that to kill a bull moose.”

He took his speech out from his overcoat pocket and held it aloft, saying “fortunately I had my manuscript, you see I was going to make a long speech, and there is a bullet—there is where the bullet went through—and it probably saved me from it going into my heart. The bullet is in me now, so that I cannot make a very long speech, but I will try my best.” True to his hardman image, Roosevelt told the shocked audience, “I give you my word, I do not give a rap about being shot, not a rap.”

Roosevelt began his speech and at the end of every page, he dropped it to the floor. A photographer named Samuel Marrs picked up the first page of Roosevelt’s bullet-riddled speech (pictured below) and kept it as a souvenir. (The Smithsonian National Museum of American History later acquired the page from Marr’s nephew in 1974).

After Roosevelt had been speaking for about half an hour, his campaign manager walked on stage and pleaded with him to call a halt to his speech and go to a hospital for medical attention. But Roosevelt waved off his concerns, telling the audience, “My friends are a little more nervous than I am.”

Roosevelt continued to speak for another fifty minutes! He spoke for a total of 84 minutes before eventually relenting and going to a hospital. Later an x-ray revealed that the bullet which had been on an upward trajectory towards his heart had lodged in his fourth rib just below his chest, where it remained for the rest of his life.

While it is clear that the bullet which wounded Roosevelt was slowed by a combination of his heavy overcoat, steel-reinforced eyeglass case, and the folded fifty-page speech, the x-ray proved that the fact the bullet became embedded in his rib prevented it from reaching his heart, and therefore becoming a fatal shot.

Roosevelt’s shooting meant that he was unable to campaign for few weeks in the run-up to the election. He resumed campaigning just a week before election day. His shooting generated a great deal of sympathy for him and also added to his legendary status, but it did not prove to be a decisive factor for the former president on election day. While Roosevelt received the largest ever vote for a third-party candidate, the division in the Republican party was reflected in the election results.

Taft and Roosevelt split the Republican vote between them and Wilson was elected President. The Progressive Party only managed to elect a few candidates to office and Roosevelt knew it was doomed as a political party. However, he used his position as leader of the party as leverage to facilitate his return to the Republican Party. He went on to support the Republican candidate, Charles Evans Hughes in the 1916 presidential race, who narrowly lost out to Wilson for the presidency.

Roosevelt won back the support of the more conservative elements in the Republican Party due to his support for American involvement in World War I and his harsh criticism of President Wilson. Roosevelt was “odds-on favorite” to win the Republican nomination for the 1920 presidential race, but he died in January 1919, just three months after his 60th birthday.