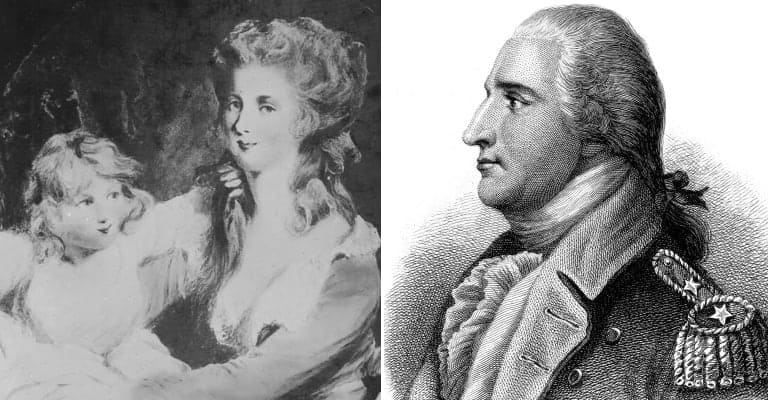 When Benedict Arnold received word on the morning of September 25th, 1780, that John Andre had been arrested, and that incriminating documents and maps of West Point had been found in his possession, he knew the jig was up. That same day, George Washington was scheduled to drop by to visit and inspect the fortifications. Arnold hurriedly told Peggy what had happened, and hoping that Washington would be too chivalrous to take it out on his wife, left her and their infant son behind, and made a dash for the safety of British lines.

Left to fend for herself, Peggy put on a stellar performance to convince everybody that she was just as shocked and surprised as they were by her husband’s treason. She went into histrionics, feigned a nervous breakdown, and started screaming incoherently, insisting that her husband was gone forever, and that somebody was trying to murder her baby. It worked, and Washington and the other Patriots believed that she was as much of a victim of Benedict Arnold’s deceit as they were themselves.

Fearing for her safety, she then traveled to Philadelphia to stay with her family. However, her innocent act began unraveling when authorities found a letter from John Andre to Peggy, written from British-occupied New York, that indicated her complicity in her husband’s treason. Sexism saved her: the authorities, assuming that she was an air-headed woman, incapable of independent thought or agency, reasoned that she simply did whatever her husband told her. That kept them from arresting, trying, and hanging her for treason – there was more than enough evidence for that, had they bothered. They did, however, banish her from Philadelphia, and sent her packing to join her husband in New York.

As to Benedict Arnold, he was made a brigadier general in the British army and he led soldiers against the American side. However, the British never fully warmed to him, and after the war, he was unable to secure a regular commission in the British army. He pursued a variety of ventures, including privateering and land speculation in Canada, before finally settling in London, where he died in 1801.

Peggy and her husband went to London in 1781. She was presented at court to the queen in February of 1782, and was awarded an annuity of 100 pounds – a handsome sum in those days. King George III also presented her with a handsome gift of Â£350 “for her services, which were meritorious“. The royal rewards made her the most highly compensated British spy during the American Revolution. She joined her husband in Canada, and made a brief visit to Philadelphia in 1789, but was given the cold shoulder by the locals. She and Arnold returned to Britain in 1791. After his death in 1801, she had to auction off their home and most of their possessions to pay off his debts. She died of cancer in 1804, and was buried with Benedict Arnold at Battersea.

Smithsonian Magazine, May, 2016 – Why Benedict Arnold Turned Traitor Against the American Revolution