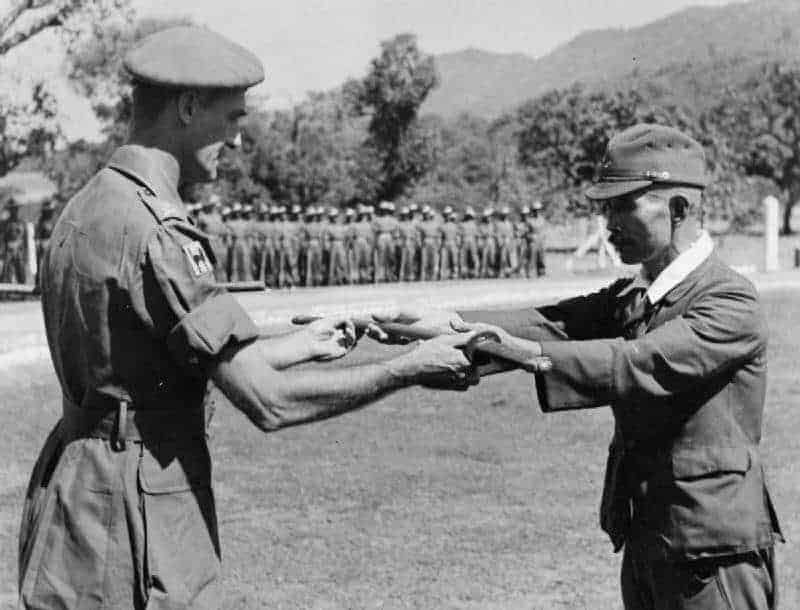 Japan lost World War II and the Allies were justifiably upset about the war. However, their demands for Japanese surrender were quite harsh and it was one of these demands that led to the disappearance of the Honjo Masamune. The Allies demanded that the Japanese hand over all their weapons, including their swords.

Noble families were furious at the idea of having to give up family heirlooms. Many of the families had swords that belonged to their samurai ancestors and had been in their families for generations. At the time, Tokugawa Iemasa was in possession of the Honjo Masamune. He wanted to set a good example and do what he believed was the honorable thing. He gathered up all the family’s swords, including the Hanjo Masamune, and took them to the Mejiro police station in December 1945.

It is reported that the sword was handed over to “Coldy Bimore” but there was no one in the Cavalry, who were there to collect the swords, by that name. After Tokugawa turned over the sword, it completely disappeared. Some reports say that the men who collected the swords did little more than melt them down. Some of the swords were tossed into Tokyo Bay and left to drift away or get swallowed up by the sea.

The melting of swords stopped when a Japanese man explained to General MacArthur that the swords were family heirlooms. The General ordered that the destruction of swords cease immediately. It was decided that the U.S. soldiers who were collecting the swords could take them home. Sword collectors were known to meet returning servicemen on the docks and purchase Japanese swords of tremendous value for a mere fraction of their worth.

That isn’t to say that most of the swords confiscated by the Allies were of significant quality or historical value. Many were machine-made and others, despite being old, were only of average quality and did not have a great deal of value. It was the family swords and the old samurai swords that had been passed down for years and still in the original samurai fittings that had great value and are lost Japanese treasures.

The fate of the Honjo Masamune is not known. It could have been taken home by an Allied soldier and still kept by someone who does not know its value, or what the Tokugawa family is willing to pay to get it back. It could have been melted down or sold to a collector who does not want to give it back to Japan. There are some who believe that the sword might have been hidden away and is still in Japan. There is still hope for finding the Honjo Masamune; in 2013 a sword was brought to the Kyoto National Museum for appraisal. The next year the Museum confirmed that the sword was made by Masamune, and is known as the Shimazu Masamune. Only time will tell if the priceless relic will surface again.

The Daily Beast – Is This Famous Samurai Sword Missing In America?

Epic Writes – Who the Hell is Coldy Bimore: My Small Part in the Search for the Honjo Masamune

All That’s Interesting – Masamune, The 13th-Century Japanese Swordsmith Who Was The Stuff Of Legends