Strength and Honor: 7 of the Greatest Samurai Battles in History 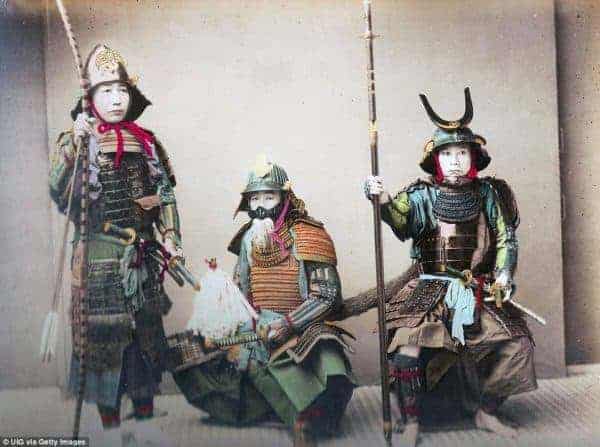 Strength and Honor: 7 of the Greatest Samurai Battles in History

There were five battles of Kawanakajima between the Takeda clan of the Kai Province and the Murakami and Nagao clans of the Echigo Province. The Takeda clan was led by Takeda Shingen and the Murakami and Nagao clans were led by Uesugi Kenshin. The battles of the Kawanakajima began in 1553 as Shingen was looking to expand his territory.

Kawanakajima was just 60 kilometers from Kenshin’s home castle and occupying the territory would be a key point to block southern movement by Kenshin. The Kawanakajima plain would be of huge benefit for both daimyo’s as it would be a good starting point for an invasion of Echigo by Shingen or a strike south by Kenshin. Shingen wanted access to the ocean but he had made peace with all the regions south, east and west of him, his only way to get ocean access was through Kenshin’s northern territory. Shingen also saw a benefit to keeping his generals busy with war so that they would not turn on him.

The first battle occurred in June of 1553. The two armies met and clashed for months, but with neither side assured of victory both warlords withdrew. In 1555, Shingen advanced and the two armies took defensive positions on either side of a river, neither making an offensive move for four months. Then both withdrew. In 1557, Shingen tried again and crossed the river and tried to take over fortresses and castles to surround Kenshin’s army. Kenshin counterattacked and Shingen retreated.

In 1561, the Battle of Kwanakajima took place and was the largest and bloodiest war to occur on the plain. This time Kenshin took a force of 18,000 across the plain to attack Shingen’s Kaizu Castle. Shingen immediately responded and rallied a force of 20,000 men to meet Kenshin. The battle raged and both sides took massive casualties. Shingen lost 62% of his forces including his best generals while Kenshin lost 72%. Both sides withdrew and the battle was largely seen as a draw. In 1564, Shingen tried one last time with both armies meeting in defensive positions on either side of the Sai for 60 days before both sides withdrew.

The Battle of Nagashino occurred in 1575 near the Nagashino Castle in the Mikawa Province. It began when Takeda Katsuyori attacked the castle. Takeda Katsuyori was the son of Takeda Shingen and was looking to make his own name for himself by expanding his territory. The lands to the south were owned by Tokugawa Ieyasu and if taken would give Takeda control of the main avenue of approach to the capital of Kyoto.

Tokugawa Ieyasu and Takeda had clashed before but allied with Tokugawa was Oda Nobunaga. Oda Nobunaga was the nominal hegemon of Japan and he was known as an innovator not only in military tactics but firearms as well. It was only because Takeda had received an offer from a high-ranking Tokugawa official to open the gates of Tokugawa’s capital to the Takeda army, that he decided to make a move. If Takeda could take the capital he would isolate Tokugawa from Nobunaga, and he would be able to defeat Tokugawa.

With 15,000 men, Takeda set out. Before he could reach the castle, the traitor was discovered and executed. With no way to get into the capital, Takeda and his army attacked Yoshida Castle instead. Tokugawa had anticipated the move and left 6,000 men to guard the castle. To avoid a siege against an armed garrison, Takeda headed for Nagashino Castle which only had 500 defenders. Takeda fought for several days but stood down after heavy casualties, deciding instead to starve out the defenders. Tokugawa and Nobunaga sent troops and an army totaling 38,000 reached the castle.

Takeda had brought his cavalry which was feared by both Tokugawa and Nobunaga who had suffered defeats against it. This time however, Nobunaga used firearms and was able to defeat the cavalry and the samurai were able to defeat the Takeda warriors in single combat. By the end of the battle Takeda had lost as many as 10,000 men as Nobunaga pursued his army even as they tried to flee.

The Battle of Mikata ga Hara is remembered as one of the most famous battles of military leader Takeda Shingen. In October of 1572, Takeda Shingen was looking to expand territory. He had already made alliances with his eastern rivals and he wanted the snow to melt before he headed north against Kenshin, so he took an army of 30,000 south into the Totomi Province. He quickly captured Yoshida Castle and Futamata castle.

Tokugawa Ieyasu was not about to let Takeda’s advance stand and raised 8,000 men at Hamamatsu Castle along with 3,000 reinforcements from Oda Nobunaga. Despite the defense rallied by Tokugawa, Takeda did not want to attack the warlord or Hamamatsu. Takeda wanted to save his army to defeat Nobunaga and make an attack on Kyoto. Despite the fact that Takeda had no desire to fight Tokugawa, Tokugawa refused to let him pass through unhindered. So against the advice of his own generals and those of Nobunaga, Tokugawa drew his forces on the Mikatagahara plain.

Takeda had the superiority of numbers but Tokugawa had firearms. However, the peasant stone throwers and shooters were no match for Takeda’s cavalry charge. The mounted troops overran the gunners and broke through. Shingen then withdrew his troops from battle and allowed them to rest before bringing forth a new set of horseman for another cavalry charge. The second charge was flanked by the whole Takeda army which put the Tokugawa forces into full retreat.

Many brave samurai gave their lives in an attempt to delay the advance of Takeda in order to allow Tokugawa to retreat back to Hamamatsu Castle. Tokugawa kept the castle gates open and the braziers lit in order to guide his retreating forces to safety. Takeda’s forces were afraid of a trap and did not march on the castle. Returning Tokugawa troops attacked the camp and threw the vanguard of the Takeda army into confusion. After the attack Takeda had no idea of the strength of Tokugawa and decided to retreat and make an attack on the castle the following year.

In 1570, Oda Nobunaga and Tokugawa Ieyasu put together a force of 28,000. This force was then split to attack Azai’s Odani castle and Asakura’s Yokoyama castle. Azai and Asakura gathered a force of 18,000 and met the Oda and Tokugawa armies as they were leaving the castles. Both armies gathered on each bank of the shallow Ane River. The armies then met in the middle and a huge hand-to-hand melee in the middle of the waters occurred.

Nobunaga’s forces first faced off against the Azai upstream while Tokugawa’s forces fought the Askaura downstream. When Tokugawa unleased his second division to attack the Asakura’s left flank, the other army knew they had been defeated and began to retreat. When the Tokugawa forces had defeated the Asakura, they turned and attacked the Azai in their right flight. Both the Azai and Asakura forces were defeated.

There are no detailed sources about the battle. It was known that Nobunaga used 500 arquebusiers in the battle and he was known for using firearms. Death toll estimates for the Azai and Askaura have been estimated at over 4,000 which historians believe is likely due to ta fact that armies of that size often had more peasant footman than samurai. Therefore, while the samurai death toll may not have been as high it is likely that many of the common footmen were killed.

The Battle of Shiroyama is considered to be the last stand of the samurai under Saigo Takamori as they fought against Imperial Japanese Army troops. It occurred on September 24, 1877 in Kagohima Japan as part of the Satsuma Rebellion. The samurai had already been defeated at the Siege of Kumamoto Castle and the surviving forces that were loyal to Saigo Takamori fled to Satsuma.

Once in Satsuma the few remaining forces took the hill of Shiroyama which overlooked Kagoshima on September 1, 1877. Saigo Takamori only had about 500 samurai left from his force of 20,000 that had attacked Kumamoto six weeks prior. By contrast the Imperial Japanese Army troops that began arriving at Shiroyama were over 30,000. They were under the command of General Yamagata Aritomo.

Despite vastly outnumbering the weary samurai troops, Yamagata took his time and built fortifications that surrounded Saigo in order to ensure that none of the troops would be able to break out. Five warships were also called upon to bombard the small contingent of troops in order to wear down their defenses. Saigo had only limited musket support with which to defend his position and they melted down statues in order to make bullets.

After bombarding the rebels all night, Yamagata’s men attacked. The samurai charged the lines of the Imperial Army which had not been trained in close-quarter fighting. The samurai turned the organized army line into completely disarray and for a short time the 500-samurai held their own against the thousands of troops against them. But eventually the sheer numbers of the imperial army took their toll. Saigo was mortally wounded and was carried by Beppu Shinsuke to a place to end his life. Beppu cut off Saigo’s head and hid it so that the enemy would not find it. Afterward Beppu and the few remaining men charged the Imperial lines and met their deaths.

Oda Nobunaga goes down as one of the greatest warlords in Japanese history. It was the Battle of Okehazama that established him as one of the main warlords of the Sengoku period. In 1560, Imagawa Yoshimoto took an army of 25,000 men and marched toward Kyoto. In order to get to Kyoto he had to go through Oda territory in the Owari province. On his way, he took the fortresses of Washizu and Marune and then set up camp in Dengaku-hazama. The large army felt they would be protected inside the large wooded gorge.

When Oda received word of the army in his territory he took his own forces to the Zensho-ji temple which was a short distance from the gorge. Oda Nobunaga was heavily outnumbered with a force of only 2,000 to 3,000 men. There was no way that Oda could hold out at the temple if Imagawa attacked nor could his army win with a frontal attack.

In order to get the upper hand, Oda Nobunaga created a dummy army with enough banners to make Imagawa think that Oda not only had a large army but that it was stationed there. However, Oda took his main force and then made his way through the forests of the gorge to come out at the rear of the Imagawa army from the north. The movement of the Oda’s army was concealed by a large thunderstorm and the Imagawa army were not expecting any sort of attack.

When Oda and his men emerged from the woods, the larger army lost all discipline in the surprise of the attack. In the confusion Imagawa Yoshimoto’s tent was left undefended. He emerged from the tent to tell his men to return to their posts (he believed they had been drinking and causing a ruckus) only to find the battle raging about him. Imagawa Yoshimoto was quickly killed along with all but two other senior officers of the army. With no leadership, the rest of the Imagawa army switch sides and joined Oda. Among the men who switched sides was Matsudaira Motoyasu who would later become Tokugawa Ieyasu and be a loyal ally to Nobunaga for the rest of the warlord’s life.