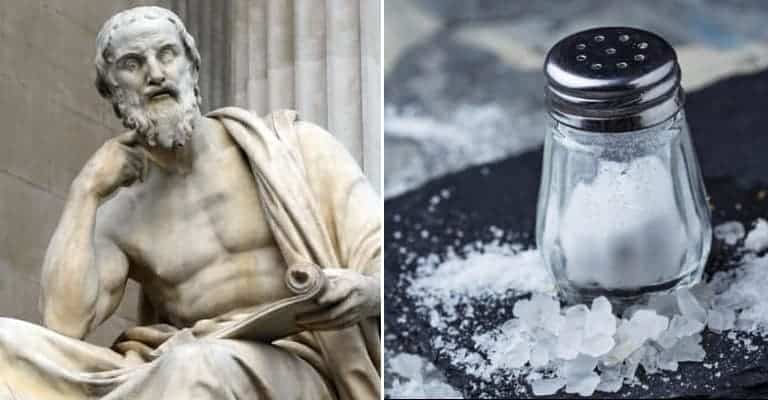 Salt was so valuable around the 6th Century B.C. that the civilization which was rich in salt was able to trade it for gold. Amoles, which is what the citizens of Abyssinia called salt were extremely rich in salt and could exchange it for other amazing riches, such as gold. The salt from Abyssinia came from rock slabs which were about ten inches long and up to two inches thick. Abyssinia would often trade their salt with areas such as central Africa.

Salt in the Ancient World

As stated before, salt was vital in ancient civilizations. Salt helped the ancient world grow. In fact, in the early Roman Republic, one of the main reason Romans started to build roads in their area was to make transporting salt to the Roman capital easier. Beginning in the late Roman Republic and lasting until the end of the Middle Ages, people traveled on salt roads to the Germanic tribes. Camels would bring the salt from the Sahara four hundred miles to Sahel where the salt was for slaves.

Salt was also crucial to the Chinese. Salt has played an essential role in not only the growth of China but even its economic and political history. When the Chinese government realized all the things that salt could do, they started to create salt policies. This led the residents of China to wonder if the salt should have any part in the government. On top of this, the mineral was also an important part of Chinese culture. In fact, salt is one of the seven necessities of life in China.

The American History of Salt

When the Europeans and the Native Americans first met each other in America, the Europeans learned that the Native Americans would harvest sea salt on St. Maarten. Salt continued to be a part of the American way of life as it began to motivate the pioneers in American history. Because some of the American colonists received their salt from Great Britain, the motherland decided to stop production of salt during the American Revolution. The British felt that if they withheld salt from the colonists, they would not rebel because salt was considered to be incredibly precious to the colonists.

The first patent that the king of Great Britain gave to American colonists had to do with salt. The colonists, Samuel Winslow who was from the Massachusetts Bay Colony, were given the right to make salt with his own method for a decade. When Lewis and Clark traveled through the Louisiana Purchase territory in the early 1800s, they kept salt on their minds. They wanted to know if there would be any salt around the new region for trade and other areas in life.

The 1795 Land Act wanted to prevent monopolies, so it included a provision for salt reservations. However, this was not the only act in history which included salt. Another was a treaty between the state of New York and the Iroquois’ Onondaga tribe. This treaty and act were put in place because the state of New York has always had salt as a considerable part of their history and economy. On top of this, the city of Syracuse, which is located in New York, is known as Salt City.

Then there is the Erie Canal, which has gone down in history as “the ditch that salt built” because, in the 1800s, the canal was mainly used to transport salt. From about the late 1700s until the mid-1800s, salt was produced by many states in the United States of America. These states include Kentucky, Indiana, Illinois, Michigan, Ohio, Pennsylvania, Missouri, and Louisiana. During the 18th and 19th centuries, most states in the US had salt mining. In fact, many still do salt mining, such as Louisiana, Ohio, New York, and Kansas.

On top of being a part of the trade and helping to build the population of the United States of America, salt has also been important in wars. Salt had a crucial role in the American Civil War. During the war, both the Confederate and Union forces know how important salt was to the country. Therefore, they tried to beat the other to gain the areas where there were salt mines. For example, the Union forces fought a 36-hour battle to capture Saltville, Virginia, because of its salt plant.

Salt did not just play an important part during the Civil War. It actually had an important part in wars before the mid-1800s. During the American Revolution, British forces would work to capture the salt supply of others. For example, in 1777, General Washington’s salt supply was taken by British Lord Howe, who was beyond ecstatic that he was able to capture the salt supply of General Washington successfully. Furthermore, it is reported that troops during the American Revolution died because they did not have enough salt to treat their wounds.

These interesting facts are only a small bit of the history behind salt; there are so many more archives of this additive as its lifespan has been around for centuries. As stated before, salt has been around for thousands of years as salt started to form once the mineral was able to make it. From there, it did not take long for civilizations to catch on to the importance of salt. Throughout history, salt has not only been sprinkled on food to help make it taste better, but it has also been used for trade and healing wounds.

“The Fascinating Early History of Salt.” Today I Found Out