A Life Of Action: The Story Of Medal Of Honor Recipient Louis Carpenter 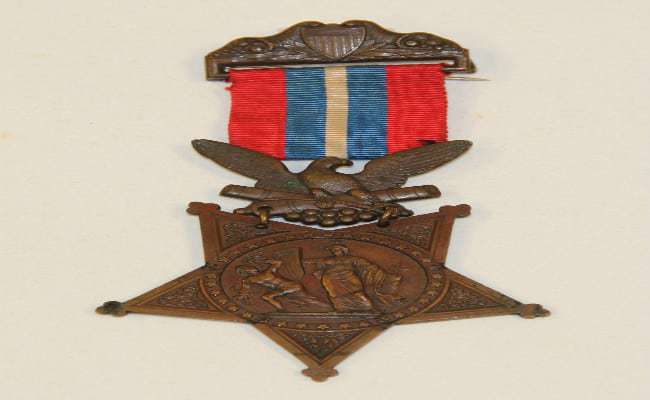 A Life Of Action: The Story Of Medal Of Honor Recipient Louis Carpenter

After serving almost 40 years of his life in military service to his country, Louis Carpenter deserves recognition. He was a United States Army brigadier general, and he received a Medal of Honor for his skilled and courageous actions in the American Indian Wars.

Born into a Family of American Service Members

Carpenter came from patriotic stock, as he was a direct descendant of the notable immigrant Samuel Carpenter, who traveled from Barbados to America in 1683 to become Deputy Governor of Colonial Pennsylvania. Beyond that, he was the eldest son of eight children in Glassboro, New Jersey. In 1843, his family moved to Philadelphia and regularly attended Trinity Episcopal Church. Carpenter himself received his education at A. B. Central High School, before moving on to Student University of Pennsylvania in 1859.

His younger brother, James Edward Carpenter, would also serve in the Union army. He started as a private in the Eighth Pennsylvania Cavalry and went on to be commissioned as a Second Lieutenant. He later became a First Lieutenant, Captain then a Brevet Major of Volunteers. It appears loyalty to one’s country ran in the blood of the Carpenter family as a whole, through generations.

The Call to Enter the Military Upends His Education

During his junior year at Dickinson College in 1861, Carpenter dropped out of school and joined the “The Fighting Sixth” Cavalry Regiment, becoming a private in the Union Army, which would later be renamed the Army of the Potomac. Trained as an infantry soldier during the American Civil War, Carpenter was soon capable of riding a horse to the battlefield and acting as a mounted scout.

As a “horse soldier,” he and others like him had a steep learning curve, which frustrated Carpenter to no end during the first year of the conflict. He decided to participate in the Peninsula Campaign, chasing the Jeb Stuart’s Cavalry and completely going around the Union Army, causing great psychological concerns to the Union cavalry commanders and men.

Unfortunately, the “horse soldiers” were only a mere second best compared to the dashing Confederate cavalry soldiers. It took some experience and practice, but slowly Carpenter and the others became cavalry troopers under new guided leadership and tactical training. By the end of the Seven Days Battles, Carpenter had demonstrated his abilities enough to be promoted to Second Lieutenant in the regular Army.

During the Battle of Brandy Station in 1863, Carpenter and his men learned they were just as capable as their Southern counterparts, the Confederates, led by Major General J.E.B. Stuart. And when Carpenter found himself and his unit involved in the Battle of Fairfield, he stood against two of the crack brigades of Stuart’s cavalry. The 6th Cavalry’s stand was considered one of the most stalwart in its history, helping to influence the outcome of the battles being fought around Gettysburg. 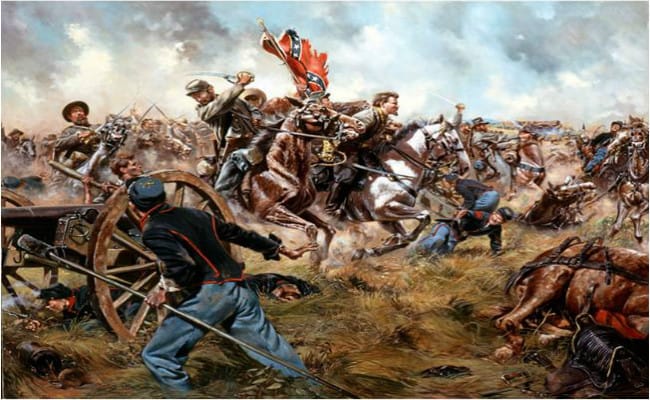 While the 6th Cavalry regiment was divided into smaller groups, it fought so well that its squadrons were considered just as debilitating as an advance of a large body of troops. The senior officer of those brigades was later criticized severely for being delayed by such an inferior force, for had the 6th Cavalry regiment not made their stand, the two brigades of Virginians could have caused serious problems to the Union rear areas.

Lieutenant Carpenter, of Troop H, was one of the three officers of the 6th U.S. Cavalry to escape from the deadly Fairfield battle.

Throughout the years of the Civil War, Carpenter served in at least 14 campaigns and over 150 battles related to them. Starting from the 1861 Peninsula Campaign, he was also a part of the 1862 Maryland Campaign, Campaign at Fredericksburg, the 1863 Gettysburg Campaign, Chancellorsville (in Stoneman’s raid to the rear of Lee’s army), the 1864 The Wilderness and in the final battles in Kentucky and South-West Virginia.

Helping to Solve Civil Issues Among the Military

It should be addressed that Carpenter saw fit to eradicate race issues among troops and solidify everyone together as one cohesive unit against the enemy. After Carpenter became the executive officer of the 5th USCC, he was relegated to training and getting the African-American recruits ready for combat. After all, basic drill, weapons training and conditioning helped build confidence and preparedness.

However, Carpenter came across another serious problem. Non-commissioned officers were to be chosen from the ranks, yet he was faced with an entire regiment of recent ex-slaves who weren’t literate enough to handle the tasks assigned to sergeants. Carpenter’s solution came swiftly, though, and was thankfully granted by his superiors. He placed literate, white, non-commissioned officers among the “colored sergeants,” to combine them with literate leaders who could help teach a literacy program for African-American NCOs. This idea corrected the problem in time, and gave Carpenter a nod towards the attention of his watchful officials.

Despite this initial headway, it slowly became apparent that some white officers promoted from the ranks were “unsuited” to command “colored troops.” Even through efforts of training by Carpenter and other officials, attrition was the only real solution for these junior officers.

Carpenter’s progressive mindset led him to greater heights throughout his career as well. His disregard for any racial intolerance made him a shoe-in for joining up with the 10th Cavalry-Regiment of Buffalo Soldiers during the Indian Wars. He accepted the role of Captain in the Regular Army, serving over 13 years of near-constant conflict with the Native Americans in the Southwest. 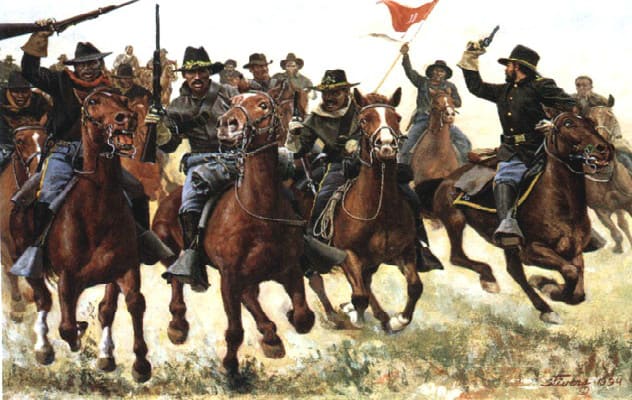 It was noted that Carpenter’s men fully respected him, a notion which only proved true when it was discovered that his company had the lowest documented desertion rate of the Regular Army during his charge. Known for being fair, firm, and consistent, Carpenter was able to understand the hardships and racial bigotry his men faced. After his service with the 10th Regiment had met its end, he campaigned and defended what his Buffalo Soldiers had done, and what they were capable of doing in the future. His ability to train and lead was remarkable, setting a standard for all of the surrounding cavalry units.

Overall, during his military career, Carpenter had earned more than just the Medal of Honor during the Indian campaigns. He was also awarded a Brevet promotion for bravery and was mentioned in dispatches during the Civil War, as well as having another Brevet promotion recognizing his work in the Indian Wars.