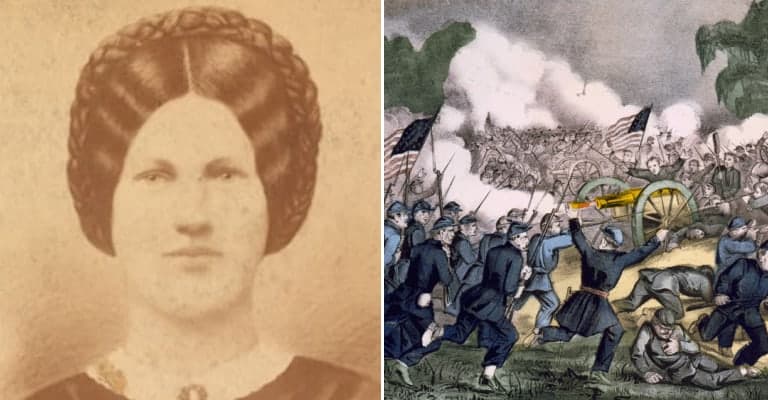 When the battle of Gettysburg started on July 1, 1863, over 150 bullets hit the house where Jennie Wade was staying. However, it was not until the third and last day of the battle where tragedy would strike. Jennie Wade was born Mary Virginia Wade in May of 1843 in Gettysburg, Pennsylvania. Most people called Mary “Jennie” which was short for Virginia. At birth, she joined her parents, Mary Ann and James, and her older sister, Georgia Anna, in their home on Breckenridge Street. Her mother was a homemaker, and her father worked for a man named Johnston Hastings Skelly.

While she was a child, Jennie’s father had a mental breakdown and was committed to an asylum. Therefore, it was just Jennie’s mother who was in charge of making sure the family could survive, which included not only Georgia and Jennie but also their three younger brothers, John James, Samuel, and Harry. The only job Jennie’s mother could pick up during the mid-1800s was working as a seamstress. So, Jennie’s mother started to take on all the tasks she could as a sewer. Eventually, both Georgia and Jennie were old enough to work and learned their mother’s trade.

While Jennie was a child, she became friends with her father’s employer’s son who shared the same name as him, Johnston Skelly, but everyone called him Jack. As Jack and Jennie grew, they started to see each other differently. Soon, Skelly asked Jennie’s mother if he could court her. At the same time, Georgia was getting married and about to move out. However, Georgia would not be going far from home. As soon as Georgia Wade became Georgia McClellan, she moved to a different house on Gettysburg, located at 528 Baltimore Street, Gettysburg, Pennsylvania.

The Civil War started on April 12, 1861, and raged on until May 9th, 1865. By its end, the Civil War would claim the lives of hundreds of thousands of soldiers. Skelly, whom many believed was Jennie’s fiancÃ© by the start of the Civil War, decided to join the Union Army at the end of April in 1861. Skelly, along with one of Jennie’s other childhood friends, Wesley Culp, went on to join the ranks of the Union Army. Skelly became a part of the 87th Pennsylvania Infantry.

For the first part of the Civil War, the Wade and McClellan families had very little to worry about, other than their friends and loved ones who were battling in the war. Jack Skelly, under the work of General Robert E. Lee, was fighting in the Second Battle of Winchester in Virginia. The battle started on June 13th, and Skelly was doing well until he became injured on June 15th. At the Winchester hospital, where Skelly was trying to recover, he saw his childhood friend, Culp.

Upon meeting Culp at the Winchester hospital, Jack wrote a letter to Jennie and gave it to Culp. Jack then asked Culp if he would hand-deliver it to Jennie if he ever got close enough to Gettysburg and was able to. Culp took the letter, put it in his pocket, and told Jack that he would do so if he could. Of course, at the time, neither Jack or Culp knew that there would be a collision at Gettysburg, exactly where Jennie and her family were living.

It was only a couple weeks after seeing Jack when Culp got back to the Gettysburg area. Even though the regiment Culp was a part of was preparing for what would become the bloodiest battle of the Civil War, Culp was able to escape for a while. He immediately snuck over to see his sisters and make sure his family was okay. During their conversation, Culp mentioned that he had a letter he needed to give to someone. However, Culp did not specify to whom or what the letter explained.

Culp had told his good friend Jack, that he would hand-deliver the letter to Jennie and that is what Culp was bound and determined to do. No one is sure whether he was able to deliver the message to Jennie. What we do know that is that just days later, Culp would be in the middle of the Gettysburg Battle. The town of Gettysburg heard the first shots of the Battle of Gettysburg on July 1, 1863. On July 3, Culp was around his Uncle Henry’s farm trying to fight off Confederate forces from an area known as Culp’s Hill.

While trying to secure his family’s land from the Confederate soldiers, Culp was wounded and quickly died from his wounds. No one identified Culp’s body as chances are, like so many other soldiers, he or she threw Culp’s body in a large grave made for dozens of soldiers who also died in battle on that day. Not too far from where Culp was killed, on that same day, Confederate forces made their way to where the Wade and McClellan families were staying, which was at Georgia’s house.

Jennie, her mother, and her three brothers left their family home on Breckenridge Street to go to the McClellan’s house on Baltimore Street. However, the Wades did not leave their home because they thought it would be safer from the fighting going on around them. They went to the McClellan home because they wanted to be there when Georgia gave birth to her first child, a boy named Lewis Kenneth McClellan, who was born right before the Battle of Gettysburg started. The family stayed with Georgia to help with baby Lewis.

The Death of Jennie Wade

Once the Battle of Gettysburg broke out, the Wade and McClellan families became busy not only helping Georgia with baby Lewis but also helping the Union soldiers in their area. Like they did everywhere, Union soldiers would stop at the homes they were near. There, they would be able to get some food and water. Jennie and her mother would often give them some bread and water. Every morning, Jennie would go into the kitchen to make the bread from the dough she kneaded the day before and knead more dough.

A bit before 8:00 in the morning on July 3, 1863, Jennie went into the kitchen to start baking more bread and knead more dough for the next day. By this point, the family had been surrounded by gunfire as there were over 150 holes from bullets all around the McClellan house. It was 8:30 a.m. when Jennie was kneading the dough, and one of the soldiers shot a weapon. The mini ball went through the two doors and hit Jennie in the shoulder. The bullet pierced her heart and stopped in her corset.

Jennie’s mother heard her fall to the floor and screamed. She then went to Jennie’s sister in the next room and told her that her sister had been shot and was dead. At the same time, two Union soldiers who were upstairs in the house came down the stairs to see why they heard screaming. Jennie’s mother brought them to Jennie and told them that a bullet killed her. They then wrapped Jennie in a blanket and took her down to the cellar where she stayed until they were able to bury her.

The next day, on the Fourth of July, Jennie’s mother decided to carry on with the good deed that Jennie always did for the Union soldiers. That morning, she went into the kitchen and made over a dozen loaves of bread from the dough Jennie was kneading when she was shot dead. About a week later, Skelly, who had no idea about Jennie’s death during the Battle of Gettysburg died from his wounds. While we have no idea if Skelly’s letter ever got to Jennie, we do know Jennie’s apron pocket held a picture of Skelly.

Both Jack Skelly and Jennie Wade are buried next to each other at Evergreen Cemetery in Gettysburg. Residents of Gettysburg raised money to place a monument at Jennie’s grave. An American Flag is part of this monument and is always in place. The only other woman to hold an honor like this is Betsy Ross. Jennie’s death made her the single woman and civilian to die during the Battle of Gettysburg. Today, you can step back in time to see the home just as Jennie Wade saw it as she lived.

Where Did We Find This Stuff? Here are our sources:

7 Facts About the Battle of Gettysburg. Christopher Klein. History Channel.