Legacy of Carlos Hathcock: American Sniper During the Vietnam War Took on These Infamous Enemies and Shocked the World 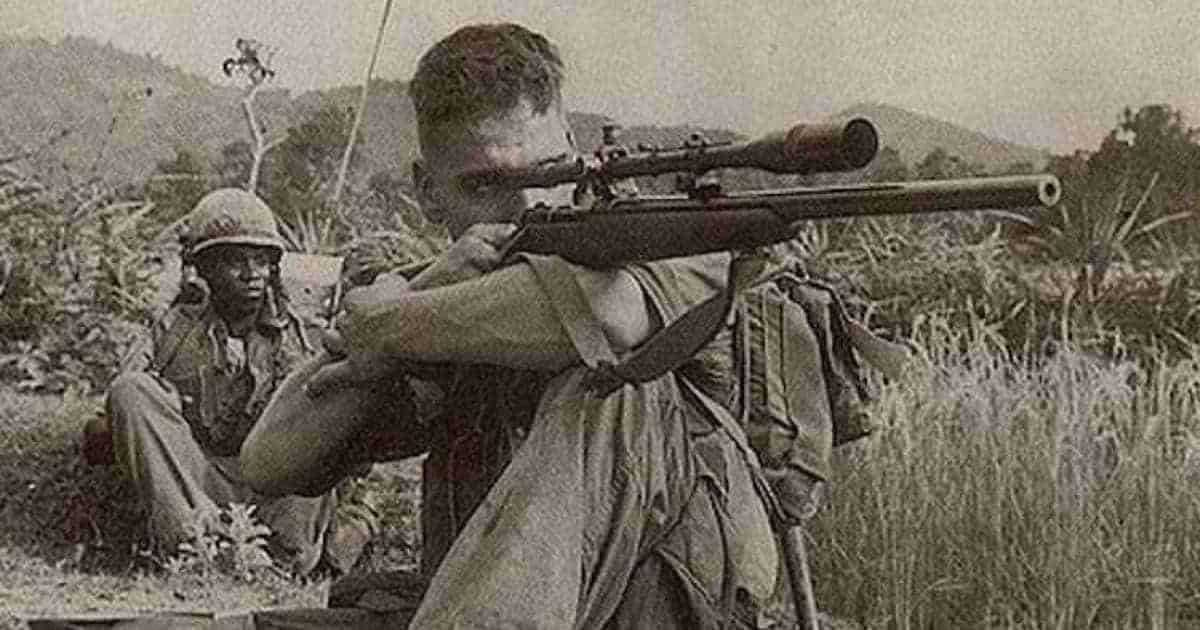 Legacy of Carlos Hathcock: American Sniper During the Vietnam War Took on These Infamous Enemies and Shocked the World

Who is Carlos Hathcock? Simply put, he is one of the Marine Corps most revered figures. Today, he is most famously known for holding the longest-distance kill record of any sniper for decades following the Vietnam War. Read on to find out more about where he came from, his stories, and what happened after his time in the Vietnam War ended. Ladies and gentleman, Carlos Hathcock: ‘the man, the myth, the legend’.

Born 1942 in Little Rock Arkansas, Carlos Hathcock II later became known as the “White Feather”. From a young child, Hathcock states he always dreamt of being a Marine. He frequently went out shooting with a .22-caliber J.C. Higgins single-shot rifle while visiting relatives in Mississippi. He said he enjoyed pretending to be a soldier fighting imaginary Japanese figures. Naturally in 1959, on his seventeenth birthday, Carlos thus enlisted in the United States Marine Corps.

In 1966, the military deployed Hathcock to Vietnam. He started as a military policeman but his platoon later raised him to the position of a sniper. During the war, as a sniper, Hathcock had ninety-three confirmed kills of Viet Cong and North Vietnamese Army personnel. In order to have your kills confirmed during this time, an officer had to be there to confirm the kill. Resultantly, because of the difficulty in achieving this, Hathcock himself estimates his kill figure to be closer to three or four-hundred enemy personnel.

While the North Vietnamese Army typically rewarded anywhere between eight dollars and two thousand dollars for capturing or killing US snipers, Carlos Hathcock was a different story. Owing to his success in killing so many of their men, the North Vietnamese Army placed a thirty-thousand-dollar bounty on his head. Historians believe this bounty to be the highest number the Vietnamese ever offered for a single man.

In combat, Hathcock earned the nickname “White Feather”. The Vietcong and North Vietnamese Army called him this because of the white feather he wore on his bush hat to supposedly entice the North Vietnamese to spot him sooner. His legend was so renowned that other marines took it upon themselves to don white feathers in order to mislead the enemy. They suspected the impact of Hathcock’s death would be catastrophic for morale and thus sought to confuse counter-snipers.

Carlos Hathcock – and the stories he told – led him to become a legendary figure in the U.S. Marine Corps. By the end of the War, Carlos Hathcock ranked as Gunnery Sergeant of the first Marine Division unit. This is the seventh enlisted rank in the Marine Corps.

A selection of Hathcock’s best stories

Hathcock had several confrontations with North Vietnamese snipers. The most famous of these involved a showdown with a sniper known only as “The Cobra”. Hathcock and his spotter, John Burke, stalked the Cobra in a jungle southwest of Da Nang. The US Army believed the Vietnamese sent the Cobra specifically to kill particular enemy soldiers. Naturally, the Cobra wanted to receive the largest bounty of them all and execute Hathcock himself. Fortunately, while in the jungle Hathcock saw a flash of light reflect off the enemy sniper’s scope in the bushes. Of course, he fired immediately. Both could have killed one another simultaneously, but Hathcock’s speed and skill gave him an advantage. His aim was so precise that he shot through the sniper’s own rifle scope and hit him in the eye, killing him. Given how close the sniper’s eye must have been to the rifle, it is likely there was merely a few seconds to act.

Hathcock also killed a female Viet Cong sniper known as “Apache”. This woman was a platoon commander and fierce interrogator. She gained the name “Apache” because of the methods she utilized while torturing members of the South Vietnamese Army and U.S. Marines, particularly letting them bleed to death. In interviews later conducted with Hathcock, he told Richard Marcinko that one of her trademark maneuvers involved cutting her victim’s eyelids off and keeping them as souvenirs. In another interview, he said that she often castrated her captives. Her death thus helped boost American morale at a time when it was desperately needed.

One particularly arduous mission saw him targeting a specific high-ranking North Vietnamese Army officer in 1967. This is also rumored to be the only time he removed the white feather from his hat. Without any details of the mission, he volunteered and accepted it without hesitation. Over four days and three nights, Hathcock crawled inch-by-inch over 1,500 yards of fields. Hathcock himself said he was nearly stepped on as he remained camouflaged within the vegetation. Further, at one point he narrowly avoided a bamboo viper bitten him. Finally, as the officer exited his camp, he fired. A single shot struck the officer in the chest and he died. After this mission, Hathcock’s first deployment was up. He returned to the US. However, missing life as a Marine Corp, he returned to Vietnam in 1969 and took command of a whole platoon of snipers.

Most impressively, up until 2002, Hathcock held the record for the longest kill. He took down a Vietcong soldier from over 2,000 meters away using an M2 HMG .50 caliber with a scope. A Canadian Master Corporal named Arron Perry beat this shot with a record of 2,310 meters. He used a McMillan TAC-50 rifle. Since then, several people have beaten the record. Interestingly, an unnamed Canadian sniper holds the current record. Occurring in May 2017, this sniper shot a distance of 3,540 meters during the Iraqi Civil War. Like Arron Perry, he used a McMillan TAC-50 rifle. Hathcock’s record, however, remains very impressive for its time.

How did it all end? What was his legacy?

On the 16th September 1969, the same year he returned to service, Hathcock was medically evacuated. His career as a sniper in Vietnam came to a sudden end. Along with fellow marines, Hathcock was traveling along Route 1 on an AMTRAC (an amphibious vehicle introduced in World War Two). The AMTRAC hit an anti-tank mine and exploded. In a heroic move, Hathcock saved the lives of seven fellow Marines. Though the mine knocked Hathcock unconscious, he awoke just in time to rescue his injured comrades through blazing flames. He suffered severe burns and a helicopter came to evacuate all eight injured Marines. They were first taken to the hospital ship USS Repose, then to a hospital in Tokyo, before heading to a hospital located in San Antonio.

Upon recovery, Hathcock helped establish the Marine Corps Sniper School in Quantico Virginia. Though in frequent pain from his injuries in Vietnam, he battled through. In 1975 the doctors sadly diagnosed Hathcock with Multiple Sclerosis. Though he remained in the Marine Corps for a while, his health declined rapidly. In 1979 the Marine Corps discharged him on the grounds of medical disabilities and he received one-hundred percent disability pay. Hathcock was greatly saddened by this move but continued to provide instruction to police departments and certain military units such as the SEAL Team Six. It was with great sorrow that he passed away, aged fifty-six in 1999.

How did we thank him for his service? Hathcock received numerous awards and decorations throughout his life: a Silver Star, a Purple Heart, a Navy Commendation Medal, a Navy and Marine Corps Achievement Medal, a Good Conduct medal, a National Defense Service Medal, a Vietnam Service Medal, the Gallantry Cross, and the Vietnam Campaign Medal.

Just looking at a few of these more closely: the Marine Corps awarded Hathcock a Silver Star in 1996 for his heroic efforts in 1969 saving his fellow colleagues. This is a personal valor decoration awarded for “gallantry in action against an enemy of the United States”. It is the third-highest personal decoration for valor in combat. Further, the United States Armed Forces also awarded Hathcock a Purple Heart military decoration. The Forces award this accolade to those “wounded or killed in any action against an enemy of the US or as a result of an act of any such enemy or opposing armed forces”.

Several people and company have also named things in his honor. Impressively, the Springfield Armory also designed a variant of the M1A Supermatch rifle and named it the “M-25 White Feather”. The company placed his white feather logo on the receiver and the rifle possessed a likeness of Hathcock’s signature. Furthermore, annually the National Defence Industrial Association honors a soldier with a Gunnery Sergeant Carlos Hathcock Award. This aims to “recognize an individual who … has made significant contributions in operational employment and tactics of small arms weapons systems which have impacted the readiness and capabilities of the U.S. military or law enforcement.” Finally, the Marine Corps League includes a category named the ‘Gunnery Sergeant Carlos N. Hathcock II Award’. The Marines present this accolade to an “enlisted Marine who has made an outstanding contribution to the improvement of marksmanship training”.