This US Sniper Crawled for 3 Days of Open Field, Killed NVA General & Came Back Without A Scratch 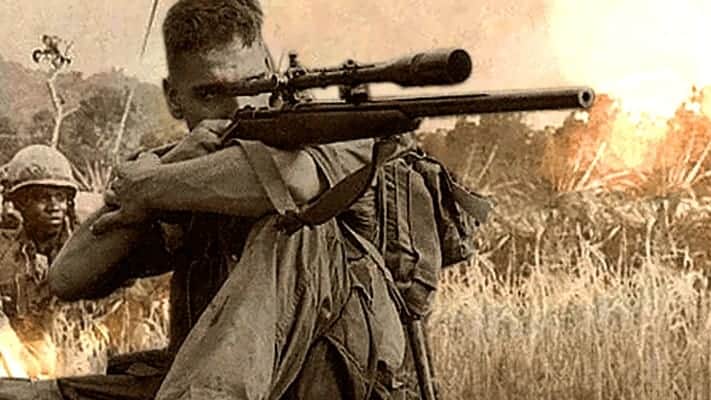 This US Sniper Crawled for 3 Days of Open Field, Killed NVA General & Came Back Without A Scratch

US Marine Corps Snipers were known for their lethal accuracy during the Vietnam war. One such sniper was Carlos Norman Hathcock II who had an astounding kill record of 93. But it wasn’t his numerical achievement that made him a legend. In fact, it was one particular kill and the manner in which he accomplished it that opened the flood gates of fame for him.

He made his way to the hall of fame through never ending hard work and unprecedented dedication to long range shooting. His successes earned him a role as a major developer of the US Marine Corps Sniper training school and he even had a variant of the M21 named after him. It was called the Springfield Armory M25 â€˜White Feather’, which was a name given to him by his enemies, the NVA.

Born on May 20, 1942 in Little Rock, Arkansas, Hathcock took to the sport of shooting at a very young age. He lived in a rural area with his grandmother as his parents had separated. During trips to Mississippi, he started developing an interest in hunting and long range shooting. At that time the victory over the Japanese was still fresh so he would go into the woods with his dog and pretend to be a soldier hunting for the Japanese. His father fought in the war and brought him a Mauser, which was what Hathcock used to hunt.

Growing up, he dreamed of getting into the US Marine Corps and by the time he was 17 he was very firm on his decision. His love for the Marines was so profound that he got married on the same date as the one when Marine Corps were first found, November 10th 1962. His wife’s name was Jo Winstead who gave birth to a son. They named him Carlos Norman Hathcock III.

When the Vietnam War broke out, it was very obvious that the Marines would be the first ones to be sent over. But Hathcock had earned a reputation of being a sniper way before he was sent to Vietnam. He had taken part in several shooting games and bagged many championships. In 1966, Hathcock was sent off to Vietnam where he was assigned the duty of a military policemen. Later on, he was selected as a sniper for his skills when Captain Edward James Land ordered all platoons to have their own snipers. Later on, the significance of snipers became clear and Captain Edwards prioritized Marines who had excellent records in sharpshooting. Hathcock was one of the top names who had won the Wimbledon Cup at Camp Perry for long range shooting in 1965.

The war went on and Hathcock targeting every Vietcong or NVA personnel he could. He eventually bagged 93 confirmed kills by the time the war ended, even though Hathcock later claimed to have taken 300 – 400 enemy soldiers down. During the Vietnam War, for a kill to be conformed, there had to be a third party other than the sniper or the spotter. This wasn’t possible in all cases during the course of a battle so the number was much smaller than what Hathcock stated.

Eventually, Hathcock had gained such a level of notoriety that the NVA put a $30,000 bounty on his head. This was a surprisingly high number as usually, bounties on US snipers ranged from $10 – $2000. There were several Vietnamese marksmen who tried to take the bounty but alas, they failed to outsmart Hathcock on every turn. Hathcock did love to accentuate his character and so kept a white feather, tied to a band in his bush hat. For this, the Vietnamese called Hathcock, “Du kÃ­ch LÃ´ng Tráº¯ng”, which in English means White Feather Sniper.

The NVA decided to eliminate the threat of the White Feather Sniper for once and for all, and sent a platoon of Vietnamese snipers into the area. To their surprise, all Marines were now wearing white feather hats! The Marines put their life on the line so easily as they were aware of Hathcock’s significance.

One of the Hathcock’s most prized achievements was bringing down an enemy sniper with a shot right through his scope into his eye. Hathcock along with his spotter, John Roland Burke were sent on a mission in the nearby jungle to target the enemy sniper. The NVA sniper was called “the Cobra” and was feared for being very capable when it came to long range shooting. He had killed many Marines and was on a mission to eliminate Hathcock. Hathcock waited patiently in the jungle and as soon as he spotted a reflection of light from the Cobra’s scope, he aimed at him, putting the bullet straight into his eye. Later on, Hathcock analyzed the kill and concluded that shooting a sniper through his scope is only possible if both snipers are locked within each other’s sights. This meant Hathcock only had a few seconds to make his move, otherwise he would’ve died. Hathcock had his eyes on the trophy, i.e. the rifle and brought it back but it mysteriously went missing from the armory.

There were several such encounters, another one of which, in Hathcock’s own words is as follows:

“She was a bad woman,” Carlos Hathcock once said of the woman known as â€˜Apache.’ “Normally kill squads would just kill a Marine and take his shoes or whatever, but the Apache was very sadistic. She would do anything to cause pain.” This was the trademark of the female Viet Cong platoon leader. She captured Americans in the area around Carlos Hathcock’s unit and then tortured them without mercy.

“I was in her backyard, she was in mine. I didn’t like that,” Hathcock said. “It was personal, very personal. She’d been torturing Marines before I got there.”

“In November of 1966, she captured a Marine Private and tortured him within earshot of his own unit.”

“She tortured him all afternoon, half the next day,” Hathcock recalls. “I was by the wireâ€¦ He walked out, died right by the wire. “Apache skinned the private, cut off his eyelids, removed his fingernails, and then castrated him before letting him go. Hathcock attempted to save him, but he was too late.”

This was the melting point for Hathcock who made it his primary mission to kill her before any more damage could be inflicted by her. Then on one day, his spotter detected an NVA sniper team moving in at 700 yards. One of them took a break and squatted. Instantly, they knew it was the Apache. Hathcock calls it “the best shot he ever made”. The NVA patrol was aware of the dangers of peeing in the jungle and tried to stop her but she didn’t. It was too late for her anyways and Hathcock put two bullets in her, an extra one just to be safe!

During his time in Vietnam, Hathcock only once removed the feather from his hat. He was in volunteer mission, just before the end of his first tour. He crawled almost 1500 yards in search of a high ranking NVA officer. The mission was classified and he wasn’t given the details until he swore to accept it. The hunt took 4 days and 3 nights, and had absolutely no margin for error. He crawled all the way while wearing camouflage. Hathcock said that he was so immersed into the environment that once he was almost walked over. He was also at risk from nature and was almost bitten by a snake. However, he kept his calm and didn’t move much to avoid any attention. He waited at his position patiently until the officer came out of his encampment. Hathcock seized the moment with a single shot to the chest.

After the super-impressive mission of the killing the General, Hathcock was sent back to the US in 1967 as his tour ended. But he missed his duty there and joined his mates in 1969. This time, he was given the command of an entire platoon of snipers.

All was well, when one day, Hathcock’s career came to an abrupt end. In September 1969, north of LZ Baldy, just along Route 1, Hathcock’s amtrack was blown up by an anti-tank mine. Fire broke out and Hathcock took the charge of taking out 7 injured marines. He, himself was severely burned and it was clear that it would take a long time before he was on his feet again. Hathcock got a Purple Heart for his conduct.

30 years later, his actions were again put under the microscope and he was awarded the Silve Star. The injured marines were taken to the hospital ship USS Repose via a med-evac and then Tokyo Naval Hospital. But the severity of the burns was so much that they had to be admitted for long term treatment, and they were sent to the Brooke Army Medical Center, Texas.

Regarding, his tools of trade, Hathcock, normally operated with the Winchester Model 70, 30-06 Caliber rifle along with an 8 power scope. He did however adapt according to the conditions and once even used the M2 Browning machine gun! He used the machine gun as a sniper rifle with a 10x Unertl scope. He managed to get a couple of kills with the machine gun at 1000 yards. At one point, he broke all his records and got a confirm kill at 2500 yards from this very weapon. As sidearm, Hathcock carried a Colt M1911A1 pistol.

By the time Hathcock was declared fit for active duty, the war was over. Now, he was put in charge of developing the Marine Corps Scout Sniper School in Quantico Virginia. But even then he wasn’t perfectly alright and was in pain from the burns. However, he didn’t want his knowledge to be wasted and continued his service of teaching snipers.

In 1975, Hathcock’s health took a toll for the worst. A checkup revealed he had multiple sclerosis. He continued his service nonetheless but after it became clear that further strain could lead to fatal conditions, he was retired just 55 days before his 20 years record would be complete, allowing him a full retirement pension. As he was medically retired, he was given 100 percent disability benefits however he was stripped of his pension, as he was 55 days shy.

He went into depression because of the forced retirement as he felt he had been betrayed by the people he loved the most. His wife nearly left him during this time but eventually Hathcock’s condition improved. He took up the hobby shark fishing and got out of depression.

He then shared his expertise with police departments and special military units like the SEAL Team 6.

Hathcock’s ability to survive through situations was attributed to his will to “get in the bubble” and put himself in a state of complete focus, both with his equipment and his surroundings. He was shown a passage from Ernest Hemingway, “Certainly there is no hunting like the hunting of man, and those who have hunted armed men long enough and like it, never really care for anything else thereafter.” Hathcock agreed with this and loved it so much that he copied it down on a piece of paper. Later on, he said that it was the hunt that truly drove him, and even though he loved shooting, he never enjoyed killing. He did it as part of his job because if he let them go, then there would be no purpose for the Marines.

His son followed his footsteps and enlisted himself in the Marine Corps. He retired from duty once he reached his father’s rank, Gunnery Sergeant and given a member seat at the Board of Governors of the Marine Corps Distinguished Shooters Association.

Carlos Hathcock passed away on 22nd February 1999 in Virginia from the disease that had forced retirement upon him, sclerosis.