Here is what Happened when a King Tried to Create an Army of Giants - Yes, Giants 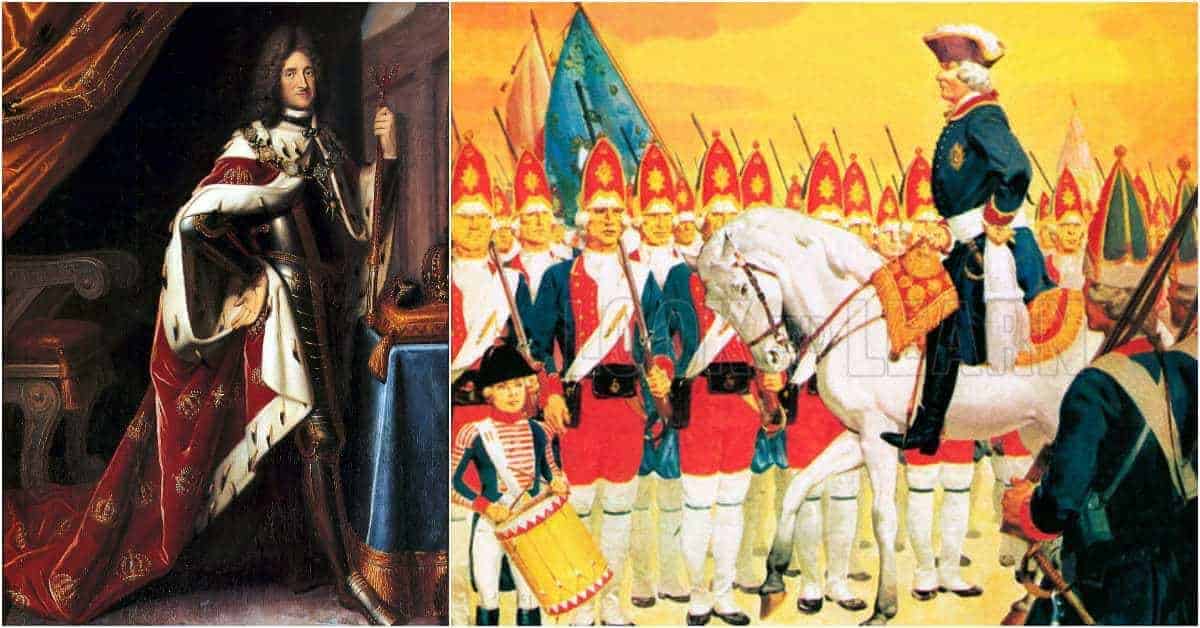 Here is what Happened when a King Tried to Create an Army of Giants – Yes, Giants

Frederick had a particularly testing relationship with his eldest surviving son, Frederick II (who went on to become Frederick the Great). The king wanted him to follow in his footsteps and become an exemplary soldier as well as a fine ruler. He went to extraordinarily psychopathic lengths to drill this into him. As a child, Fritz was woken up every morning to the sound of cannon fire. At the age of six, rather than toy soldiers, Fritz was gifted his very own regiment of children, who he was to train as cadets for the future. Not long after that, his father presented him with every child’s dream: his own mini arsenal.

However, the young Fritz soon showed himself a lover rather than a fighter. Music, reading, and the arts occupied his interest far more than military drills, and his father took out his frustration by punishing him with a strict Protestant education and handing out regular—and very public—beatings. In 1730, the 28-year-old Fritz tried to escape to England with his tutor, and an officer of the King’s Guard, Hans Hermann von Katte. The two were intercepted, however, and after a court-martial found Katte guilty of desertion, the king ordered for Fritz’s tutor to be beheaded.

Katte’s execution drove an even greater wedge between the king and his son. There were even rumors, propagated by the great French writer Voltaire, that the king had pushed to have his son illegally executed alongside his beloved tutor. But it didn’t mark the point of no return. Gradually, Frederick relaxed his attitude towards his son’s liberal pursuits. By the time of Frederick I’s death in 1740, the two were at least on speaking terms, with Frederick II coming to understand his father’s greatness as a head of state, if not as a father figure.

The Soldier King ultimately died in the same manner he had lived. Days before his death, the 51-year-old king was asked to inspect his coffin. Finding it to his liking, he remarked, “I shall sleep right well there.” He then began making his final arrangements and a priest gave him a bible reading. While reading from the Book of Job, his priest uttered the line, “Naked I come from my mother’s womb and naked I shall return.” The Prussian king at this point interrupted him and said, “No, not quite naked. I shall have my uniform on.”

As for the Potsdam Grenadiers, Frederick II saw no real need to maintain a regiment of—what now numbered 2,500—giants. So he began sending the grenadiers to serve in other units in the wars to come. The Grand Grenadiers of Potsdam were finally dissolved in 1805, but their legacy long outlived the regiment’s lifespan. An example of eugenics, in the mid-nineteenth century, Charles Darwin would cite them as the one instance of selective breeding amongst humans rather than livestock.

And, as we all know, the Potsdam Grenadiers weren’t the last experiment with eugenics to come out of Prussia (or Germany more broadly). Hitler’s concept of eugenics was pooled from Prussian militarism and contaminated with misinterpretations of Darwinian theory. This all had roots in Frederick’s Potsdam Grenadiers, who may not have taken a life during their regiment’s existence, but would go on to set a costly precedent. Being the big men that they were, however, they were always going to leave a long shadow.

The Potsdam Giants: How the King of Prussia ‘bred’ an army of super-soldiers – History Answers UK