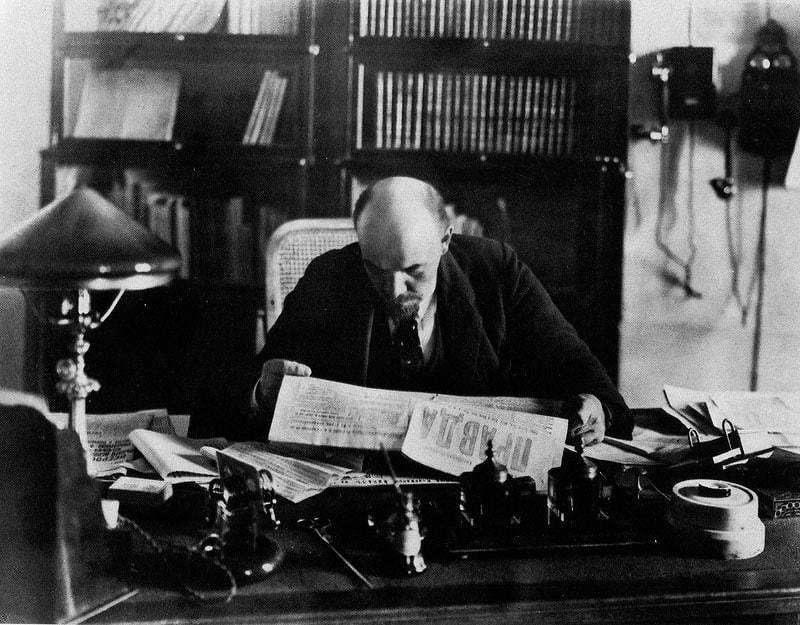 On this day in 1918, Lenin was shot after speaking to workers at a factory in Moscow. The Soviet leader is shot twice by a member of the Social Revolutionary party, a rival of the Communist Party. Lenin had repressed the party and many of its members were killed or imprisoned. Lenin was gravely wounded but he managed to survive.

Lenin was born in 1870, to a respectable middle-class family in southern Russia. He was drawn to the revolutionary cause after his brother was executed in 1887 for his role in a conspiracy to kill the Tsar. Lenin was a gifted young man and he eventually went to university to study law. He became a lawyer, but he began to associate with revolutionaries and he helped to organize Marxist groups in the capital. They became known as the “Union for the Struggle for the Liberation of the Working Class. Lenin and the other leaders of the Union were arrested. Lenin was jailed sent to Siberia.

After returning from exile, in 1900, Lenin went to Western Europe, where he continued his revolutionary activity. It was now that he changed his name to Lenin. He had a brilliant mind and this together with his fiery oratory made him one of the leaders of the Russian revolutionaries.

In 1902, he published a pamphlet which argued for the creation of a group of dedicated revolutionaries to secure the revolution in Russia. In 1903, established the Russian Social-Democratic Workers’ Party (RSDWP), with other Russian radicals. This movement split and the minority group became known as the Bolsheviks and they were led by Lenin.

After the outbreak of the Russian Revolution of 1905, Lenin returned to Russia. He played a leading role in the movement to reform the Empire and at this time the Tsar granted many reforms. However, once order, was restored, the czar restored the old system and Lenin was again driven into exile.

Lenin was against the war. However, it was the war that allowed him to return to Russia. In 1917, the Russian Empire was on the verge of defeat in the war and there was mass starvation, and in February a revolution seized power from the Tsar.

Lenin returned and organized and led the October Revolution in 1917 that swept the Bolsheviks or Communists to power. Lenin returned to Petrograd (St Petersburg) after the assassination attempt and he took personal control of the civil war and the direction of the revolutionaries.