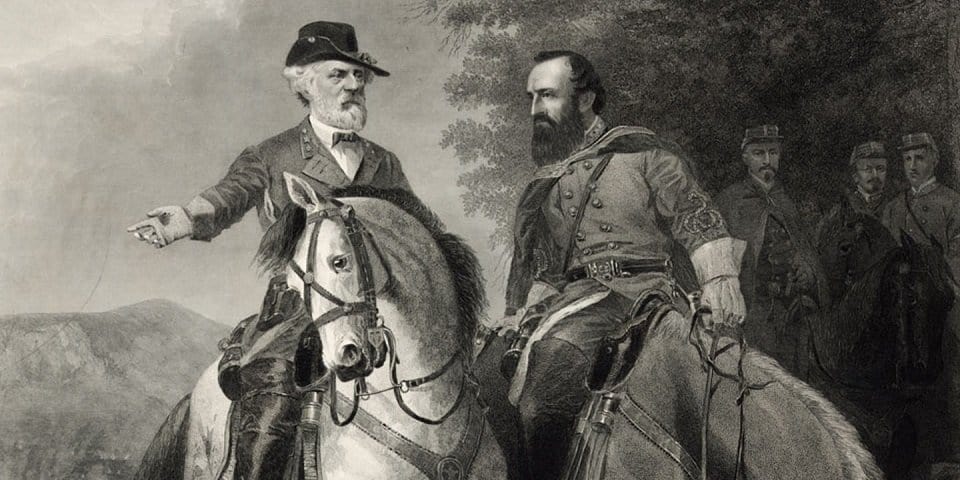 In 1866, one year after the surrender of the last Confederate Army in the field at Bennett Place, North Carolina, The Ladies Memorial Association of Columbus, Georgia, resolved to establish a date throughout the South to memorialize the soldiers who died for the Confederacy. The first Confederate Memorial Day was established as of April 26, 1866. Since then several states which had formed the Confederacy have celebrated Confederate Memorial Day, albeit on different days of the year and with different names. Texas designates the day as Confederate Heroes Day, held on January 19. Alabama. Florida, and Georgia celebrate the day on the fourth Monday of April.

22. The Lost Cause defined slavery as a positive good

The symbols of the Lost Cause, the statues, memorials, holidays, and writings, all present slaves as happy in their lot. They are portrayed as being protected by the Confederacy from the depredations of the Northern Invader. In 1881 Jefferson Davis, former president of the Confederate States of America, published The Rise and Fall of the Confederate Government. In it he defended the system of slavery in the South, and argued that the North benefited economically from Southern slaves. He maintained that the condition of slaves in the South was far better than as was depicted in abolitionist literature and other groups in the North, and that the Union had unleashed the causes of the sufferings of Southern blacks through freeing the slaves.

Davis wrote of the black’s “servile instincts” which “rendered them contented with their lot, and their patient toil blessed the land of their abode with unmeasured riches”. He also contended that allowing the freed slaves to vote almost immediately was a recipe for disaster, which led to the failure of Reconstruction, in the eyes of the Lost Cause proponents. Davis wrote, in reference to the freed slaves, “The tempter came, like the serpent of Eden, and decoyed them with the magic word of freedomâ€¦He put arms in their hands, and trained their humble but emotional natures to deeds of violence and bloodshedâ€¦” Ironically, in another document, Davis once noted, “â€¦history is often the manufacture of the mere liar”.

23. The Lost Cause movement created America’s memorials honoring the Confederacy

From the end of Reconstruction through the beginning of the 21st century, proponents of the Lost Cause continued to revise the history of the antebellum South and the American Civil War. They argued that state’s rights, the Constitutionality of secession, and individual freedom were the causes of the Civil War, not slavery. The argument ignores the fact that secession and promotion of state’s rights were legalistic points intended to allow states to continue to hold men, women, and children in bondage, as chattel property, and to expand the practice into new territories. The fact of Confederate leaders believed in and supported white supremacy, easily discerned from their own writings, is clear. Yet monuments were built to honor them throughout the country.

One historian, Allan Nolan, has called the tenets of the Lost Cause a “caricature of history”. Nolan suggested a new study of the critical period “â€¦from the premises of history unadulterated by the distortions, falsehoods, and romantic sentimentality of the Myth of the Lost Cause“. For generations that myth was taught in classrooms, described in books both scholarly and entertaining, depicted in films and television, and reinforced in monuments and memorials. From it, the divisiveness of the Civil War still troubles the national psyche, and informs American politics. It continues to be reinforced by bloggers, politicians, neo-Confederates, and even some museums and conventions. It was not only the memorials which continued divisiveness in America, as Lee predicted, but the motives behind them.

“The Half has Never Been Told: Slavery and the Making of American Capitalism”. Edward E. Baptist. 2014

“7 Things the United Daughters of the Confederacy might not want you to know about them”. Kali Holloway, Salon. October 6, 2018

“Road to Tara: The Life of Margaret Mitchell”. Anne Edwards. 1983

“Frankly, My Dear: Gone with the Wind Revisited”. Molly Haskell. 2010

“The Rise and Fall of the Confederate Government”. Jefferson Davis

“The Myth of the Lost Cause and Civil War History”. Gary W. Gallagher, Allan Nolan