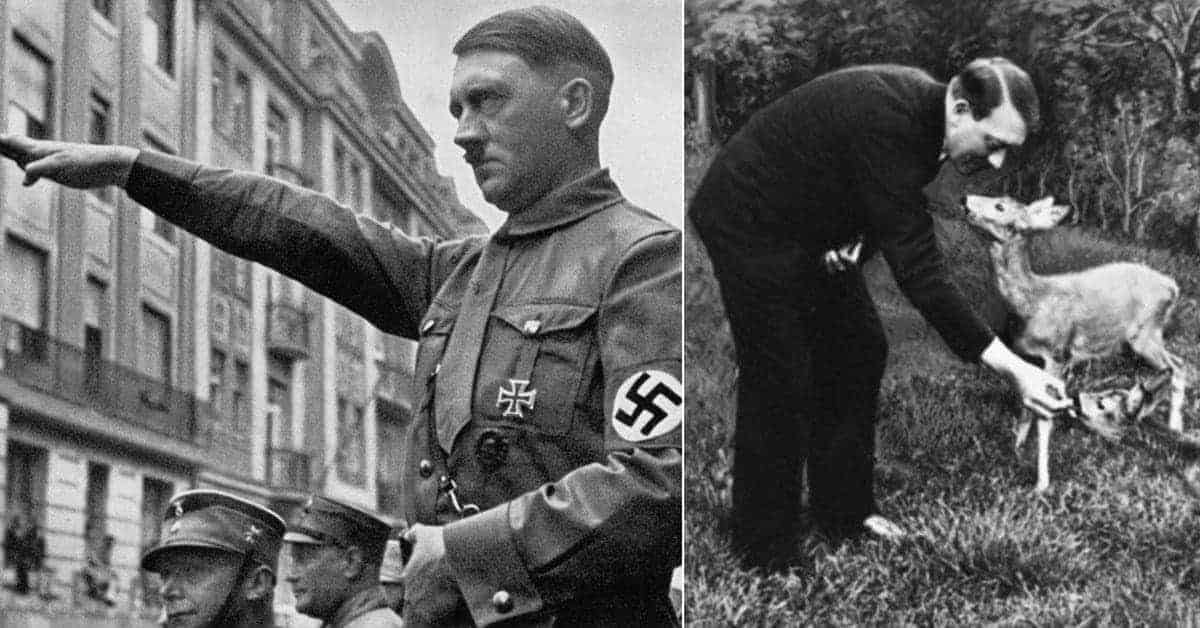 The Nazi prohibition on animal cruelty was far-reaching and comprehensive. During its years in power, the Nazi party passed laws prohibiting anything that could cause an animal distress. It was made illegal to injure animals while making films or to produce foie gras by force-feeding geese. Special regulations were drafted regarding the legal way to transport animals from place to place. And the prevention of cruelty to animals was considered so important that it became a mandatory subject in school.

Not only were all German children taught about the right way to treat animals, but they were instructed to admire Hitler for his commitment to the well-being of animals. A Nazi children’s publication once asked German children, “Do you know that your Führer is a vegetarian and that he does not eat meat because of his general attitude toward life and his love for animals? The Führer is an ardent opponent of any torture of animals… thus fulfilling his role as the savior of animals.” In this instance, Hitler’s stance against animal cruelty was presented as an example of his innate benevolence.

The hypocrisy between Nazi treatment of animals and their treatment of humans seems absolutely staggering. Hitler had sympathy for animals, but none for people. There are accounts of Hitler watching movies with his associates that shows the different ways he viewed animals and people. During scenes where animals were killed, Hitler would become upset and cover his eyes. But if he witnessed a scene where animals were killing people, he had no trouble watching.

So, the question of why Hitler would be a vegetarian has puzzled historians for a long time. But there are two theories that could offer an explanation. The first possibility is that many Nazis didn’t see vegetarianism as an ethical choice. Rather than being about trying to prevent suffering, these laws may have actually been tied up in Nazi theories about race. And Hitler’s theories about race and vegetarianism are likely due to the influence of his favorite composer, Richard Wagner.

Wagner proposed that man’s original diet was vegetarian. The move towards eating meat was, in Wagner’s mind, the cause of a gradual mental and physical decay in the human species. Hitler seems to have held similar opinions and for Hitler, anything he believed in was tied up in a wider conception of racial superiority. Hitler was striving to create a race of Germans that were physically, morally, and mentally superior. Thus, refusing to eat meat was part of the effort to improve the fitness of the German race. In the transcripts of Hitler’s dinner-time rants, he often mentions a future where Germans are strong because they are all vegetarians.

That explanation doesn’t quite gel with the fact that the Nazis seemed genuinely concerned about stopping cruelty to animals. That’s why they banned the boiling of lobsters alive and vivisection. And it’s why they put so many restrictions on hunting. These acts aren’t meant to prevent people from eating meat, but to prevent animals from being harmed. So why would the Nazis hate to see animals harmed but have no problem doing all the things that they wouldn’t do to animals to humans? Vivisection was performed on human beings in the concentration camps, for example.

Answering that question reveals how vegetarian Nazis were able to justify the Holocaust. It explains how a nation of seemingly normal people can be goaded into a massive effort to marginalize and destroy other human beings. It’s something that is as old as war itself: a psychological mechanism called “dehumanization.” It’s something that happens all the time. In every war and every act of genocide, the first step is for a nation to somehow convince itself that the people they want to kill aren’t really human. The Nazis were masters at this.

Thousands of hours of propaganda were produced simply to argue to the German people that Jews were not worthy of their compassion. The central message behind the Holocaust was that not only were the Jewish people not “German,” they weren’t even people. And not only were they sub-human, they were a threat to Germany. Thus, they needed to be destroyed. Historians argue about how many average Germans really thought this way, but the architects of the Holocaust all certainly did.

Hitler seems to have been able to tie these two perverse ideologies together. That explains why he was able to seem to have empathized with animals and still have not felt the least bit of remorse about the deaths of millions of people. Hitler’s view of the world placed the German people above everything. In his mind, the Germans were a master race destined to control the entire world. And not hurting animals was simply the way that a master race should behave.

Hitler’s dedication to animal welfare and vegetarianism served two purposes in his mind: it strengthened the German nation and placed the German people in the proper balance between man and nature. By the same token, Jews, Slavs, and other “sub-humans,” had no place in that balance. Hitler’s ultimate goal was to destroy these people and make way for a world with a single master race. Thus, their extermination was necessary for the future of the German race and not really even wrong. As Hitler saw it, they were lower in the natural order than animals.

Neo-Nazi groups who venerate Hitler and excuse his crimes sometimes point to his vegetarianism as an example of why he wasn’t evil. In truth, it’s just the opposite. Hitler’s vegetarianism reveals just how evil he was. The hypocrisy reveals how he truly thought of anyone he considered as non-German. It shows us how well he and other Nazis were able to dehumanize others and convince the German nation to do the same. More importantly, it’s a lesson for the future. People today are just as capable of convincing ourselves that some people aren’t “people” as the Nazis were. And the horror of the Holocaust teaches us what that can lead to.