Today in History: Architect of the Holocaust Hanged in Israel (1962) 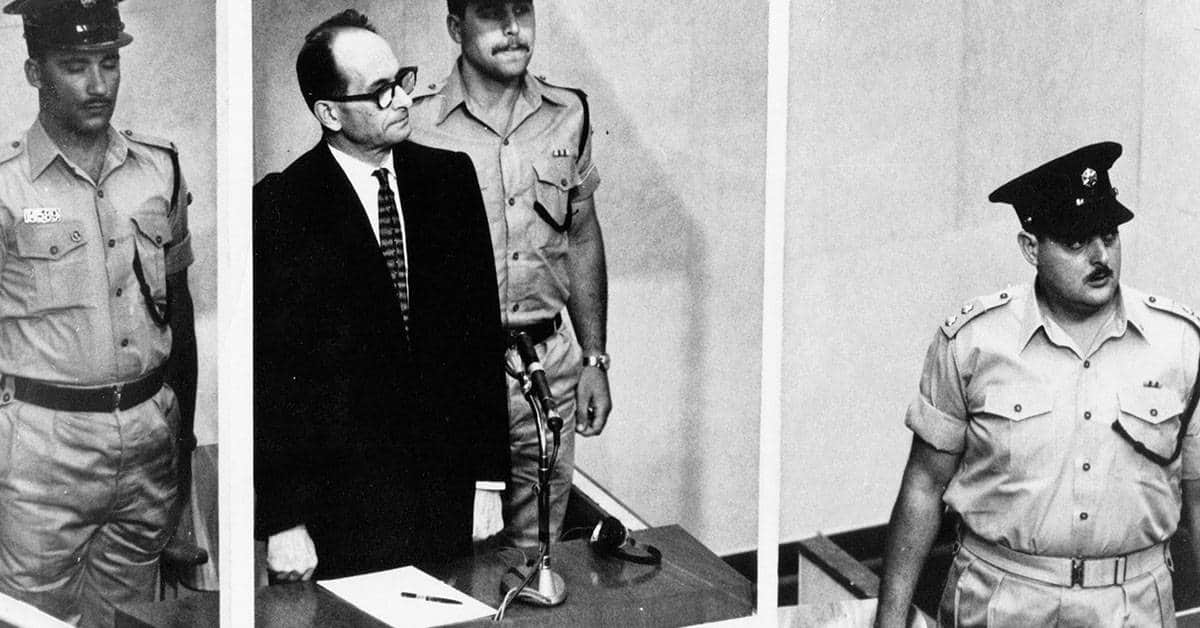 Today in History: Architect of the Holocaust Hanged in Israel (1962)

The Holocaust remains one of the worst human tragedies ever perpetrated by mankind. Adolf Hitler usually gets most of the blame for organizing the Holocaust, and that is a reasonable argument. Hitler was a dictator who orchestrated and propelled the ideals that led to the Holocaust.

Others, however, were the tools that Hitler used to implement his vision. Otto Adolf Eichmann, often called the Architect of the Holocaust, was perhaps the man who Hitler relied on the most to bring about his “Final Solution to the Jewish question.”

Eichmann joined the Nazi’s SS organization in 1932 where he quickly rose up the ranks. The SS was responsible for many things in Nazi German, from policing, gathering intelligence, and enforcing most of Hitler’s anti-Semitic policies. Throughout the late 1930s, Eichmann was put in charge of ridding both Vienna and Prague of Jews. After that he was promoted to the Jewish section of the SS central security office, where he would soon become the organizer of so-called “Final Solution.”

In 1942, after a meeting in Berlin where the Nazis decided to exterminate the Jewish population of Europe, Eichmann was assigned the tasked of coordinating the identification, assembly, and transportation of all Jews in Germany and any conquered lands. Terrifying and terrible, are only two of the words that can describe the monstrous efficiency Eichmann showed at this task. Under his program, between 3 and 4 million people of Jewish decent were either gassed or worked to death in Nazi death camps. Another two million were killed in other camps, sometimes with other equally horrific methods.

Following the war, Eichmann was captured by US Troops, but escaped in 1946. He lived under an assumed identity for the next dozen years until Israeli intelligence captured him in Argentina. He was captured in 1960. The Israelis’ knew that Argentina would be unlikely to extradite Eichmann, who was living as Ricardo Klement, so they planned an illegal abduction of the man. ON May 11th of 1960, Eichmann was abducted off the streets of San Fernando (part of Buenos Aires), and then he was flown to Israel to await trial.

His trial started on April 11, 1961 in Jerusalem. Besides being notable for the crimes that Eichmann committed, the trial is also famous for being the first trial to ever be televised. He faced 15 criminal charges including crimes against Humanity, war crimes, and crimes against Jewish people. Despite his not-guilty plea (He claimed he was just following orders from higher-ups in the Nazi establishment), he was found guilty on all 15 counts. On May 31, 1962, Eichmann was hanged in Tel Aviv for his crimes. He was cremated and his ashes thrown into the sea.

It is always hard to decide who gets the most blame when it comes to such horrific crimes. Is it the leader of the country who propose such terrible things or is it the people who carry out those orders? Historians have argued this for decades, but in the end, most conclude that there is enough blame to go around, and that justice is all that matters.