"It Was Our Holocaust, But Nobody Cared": What You Don't Know About the Brutal End of WWII for the Germans 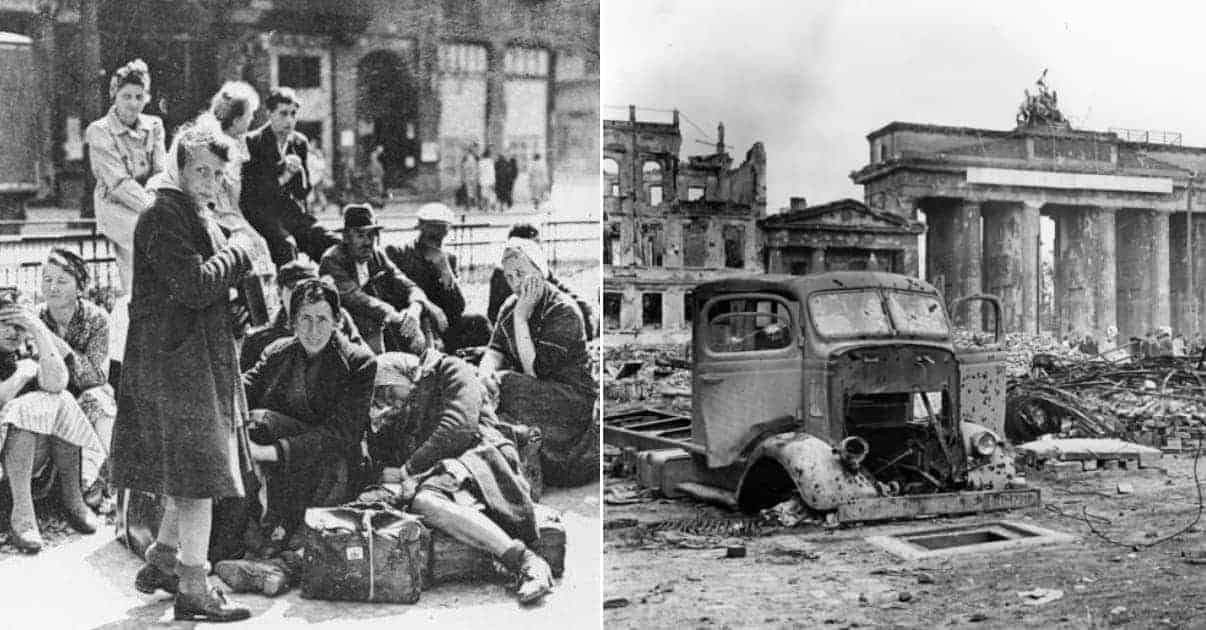 “It Was Our Holocaust, But Nobody Cared”: What You Don’t Know About the Brutal End of WWII for the Germans

By late 1944, the end of WWII was in sight. The Western Allies were pushing the Germans out of France as the Eastern Front rapidly collapsed under the weight of the Soviet Red Army. Now, the ordinary citizens of Germany were trapped in between the advancing armies. Starvation and misery were common as the country was blocked off from receiving supplies from the outside world. And as the Soviets pushed the German army back to their homeland, they prepared to take a terrible revenge against the German people.

After all, Russian losses during the war had been staggering. Close to 40% of all Russian men born in 1923 who were alive at the start of the war died during the conflict. When you account for German atrocities against the civilian population, it’s estimated that 20,000,000 Soviet citizens, 15% of the pre-war population, was dead by 1945. As the Soviet troops advanced towards Berlin, their hatred towards the Nazis could no longer be contained. They wanted revenge. And as the first Soviet troops entered German soil in East Prussia, the civilians began to get an idea of what that revenge would look like.

In October 1944, Soviet troops captured the small German village of Nemmersdorf. Within a short time, German troops managed to drive out the Soviets, only to be greeted with a scene of unimaginable horror. Not a single civilian in the village was left alive. The men and boys were all executed. The women had their infant children ripped from their arms, only to watch as their heads were smashed in. The women themselves, young and old alike, were raped and murdered. Their bodies were crushed underneath the treads of tanks, and many had been nailed through the hands to the doors of barns or to farm carts.

Word of what happened at Nemmersdorf soon spread back towards Berlin. Everywhere in Germany, people began to fear for what would happen when the Soviets reached their homes. As the Soviets advanced ever closer, the atrocities continued, condoned and even encouraged by the officers. Leonid Rabichev, a Russian soldier, reported how his unit encountered a group of German refugees on the road to Berlin. He wrote that the Russians, “flung themselves in the thousands upon women and girls. Their commanders, their majors, and colonels stood on the highway, and some laughed while others directed.”

These attacks were also not limited to the Eastern Front. Though less common on the Western front, they occurred there as well. Some historians have suggested that American troops may have raped over 100,000 German women during the war and occupation. The total number of rapes in Germany may have been as high as 2,000,000. And as the wave of atrocities swept across Germany, many Germans worried that the entire country might be exterminated. For his part, Hitler welcomed the idea. In his fortified bunker in Berlin, he was preparing to make sure that the German people died along with his Reich.

The Germans referred to the final months of WWII as the Götterdammerung, or the “Twilight of the Gods,” referring to the battle between the gods that Norse mythology says will lead to the end of the world. The Nazis intended to make that legend come true for the German people. Hitler and many Nazi leaders saw the war as an apocalyptic struggle between the German people and the “Asiatic hordes” of Russia. Now that the war was lost, the Nazis prepared themselves for the annihilation of the German people. As Propaganda Minister Joseph Goebbels declared, “If we are compelled to leave the scene of history, we will slam the door so hard that the universe will shake.”

And as Hitler promised before the war in Mein Kampf, “Germany will be a great power or it will not be at all.” Now he prepared to make that promise come true. Every German male between 16 and 60 who could lift a rifle was conscripted and ordered to hold off the Soviet advance. By now, most Germans understood the war was lost and few were willing to die in defense of Hitler’s regime. So, Hitler ordered SS troops to execute any man who tried to leave his post. He was determined that every German would fight to the bitter end.

But if the older soldiers were ready to quit, the young were far more devoted in their devotion to the Führer. Boys from the Hitler Youth as young as 12 were given weapons and ordered to the front. Many German commanders refused to send children to die for a lost cause. But the children often proved to be the most fanatical soldiers Hitler had left. Soviet patrols advancing into Berlin often encountered groups of Hitler Youth who fought to the death. Others committed suicide before surrendering.

In March, Hitler issued the “Demolitions on Reich Territory Decree.” It was an order to destroy everything of any value left in Germany. Roads, bridges, factories, everything would be demolished. It was a sign that Hitler saw no future for Germany after the war. It has since become known as the “Nero Decree,” since, like Emperor Nero supposedly did, Hitler would burn down everything around him. He preferred to see Germany destroyed rather than defeated. But Armaments Minister Albert Speer, realizing what it would do to post-war Germany, refused to comply with the order. In April, Hitler emerged from his bunker for the last time to award a group of twelve-year-old Hitler Youth soldiers with Iron Crosses for their heroism in the defense of the city.

On April 30, 1945, with the Soviets almost in control of the entire City of Berlin, Hitler shot himself in his bunker. On May 7, 1945, Germany officially surrendered unconditionally. The Nazi regime had been responsible for the most destructive conflict in history. And though the world had known for years about the mass death being orchestrated in the Holocaust, it wasn’t until Allied troops entered the concentration camps in the final months of the war that the true horror became widely known. With the Nazis now defeated, the Allies needed to decide how much to punish the German people for the crimes of the Nazis.

There were two camps in the Allied governments competing over what to do with Germany after their surrender. One group suggested the best course of action was to completely eliminate Germany’s ability to wage war ever again. This group gathered around a plan written by US Secretary of Treasury Henry Morgenthau. Morgenthau suggested that Germany be stripped of factories and reduced to a completely agricultural nation. They would never be permitted to build up industry ever again. This plan found a champion in President Roosevelt, who brought it to the British.

After a lengthy debate, the Allies decided to adopt a much more lenient policy towards the defeated Germans. And at the Yalta conference in February 1945, the Allies gathered to decide Germany’s ultimate fate. It was decided that the country would be split up into separate occupation zones, with West Germany under the control of America, France, and the UK, and East Germany falling under the control of the Soviet Union. Large swaths of territory were also to be annexed by Poland and the Soviet Union. Furthermore, the Allies demanded reparations from the Germans for all the destruction they had caused.

For the most part, these reparations took the form of forced labor. The Allies already had millions of German POWs under their control. The Western Allies sent most of their POWs to France and the countries the Germans had occupied during the War. Most were forced to clear minefields, which resulted in hundreds of deaths, or to perform agricultural labor. But for the most part, German POWs in the West were all allowed to return home by 1948-49. In the East, where the Soviets held close to 3,000,000 German prisoners, conditions were far harsher

Many were poorly fed and forced to perform dangerous work. It’s estimated that 1 in 3 of these German POWs in the Soviet Union died. It wasn’t until 1956 that most of the surviving POWs were finally allowed to return to Germany. Ethnic German civilians in many countries also suffered harsh treatment after the war. In Poland, which had been transformed into a Soviet client state, ethnic German civilians were rounded up and herded into labor camps. Hundreds of thousands of these people perished in the brutal conditions.

Germans in many other countries occupied by the Nazis had their homes and property seized. Now homeless, many died from exposure, disease, or hunger. The total number of dead is widely disputed. Most estimates are around 400,000 to 600,000, but the German government puts the figure closer to 2,000,000. For the most part, the world had little sympathy for these deaths. After all, so many other people had already died at the hands of the Nazis. As one East German refugee described their treatment at the hands of the Soviets, “It was our Holocaust, but nobody cared.” Ultimately, not even the people of Germany escaped the destructive consequences of Hitler’s megalomania.