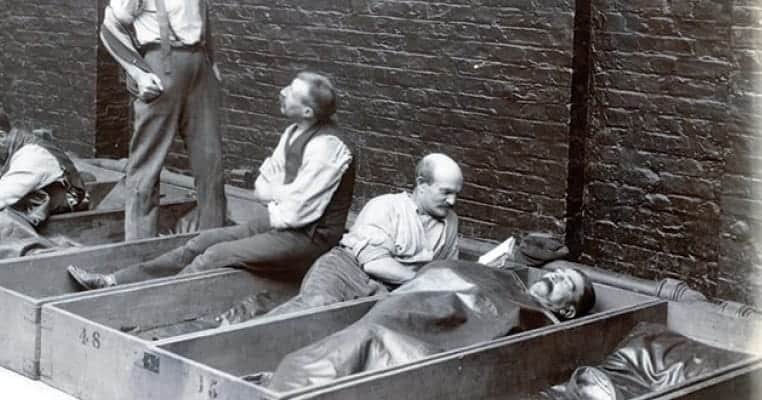 5. Most middle-class Londoners believed the residents of the city’s slums were to blame for their own misfortune.

For much of the 19th century, middle and upper-class Londoners could simply pretend slums didn’t exist at all. The ‘two Londons’ rarely, if ever met. Indeed, a well-to-do Londoner would have had no reason to venture into a slum – even the poor, desperate prostitutes usually went into the main city to try and find clients. Indeed, for decades, the East End of the British capital was widely referred to as ‘darkest London’. It was a completely unknown world, a terra incognita, for ‘respectable’ Londoners, and they were happy for it to remain that way.

Then, when it became impossible to deny the existence of the slums, or question how horrible the living conditions really were, many well-off Victorians resorted to blaming the poor for the state of their housing. In popular newspapers and journals, the poor were dismissed as lazy and decadent, with the terrible conditions of the slums of their own choosing. It was only in the mid-1850s that campaigners started convincing the public that slums were the result of poverty, unemployment and social exclusion rather than the result of the ‘sinfulness’ of their occupants.

4. Construction of railway tracks led to the destruction of many slums, leaving thousands destitute and homeless.

In the 1850s and 1860s, London underwent a transformation. The age of the railways had come, and lines were being built to connect the capital with other English cities. These lines were to run out of the center of London, meaning many buildings would have to be demolished to make way for progress. While the owners were compensated for their loss, anyone renting a room was not. In all, it’s estimated that around 56,000 people lost their dwellings in the space of a decade, with the poorest Londoners the worst hit by the railway clearances.

Some slums were lost completely. Agar Town, which had been home to thousands of families, including a large Irish immigrant community, was totally demolished in order to make space for warehouses for the Midland Railway. The slum’s occupants had to find cheap accommodation elsewhere. This heralded the beginning of the end of the city center slum, and the start of the rise of the suburban slum. At the same time, some slums were simply demolished to make way for upper-class housing. The historic slum of Tomlin’s New Town was torn down and replaced with fashionable ‘Tyburnia’, just north of Hyde Park. This was gentrification 1850s style – and the poor were the big losers.

3. The 1875 Artisans’ and Laborers’ Dwellings Improvement Act should have improved things but really little changed for the poorest of the poor.

By the 1870s, the British government decided that something must be done about the country’s worst slums. Significantly, this was not because they wanted to improve the lives of the people living in them. Rather, they were more concerned about citizens living outside of the slums. Experts had long been warning that the terrible conditions of the slums posed a health risk to the middle and upper-classes. What’s more, police chiefs warned that slums were becoming hotbeds of crime and perhaps even revolutionary fervor. The Conservative government, led by Prime Minister Benjamin Disraeli called for the “elevation of the people”.

The 1875 Artisans’ and Laborers’ Dwellings Improvement Act gave local councils the power to buy up areas of land and then demolish the slums built upon them. Significantly, however, councils were not compelled to do so – so many chose not to. Not only was it expensive for them, but it also risked upsetting the rich men who owned the buildings of the slums. In the end, just 10 of 87 towns in England and Wales had used the powers granted them under the 1875 law to demolish slums. People would carry on living in misery for another 20 years at least.

2. In the 1880s, rich Londoners started going undercover in the slums – and ‘slumming’ became a big business.

The relative failure of the 1875 Dwellings Improvement Act might have been bad news for the poorest members of London’s working class, but it was good for the tourist industry. In the 1880s, London experienced a boom in so-called ‘slum tourism’. For the men and women of polite society ‘slumming’ became a fashionable activity, albeit one with an added sense of danger. They would don scruffy clothes and put dirt on their faces and then venture into the slums of Whitechapel or Shoreditch to see first-hand the poverty and deprivation they had only ever read about.

Undoubtedly, the ‘slumming’ phenomenon was hugely offensive. Many people did find amusement in witnessing misery and loved bragging about their brushes with danger. At the same time, however, slumming had some positive points. Up until the 1880s, many people dismissed the slum’s residents as feral drunkards. Seeing them in real-life convinced richer Londoners that most poor people were respectable and hard-working, albeit down on their luck. As a result of their slumming experiences, some notable individuals were inspired to start campaigning for better housing for London’s working class. What’s more, encounters between rich gentlemen and lower-class women were also credited with breaking down class barriers and reshaping gender relations.

1. Poverty tourism might have been in bad taste but did help bring about improvements for the masses.

Towards the end of the 19th century, a number of individuals, as well as groups, began to take an active interest in poverty and deprivation, not just in London but across England. Despite the risks, a significant number of middle and upper-class women, including aristocrats, went ‘slumming’ in London’s East End, disguising themselves in poor clothes, in order to gather data on the lives of the people living there. Eyewitness accounts by the likes of Lady Constance Battersea helped sway public opinion, with slums increasingly seen as a symptom of what was wrong with society at large.

Alongside these prominent individuals, several notable groups also stepped up their campaigning efforts. Some were Christian, driven on by their faith, though others were driven by just a sense of social justice. Schools and libraries were set up with the aim of helping the working classes escape poverty, while pressure was put on the government to improve sanitation and clamp down on criminality in the city’s worst slums. Though much was still to be done, by the end of the century, slums were no longer seen as a ‘disease’ and something to be ignored, but as social ill to be addressed head-on.

“Homelessness in Victorian London: exhibition charts life on the streets.” The Guardian, January 2015.

“Victorian London’s East End: what can a foul murder tell us about life in the city?” History Extra, June 2018.

“Dirty Old London: A History of the Victorians’ Infamous Filth.” NPR, May 2015.

Juvenile crime in the 19th century.” The British Library.