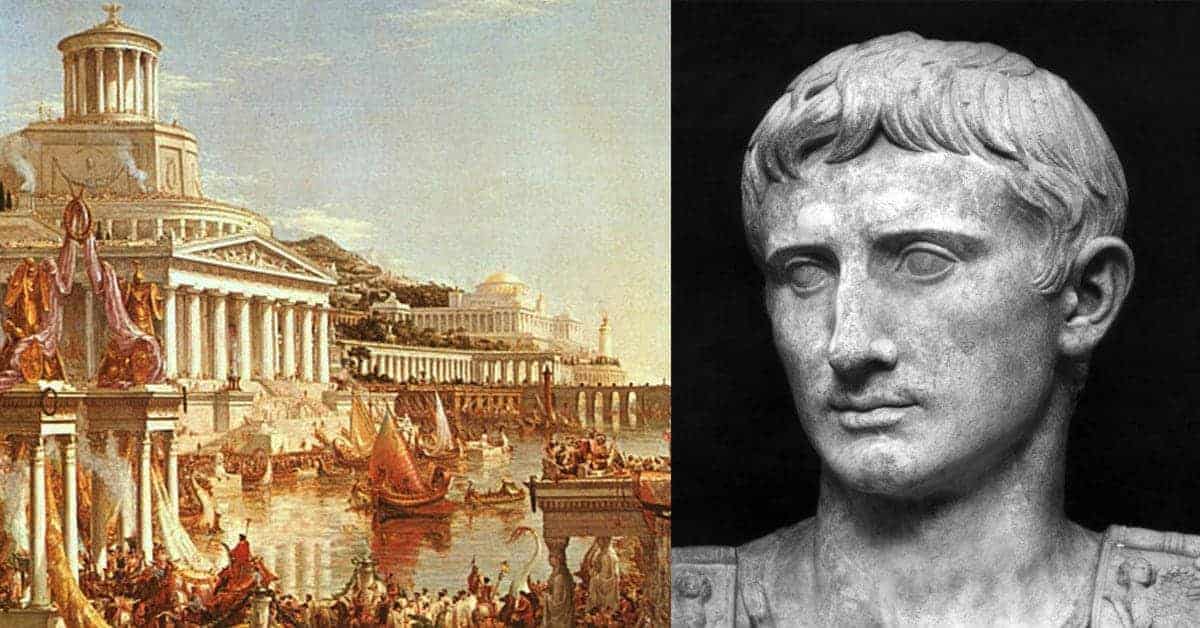 At first glance, Geta probably seems like an odd choice since he was only in power for little over two and a half years and hardly made a dent in Roman history. Alas, he still compares favorably to the truly dreadful leaders that followed him. Geta was the younger son of Septimius Severus; Caracalla was his older brother. Emperor Severus planned for both of his sons to reign together but jealousy ensured they could not rule in harmony and the premature death of one was inevitable.

Historians suggest that Geta shared Caracalla’s bad temper, but he was nowhere near as cruel or idiotic. Although Geta suffered from a stammer, he didn’t let it stop him from surrounding himself with intellectuals and writers in a bid to become more literate. Caracalla refused to share power with his brother although he had no choice from 209 until February 211 when Severus ruled with both sons. Once he died, however, Caracalla wasted no time in making his bid for sole power.

Of the two emperors, Geta was the better fit for the throne. Although he didn’t necessarily display the characteristics of a good ruler, at least he made an effort to improve his literacy and thought processes. This appears to be the mindset of a man who was determined to better himself and if he had become emperor, perhaps the Crisis of the Third Century could have been averted or at least its impact might have been minimized.

In any case, Caracalla had Geta murdered in December 211; the unfortunate young man died in his mother’s arms. As it was, Caracalla ruled until 217 when a soldier murdered him. His reign was known for its cruelty, instability, and inability to handle invasions from Germanic tribes. Caracalla was followed by several ineffectual emperors and when Alexander Severus was murdered by the army in 235, the Third Century Crisis began in earnest.

The brief reign of the ‘restorer of the world‘ is perhaps one of the biggest ‘What If?’ questions in Roman history. When Aurelian came to power in 270, he was in charge of an Empire in dire straits during the midst of the Third Century Crisis. Rome had split in three as the Palmyrene and Gallic Empires became independent; thanks to Aurelian, this was only a short period of complete chaos.

In the space of a few years, Aurelian defeated the Juthungi, Vandals, Sarmatians, Marcomanni, Alemanni, Goths, and Palmyrenes; a feat of military skill unmatched by all but a handful of Roman Emperors. He achieved this during the midst of a domestic crisis as Rome was still reeling from the effects of Cyprian Plague.

As well as doing a remarkable job in keeping the Empire together, he still found time to implement reforms in Rome. First and foremost, he decided to distribute bread to the people rather than grain; and he also added pork and other items to the list of rations. Aurelian improved the distribution and transport of goods. To be fair, he wasn’t successful in every reform; his attempt to handle the coinage crisis failed, and he abandoned his low-cost wine initiative rather early. Nonetheless, he was an Emperor that brought much-needed stability to the Empire; and Diocletian was able to benefit from that less than a decade later.

Alas, Aurelian’s disciplinarian attitude was not popular in the army, and he was eventually assassinated by his disgruntled troops in what was a terribly short-sighted maneuver. Although the Third Century Crisis soon ended with the Diocletian’s reign, his desire to farm cabbages in Croatia meant that the Empire was soon in crisis once more.

When Justinian I died in 565, he left an Empire that had expanded immensely during his reign but if anything, it was overstretched. As impressive as his list of conquests was, Justinian left his successors an enormous problem in terms of dealing with new enemies, an army with a dangerous level of influence, anger from citizens because of high taxation and a treasury that wasn’t exactly full. His immediate successor, Justin II, canceled the annual bribe to the Persian king which led to war in the East.

By the time Maurice became Emperor in 582, the Avars, a group of Turkish nomads, had established themselves as a real threat in the northern Balkan region. Eventually, after suffering several setbacks, Maurice established a delicate balance in the East, and during the Civil War in Persia (591-592), he helped Chosroes II become king. The newly crowned monarch showed his appreciation by signing peace agreements which resulted in the return of territory and fortresses previously lost by the Byzantines.

Unfortunately, Maurice was seen as a ‘penny pincher’ by the army who soon plotted to get rid of him. The Byzantine army in the Danube mutinied and marched on the city of Constantinople. They crowned a centurion named Phocas the Emperor and Maurice, along with his entire family, were executed in 602.

It was a disastrous move by the army because Phocas was a terrible leader. Chosroes was appalled when he heard the news of Maurice’s deposition and death and declared war on Phocas and the Byzantine Empire. The ensuing Byzantine-Sassanid War lasted 26 years and significantly weakened both empires. The Byzantines won, due to the skill of Heraclius, but it spelled disaster in the long term. Soon after the end of the war, a new threat appeared on the horizon. The Arab Islamic Empire made short work of the Sassanids and almost captured Constantinople less than half a century after the end of the Byzantine-Sassanid War.

The reign of Leo III ‘the Isaurian’ was the beginning of almost 60 years of good rule and marked the start of a Byzantine recovery. When he died in 741, he was succeeded by his son, Constantine V, who was almost as good a ruler as his father. He faced opposition immediately from his brother-in-law, Artabasdos, but defeated his enemy within 18 months.

Although he is best known for his iconoclastic policies, Constantine was generally an excellent ruler who had a good grasp of how to manage the resources of the state. He reorganized the ‘theme’ system and created tagmata, new army field divisions. The purpose of the new system was to reduce the possibility of conspiracies and improve the Empire’s ability to defend itself.

While he didn’t make any concrete gains, Constantine’s reign is noteworthy for the fact that he went on the offensive against the Arabs. For the previous century, the Byzantines were intent to cling on to their possessions, with limited success. He was also successful in the Balkans with significant victories over the Bulgarians near the Anastasian Wall and at Marcellae. Although the Bulgarians inflicted heavy casualties on the Byzantines at the Battle of the Rishki Pass in 759, Constantine gained revenge at the Battle of Anchialus in 763.

He died in 775 while planning another campaign against the Bulgarians. Constantine’s son, Leo IV, became the new emperor but only reigned for five years. By the end of the eighth century, the Byzantines suffered significant losses against the Bulgarians and also against the Arabs under Caliph Harun al-Rashid. The Empire was only able to recover on the Eastern front due to an outbreak of civil war amongst the Arabs in 842.

The death of Basil II was hardly a surprise since he reigned for nearly 50 years and was almost 70 years old when he died. However, the Byzantine Empire badly missed the excellent leadership of Basil; a fact only highlighted by the lack of quality of the people that succeeded him. Basil succeeded the able John I Tzimiskes in 976 and spent the early part of his reign dealing with rebellions. The first was by Bardas Skleros while the second revolt was started by the man sent to deal with Skleros, Bardas Phokas.

Once he defeated Phokas in 989, Basil was able to get on with the process of cementing his Empire’s position. During the rebellion period, Basil also contended with the Bulgarians and his first attempt to subdue them was unsuccessful. However, he eventually ground them down and forced surrender in 1018 but only after approximately two decades of war.

Overall, Basil’s reign is considered as the peak of Byzantine power in the medieval era. By the time of his death in 1025, the Bulgarians were Christian, and a number of important and powerful families in Kiev were also converted or in the process of doing so. The Byzantine Empire appeared to be in fantastic shape at that point. It was wealthy, its bureaucracy was effective, and its army was battle-hardened and large. Basil expanded territories in the Balkans and eastern Anatolia but his successors were unable to keep everything in check.

Despite his age and length of reign, Basil left no heir and his brother, Constantine VIII, who was technically his co-emperor, ruled alone but only for three years before he also died. Constantine’s daughter, Zoe, took over and married a succession of men who proved to be weak and ineffectual rulers. These emperors foolishly reduced investment in the standing army and the militias on the frontiers. Byzantium’s enemies seized the initiative and groups such as the Normans and Pechenegs threatened the empire. The Seljuk Turks however, did the most damage including a crushing victory at Manzikert in 1071.

The first three members of the Komnenid Dynasty were arguably the last great rulers that the Byzantine Empire had. When Alexios took the throne in 1081, the empire had lost Asia Minor, the Normans were threatening the west, and the Pechenegs were invading the east. Alexios stabilized the situation while his successor, John II, recovered territory in the west of Asia Minor. Manuel I became Emperor in 1143 and strengthened the empire’s position in the Balkans while his armies also began the difficult process of trying to take back land in Anatolia.

Of course, his reign was not without mistakes. He was far too ambitious in his territorial aims, and his great campaign against the Turkish Sultanate ended in disaster with a defeat at the Battle of Myriokephalon in 1176. Despite the vast sums spent on warfare which left the treasury bare, the Empire’s Western provinces enjoyed an economic revival which carried on from the days of Alexios.

Manuel was extremely popular with members of his court who referred to him as the ‘divine emperor.’ Chroniclers in the next century also lavished him with praise by saying he was ‘the most blessed of emperors,’ and he was ‘great in fine deeds.’ Even with the setbacks against the Turks, the Empire was still considered a great power and enjoyed a booming economy.

However, Byzantium needed a strong leader to hold everything together, and while Manuel certainly fitted the bill, his successors did not. When he died in 1180, his son and successor, Alexios II, was just ten years of age and was under the influence of his mother, Maria, who was a Frankish princess. Hostility towards ‘foreign’ influence led to the murder of Alexios in 1183 while his usurper, Andronikos I, was executed two years later. Subsequently, internal squabbling occupied the empire and allowed enemies to regain territory. Within a quarter of a century of Manuel’s death, Constantinople fell for the first time. It was the beginning of the end.