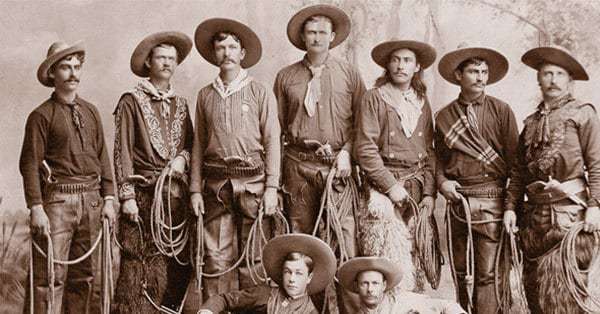 Emigrants, settlers, and soldiers faced an uncertain and dangerous future in the aftermath of the American Civil War. Bitter postbellum rivalries continued to divide the North and South, while people from literally all walks of life flocked west. Some genuinely sought a fresh start beyond the banks of the Mississippi River, but the untamed plains were full of dangers. Recalcitrant Native Americans stormed white settlements and scoundrels took advantage of unsuspecting travelers. Often, the only thing standing between life and death was a trusted firearm. Whether wielded by lawmen, soldiers, or private citizens, these are the five rifles that won the West.

In one of the boldest sales pitches in American history, arms designer and inventor, Christopher Miner Spencer, walked up the steps of the White House and presented his rifle, along with a handful of ammunition, directly to the President of the United States. A day later, he convinced Abraham Lincoln and then Secretary of War, Edwin Stanton, to purchase his weapon for use by the Union Army. From there, the rest was literally history. The United States ordered over thirteen thousand rifles and carbines for use against the Confederacy, with total numbers produced exceeding 100,000 at the height of the Civil War.

Thousands of surplus Spencer rifles and carbines made their way to the frontier, either in the hands of war veterans, frontier army soldiers, or cunning sutlers looking to turn a profit. Spencer’s unique design was the first repeating rifle adopted by the U.S. military. Unlike other rifles of the period, the Spencer featured a lever-action block that fed rounds from a tubular magazine. This configuration reduced reloading time and thus allowed marksmen to fire subsequent rounds in concentrated succession (about 20 shots per minute). Miserly officials felt that troops would waste ammunition with such a quick-firing weapon, however, so the Spencer never completely replaced single-shot rifles.

Spencer repeaters were incredibly potent weapons. General Ulysses S. Grant claimed that they were some of “the best breech-loading arms available.” During the Modoc campaign of 1872-73, the U.S. Army’s First Cavalry Regiment carried Spencer carbines, while clawing through the treacherous mountains and valleys of northeastern California. The carbine remained a favorite among cavalrymen up until the early 1890s, even though more sophisticated long arms had officially replaced the weapon. The Spencer Repeating Rifle Company declared bankruptcy in 1868, which also contributed to the weapon’s eventual decline. Nevertheless, Spencer paved the way for repeating rifles by establishing a significant precedent in firearms development.

Picking up the pieces of Christopher Spencer’s shattered venture was the business mogul, Oliver Winchester. The American entrepreneur purchased the remnants of the Spencer Repeating Rifle Company when it fell into bankruptcy in 1868. Winchester, unlike Spencer, was not an inventor. He had a nose for chance prospects, however, and saw the potential of repeating rifles possibly even before Spencer, who didn’t develop his signature weapon until 1859. Winchester, on the other hand, bought the Volcanic Repeating Arms Company in 1850, helped patent the Henry repeater in 1860, and eventually launched the Winchester Arms Company in 1866.

The first Winchester lever-action repeater was the Model 1866, based on the Henry repeater, colloquially called the “Yellow Boy” because of its brass receiver. A major improvement over the earlier Henry repeater, the Model 1866 featured a loading gate and tubular magazine forward of the trigger (many earlier repeaters were loaded through their butt stocks, which limited ammunition capacity).

The Model 1866 saw worldwide use, with approximately 60,000 units sold to France and the Ottoman Empire from 1866-71. Over the better part of a century, Winchester produced eight additional models of their long gun, with the Model 1873 achieving popularity as “The Gun that Won the West.”

The Model 1873 Winchester was manufactured for fifty years, with more than 700,000 units produced during its run. It was released in four different styles and chambered in three popular calibers, including the immensely successful .44-40 Winchester. The real brilliance of the Winchester was in its ammunition, which consisted of high-powered pistol cartridges that could be used interchangeably between common revolvers of the period. The Model 1873 was favored by lawmen and private citizens but was also popular with criminals and renegades. Despite its checkered past, the Winchester is still one of the most iconic guns of the West.

The Winchester owes its roots to two earlier long guns, the Volcanic Repeater and the Henry repeating rifle. The former fell into obscurity, due to its unreliability and substandard ammunition, while the latter went on to become one of the premier long arms of the West. The Henry rifle was the brainchild of Benjamin Tyler Henry, a gunsmith that previously worked with Horace Smith and Daniel B. Wesson. The three men collectively failed to market an improved version of the Volcanic Repeater. Smith and Wesson moved on to produce revolvers, while Benjamin Henry remained in the long gun industry. He obtained a patent for his own rifle design in 1860.

A distinguishing feature of the Henry, later inherited by the Winchester, was the placement of a tubular magazine directly underneath the barrel of the weapon. This was a vast improvement over single-shot rifles or repeaters with stock magazines. Critics frequently cited that the Henry lacked the durability of contemporary repeaters, such as the Spencer, due to its intricate magazine and reliance upon black powder cartridges.

What the Henry may have lacked in punch and reliability, however, was made up for in its fantastic capacity and rate of fire. A skilled shooter could hold respectable groups while emptying the Henry’s sixteen-round magazine in about half a minute.

Another feature Henry shared with the Winchester was its somewhat dubious reputation in the eyes of the American public. Settlers, cowboys, and mail carriers routinely used the rifle to defend themselves across the American Interior, but large numbers of the weapons also fell into the hands of the Plains Indians. The Sioux and Cheyenne decimated George Armstrong Custer with Henry at the Battle of Little Bighorn. Despite this ominous legacy, the Henry repeater set the stage for the Winchester and was an influential weapon in its own right. Over 14,000 units were produced in its seven-year run and were some of the most desired weapons on the frontier.

Unlike the three preceding long guns, the Sharps Model 1874 was not a repeating rifle. A single-shot breech-loader, Sharps earned the reputation of being some of the most accurate and powerful rifles on the Great Plains. Using the brawny .45-70 Government cartridge, the Model 1874 could deliver a terrific wallop by propelling a 500-grain bullet more than 1,000 yards. Other incarnations of the rifle, such as the “Big Fifty,” made use of even more monstrous cartridges, but fell out of favor with the introduction of smokeless powder. In practice, basically-trained shooters could routinely drop targets at distances up to 500 yards with the Model 1874.

Christian Sharps, a career-gunsmith, designed his first rifle in 1848. Over the next thirty-three years, various versions of Sharps’s initial design were patented or manufactured by a variety of companies. The initial model was produced in Philadelphia, with subsequent versions released in Vermont and Connecticut. Although used extensively throughout the Civil War, Sharps rifles grew in popularity with the introduction of the Model 1874, which earned the reputation of being an accurate and reliable large-bore weapon. Military and sporting variants of the Sharps rifle appeared over the years and were some of the most widely-used breech-loaders in the Old West.

Renegade Indians were one of the greatest threats faced by white settlers following the Civil War. During the 1860s, most Native American raiders resigned themselves to using surplus weapons, such as aging muzzle-loaders. Nonetheless, scrupulous traders routinely sold improved firearms to many tribes, with lever-action repeaters becoming the favored weapons of many warbands.

While these carbines were used with devastating effect, long-range rifles, like the Sharps Model 1874, could keep repeater-wielding marauders at bay. Big-bore Sharps rifles also played a prominent role in the destruction of wild buffalo herds, a development that many historians cite as the death knell of Indian resistance on the frontier.

Arguably combining the best of both worlds, was the Model 1873 “Trapdoor” Springfield. A single-shot breech-loader, the Springfield featured the ballistic characteristics of large-caliber weapons, like the Sharps rifle, while still maintaining a modest rate of fire. Chambered in .45-70-405 Government, the Springfield boasted a higher muzzle velocity than the Sharps and comparable accuracy. Its unique “trapdoor” action additionally allowed a skilled shooter to fire approximately 15 rounds per minute, nearly matching the output of several magazine-fed weapons, such as the Spencer rifle. Ordnance officials selected the Model 1873 as the standard service weapon of the U.S. Army, over 98 competitors, based upon these excellent characteristics.

The Springfield series of “trapdoor” service rifles were based on a much earlier improvised weapon, the Model .58 Allin conversion Springfield musket. Army officials previously considered adopting a breech-loader as their standard service weapon, but their plans were placed on hold at the outbreak of the Civil War. As the war ended, the army invited inventors and gunsmiths to find a way to convert its thousands of surplus muskets into breech-loading rifles. Erskine S. Allin, a Springfield armorer, patented a method that involved modifying the older Model .58 that was met with tremendous acclaim. Five subsequent revisions culminated in Model 1873.

The “trapdoor” Springfield, unfortunately, suffered from extracting issues, prompting many critics to question the reliability of the weapon. Early rifles were originally issued with copper cartridges, which expanded too rapidly in the trapdoor block, preventing the extraction of expended shells and the reloading of the weapon. Compounding the matter was Custer’s disastrous 1876 defeat at Little Bighorn. Most soldiers were armed with single-shot Springfields, while their Indian assailants carried Henry and Winchester repeaters. Recent scholarship details a variety of factors leading up to the massacre, but popular opinion of the time pointed to reliability issues with the Springfield rifle and carbine.

An improved Springfield “trapdoor,” with increased reliability and accuracy, eventually superseded the Model 1873. Nevertheless, Springfield gained the respect of many soldiers, who saw extensive action across the Great Plains. With over 700,000 rifles and carbines issued to the U.S. Army, the Model 1873 was involved in many major engagements of the Plains Indians Wars. Several specialized versions of the weapon, including sporting and officer models, also appeared on the frontier. In hindsight, the Springfield was met with mixed reviews but served as the workhorse of the U.S. Army during the apex of the Plains Indian Wars, deciding the outcome of numerous battles in the West.