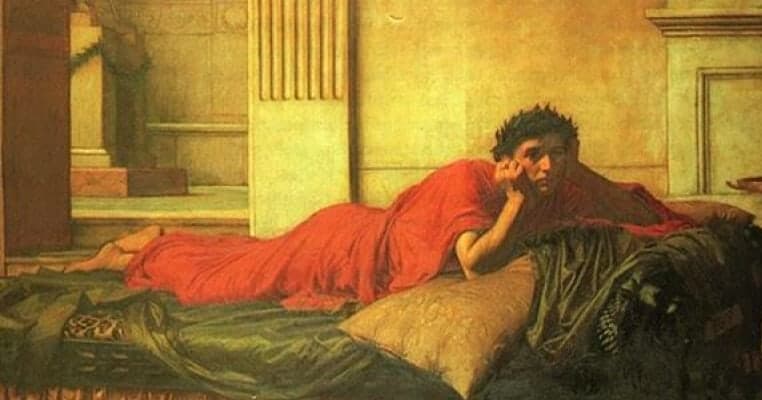 After Nero’s death, the citizens of Rome reputedly celebrated in the street. However, some also mourned. The Greeks were one group. However, there were also some in Rome who still revered Nero. According to Suetonius, it became customary for people to lay spring and summer flowers on Nero’s grave in the years after his death and some even erected the emperor’s statue on the rostra in the forum. Others continued to circulate Nero’s edicts as if he was still alive — while rumors began to circulate that the emperor was not dead but would return to “confound his enemies.”

The fact no one had seen Nero’s corpse fanned the flames of these rumors-as did his private burial. The rumors were also not helped by the fact that Nero’s natal chart reputedly foretold he would lose his empire- only to recover it in the east. However, whatever their initial basis, the rumors of Nero’s survival did not go away, and over the next twenty years, not one but three individuals claiming to be Nero came forward and tried to take the empire.

The first false Nero emerged just months after Nero’s death in the place where the emperor was most beloved: Greece. This false Nero gathered a group of army deserters and set sail for Italy. However, Emperor Galba, who took the imposter seriously sent forces out to intercept and kill Nero and return his decapitated head to Rome for public display. For the next ten years, all was quiet on the imposter front as the empire settled under the stabilizing rule of Emperor Vespasian. However, after Vespasian’s death, not one but two false Nero’s arose — one during the reign of Vespasian’s eldest son, Titus and the other under his unstable and unpopular son, Domitian.

Both of these false Nero’s were sponsored by the Parthians who after causing a good deal of unrest amongst the Roman ruling elite handed their “Neros” over for retribution. The Parthians’ motives were clear: to humiliate and possibly destabilize their old enemy Rome as much as possible. However, they could not have hoped to succeed in their plans unless they believed the return of Nero would have some support amongst the people of the Roman Empire — particularly in Rome.

Professor Edward Champlin, author of “Nero: The end of a Dynasty” believes Nero was not as universally loathed as people think. He believes it was the “senators…..and leading knights” described by Tacitus that truly hated Nero. The plebian poor who made up 90% of the population of Rome however, was a different matter. These were the people who had benefitted from Nero’s reign, who ” ate his banquets and joined in enthusiastically with his performances.” They were not offended by Nero’s excesses or murderous tendencies — as long as their own lives saw some benefits. They may have turned on Nero at his end. But when times became tough for them, they looked upon his rule as a golden age —and so were all too willing to cling to the idea that — like King Arthur — Nero might return.

The Eunuch Who Was Loved by The Most Depraved Emperor of All Time, Cultura Colective, June 29, 2021